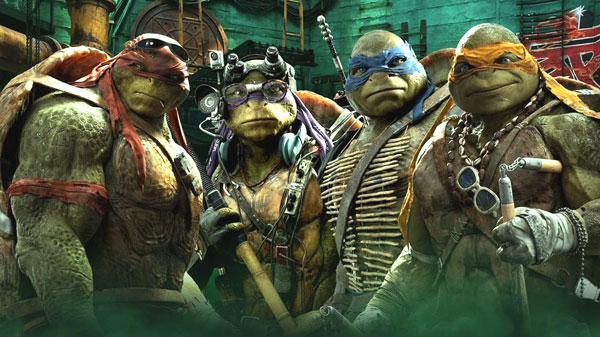 Shelling to a new generation.

TEENAGE MUTANT NINJA TURTLES have been around as a merchandising product forever! In a long list of TMNT comicbooks, cartoons and movies, this 2014 reboot is the latest iteration and definitely the turtliest.

Four ninja mutant turtle teenagers (“Well, when you put it like that, it sounds ridiculous!”) must stop a bladed samurai criminal intent on poisoning New York City and then selling the antidote for a blank check. (Isn’t that the plot of MISSION IMPOSSIBLE 2? Isn’t that also the real life plot of Big Pharm? Sell the public thousands of unessential medications to create side effects and then sell same public thousands of medications that nullify those side effects while creating others…)

Originally a dark satire Mirage Studios comic by Peter Laird and Kevin Eastman (issue #1, May 1984), as with any marketable product that becomes wildly popular, Teenage Mutant Ninja Turtles was overtaken by executives with ponytails and devolved into guys in muppet suits being assfaces.

Adult superhero credibility has been restored to the turtles with director Jonathan Liebesman (WRATH OF THE TITANS) and – I hate to say it! – producer Michael Bay (TRANSFORMERS: AGE OF EXTINCTION) in this action comedy drama that brings a hyper-reality grittiness to the ninjitsu reptilians. Set in the modern world with computers and cellphones ubiquitous, with references to Bale’s BATMAN, X-MEN, HARRY POTTER, etc., there is still the rapid cheesy repartee (and cheesy pizza!), still the fact that these mutated turtles were trained in martial arts by a rat, still the skateboarding and outlandish stunts and facemasks that serve no purpose whatsoever. But CGI and motion capture has enhanced all these attributes and the rugged visualization of the turtles sells it to an audience I’m betting is wider than ever before. Box office tells us so.

Matter of fact, the turtles are the best thing about this movie (thankfully – since they are the subject and the title and the stars and the marketable dolls). Pete Ploszek is blue-masked Leonardo (voiced by Johnny Knoxville), Alan Ritchson is red Raphael, Jeremy Howard is purple Donatello, and Noel Fisher is yellow Michelangelo. Dynamic, eccentric, fun-loving and battle-deadly, they retain a familial chemistry while not being maudlin or annoying, and their visual appearance is muscular (pun intended), with their stuntwork and combat skills breathtakingly realized. It’s analogous to watching BATMAN BEGINS, in how it is surprisingly rooted in the real world, so much so that no one ejaculates, “I love being a turtle!” and that out-of-touch surfer expletive “Cowabunga!” is expressly verboten. (By the way, were they mutated with human DNA, to grow pecs and delts and biceps like Franco Columbu?)

Will Arnett is ambiguously-nutless fellow reporter Vernon Fenwick. Let’s establish from the outset, the word comes from on high, we can’t have any chemistry between the two humans – even though they’re in each other’s prime Pumping Paradigm – because that would detract from the camaraderie and poignancy of the turtles’ relationships to each other and their “father” Splinter (the rat, mocapped by Danny Woodburn, voiced by Tony Shalhoub). That’s okay, sez director, Fox can’t do chemistry anyway and Arnett is here as a fifth wheel.

William Fichtner, as with all his roles, is once again magnetic as CEO/scientist Eric Sacks. Love William Fichtner! In his varied roles, we never know which way Fichtner will turn, from his buffed bad guy in THE LONGEST YARD to skinny good guy in CONTACT, and many times ambiguous in-betweener (ARMAGEDDON, THE PERFECT STORM). Here, he is co-creator of the mutagen that transformed the tiny turtles into super shells, and is a good guy until he has to act opposite vapid Megan Fox, whereupon he tries to shoot her. Technically that makes him the bad guy, but in my book, he’s still the good guy.

Turtles must face the indomitable Shredder (Tohoru Masamune), who looks like a Transformer (Oh, Michael Bay, you rascal!) and his organization of black-garbed podiatrists known as the Foot Clan. Only the turtles’ mutagenic blood will create the antidote to the poison Shredder and Sacks have created, so he must keep them alive while trying to kill them. Linear chase movie/action sequences ensue, with the primo gag being the semi-trailer sliding down a snow slope, pursued by the Foot (is one foot running the same as one hand clapping?). 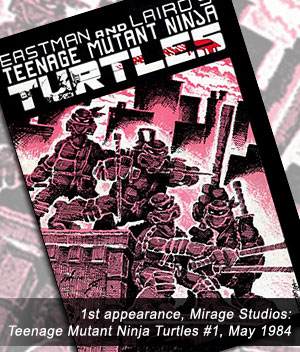