The Impossible Dream of Thou Shalt Not Rape.

Got road rage? The Vatican on Tuesday issued a set of “Ten Commandments” for drivers, telling motorists to be charitable to others on the highways, to refrain from drinking and driving, and to pray you make it before you even buckle up.
— Associated Press, Vatican City, June 19, 2007. 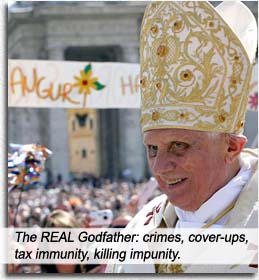 ard to believe that the moribund, superstitious, warmongering institution of pederasts and hypocrites called the Catholic Church, headed by Joseph Ratzinger (holy bullshit pseudonym Pope Benedict XVI) would have the audacity to issue a set of “Commandments” for drivers. Firstly, the Vatican has as much expert knowledge on “driving” as it does on “marriage.” I guess that’s what makes them think they’ve got propriety in decreeing “commandments.”

Secondly – WHAT THE FUCK? Do they think we cannot see through their half-brained scheme to draw attention away from the fact that they can’t keep their knobs in their trousers when they see smooth-buttocked boys?

Because you haven’t laughed that hard today yet – here they are:

THE TEN COMMANDMENTS OF DRIVING.

2. The road shall be for you a means of communion between people and not of mortal harm.

3. Courtesy, uprightness and prudence will help you deal with unforeseen events.

4. Be charitable and help your neighbor in need, especially victims of accidents.

5. Cars shall not be for you an expression of power and domination, and an occasion of sin.

6. Charitably convince the young and not so young not to drive when they are not in a fitting condition to do so.

7. Support the families of accident victims.

8. Bring guilty motorists and their victims together, at the appropriate time, so that they can undergo the liberating experience of forgiveness.

9. On the road, protect the more vulnerable party.

10. Feel responsible toward others.

AP article continues: “Guidelines for the Pastoral Care of the Road extols the benefits of driving — family outings, getting the sick to the hospital, allowing people to see other cultures. But it laments a host of ills associated with automobiles: Drivers use their cars to show off; driving “provides an easy opportunity to dominate others” by speeding; drivers can kill themselves and others if they don’t get their cars regular tuneups, if they drink, use drugs or fall asleep at the wheel.”

“…called for drivers to obey speed limits and to exercise a host of Christian virtues: charity to fellow drivers, prudence on the roads, hope of arriving safely and justice in the event of crashes.”

Lest we forget that only CHRISTIANS hold virtues like “charity to fellow drivers” – everyone else is a just a speeding, lane-cutting, bumper-hugging asshole on the road. Especially those Muslims and Essenes and Sikhs and Protestants and Jews and Zeus worshippers. And who but a pansy christian would ever “hope of arriving safely”? The rest of us hope to arrive upside down on fire.

Who the HELL do they think they are, to issue “commandments”? They only get away with this unconscionable audacity by tacitly adopting the attitude that a “higher power” has mustered these utterly specious generic suggestions of altruism – once again fooling all of the people some of the time, who don’t think to question where the Vatican gets the balls to tell them what they should be doing while the Vatican is busy getting balls.

Well, at least from now on, there’ll never be any more accidents or bad driving. Exactly like when the Ten Commandments were handed down from Sinai and there was no more sin.

You want us to take you seriously, Popo, while you’re wearing that hat?

Ultimately, the displacement tactics failed, for in July ‘07 the Church found itself – like its priests – pushing shit uphill with a stick…

Los Angeles Cardinal Roger Mahony says he apologizes to anyone who has been “offended” or “abused” by members of the Roman Catholic clergy. The leader of the nation’s largest archdiocese says the church will sell buildings, use some invested funds and borrow money to pay out a 660 million-dollar settlement to plaintiffs charging abuse.
— Associated Press, Los Angeles, July 15, 2007. 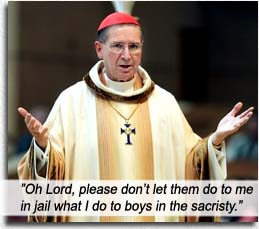 In his monotonal meetings with victims’ families, the despicable Mahony compared raped boys to VHS video tapes, wishing real hard that he could “just rewind them.” He’s getting whiter by the syllable.

AP article: ”The Los Angeles diocese faces more than 500 lawsuits dating back to the 1930s from people who allege they were abused by about 200 priests and lay people.”

Mahony is quoted as saying that the rapes “should not have happened and should not happen again” – he couldn’t be any more decisive and actually say, “WILL NOT happen again” because “should not” means that it probably will – after all, he’s got his eye on that nice tight-trousered Johnson boy…

You’d think they would have adopted this repentant stance… oh, after the TWENTIETH or THIRTIETH pedophile rape, rather than after the five-hundredth pedophile rape cover-up. That’s Catholicism for ya.

Hollow apology unacceptable and unaccepted, Cardinal. Forgiveness? Nah, think I’ll refer to the Old Testament for this one: Exodus 21:23-25: “If any harm follows, then you shall give life for life, eye for eye, tooth for tooth, hand for hand, foot for foot, burn for burn, wound for wound, stripe for stripe.” How come, for all those years of cover-ups, you’re not going to jail to have thick-dicked homos raping YOU, Cardinal? How come your crime boss, Ratzinger, is not going to jail for sweeping your cover-ups and his unholy foot soldiers’ behavior under the carpet? Can any other institution in the world weather 500 cases of pedophilia and continue to function without riots in the streets?

Just as God spoke through the criminal Ratzinger and handed down Ten Driving Commandments (having just woken up to the fact that we’ve stopped riding mules and asses), so too, MY personal lord and saviour, Poffy The Cucumber, whose keen eye was not distracted from the larger issues at hand, has worked through me and bequeathed the Catholic Clergy itself TEN COMMANDMENTS infinitely more auspicious and judicious than the Vatican’s pimped-down vanilla soufflé.

1. Thou shalt not fuck children.

2. Courtesy, uprightness and prudence will help you deal with unforeseen events, like getting caught fucking children and having to pay a settlement of $660 million.

3. Thou shalt not use parishioners’ donations to pay off sex crime settlements.

4. Thou shalt not kill, not counting the two hundred centuries of murder and rape and pillage already enacted upon every other sect on Earth. Starting today, okay?

5. Cars shall not be for you an expression of power and domination – that includes the Pope-Mobile. What’re you scared of, God’s not a powerful enough protector?

6. Remove the beam from thine own eye first, child-rapers.

7. Thou shalt not sell buildings which were purchased for the public good in order to afford legal counsel for your felonies.

8. Try not to read the bible. I think by now it’s safe to say it doesn’t work.

10. You shall not make for yourself an idol, whether in the form of anything that is in heaven above, or that is on the earth beneath – this means all those crucifixes and virgin Mary statues and statues of popes and saints have got to go; it also means “stop kissing the feet of the baby Jesus statue” you dopes; it also means, do not worship money, as you’ve done for the past two thousand years; it also means Michelangelo’s Pieta is as worthless as his Moses; it also means that if you call yourself a christian, do not phone-text your vote for douchebags singing karaoke on national TV.

How does one stick to these nigh-impossible edicts? Well, before a priest enters a church to say mass every morning with all those sinfully creamy boys in attendance, maybe he could try PRAYING.

The Vatican has the audacity to issue “Ten Driving Commandments” amidst their boy-raping scandals.