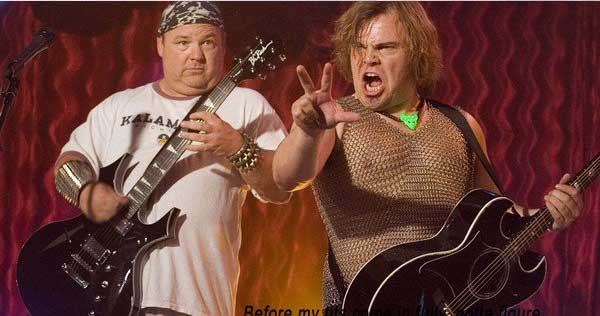 To paraphrase Salieri from AMADEUS, “Displace one ‘fuck’ and there would be diminishment; displace one ‘suck my cock’ and the structure would fall.”

The Poff of Destiny

Belched forth from Satan’s unholy vagina, the dynamo Jack Black and the cherubic Kyle Gass master-explode in TENACIOUS D IN THE PICK OF DESTINY, their foul-mouthed vernacular so integral to the comedic fabric of this film that when the Prudies bellyache “every second word is fuck,” they aren’t far from the truth.

And that’s a good thing.

In making the transition from the live stage and television to the big screen, Tenacious D thankfully steered into the curve, and in chronicling their “rise to power” did not bow to the corporate whiners who would try to widen this movie’s demographic by softening its blows.

And Tenacious D blows a lot.

This movie is a road tale, a rock paean, a musical odyssey, a combo-wombo of JESUS CHRIST SUPERSTAR, The Who and REN AND STIMPY. A veritable Gospel According to Tenacious D.

In the beginning there was Lil’ JB (Troy Gentile, playing young Jack Black like electrodes attached to testicles) whose father (Meat Loaf) would not let him rock. So he petitions the master piper, Dio, for advice (just to hear Ronnie James let fly, “Go – my – son – and – ROOOOOCK!” is worth the journey), following his dream to Venice Beach where verily he didst meet solo minstrel, KG, in a conflagration of Bach, Beethoven and Eine Kliene Nacht Muzik. Thus – with Jack Black’s rocket-fueled psycho-tenor and Kyle Gass’s axe-tastic acoustic – was Tenacious D born from rock thunder and stale pizza.

In contemplating how their legendary heroes could be so smokin’ barbecue tasty, they notice that all of them – Rhoads, Van Halen, Young, Townshend – wield the same guitar pick.

After The Tale of The Pick is revealed by a grizzled master of disaster (Ben Stiller) at – where else? – Guitar Center, they begin The Quest to acquire The Pick, to chase down the Creamy Rock Greatness that it promises.

In a movie carved from the same black sabbatical cloth as SCHOOL OF ROCK, Jack Black once again flies slam-banging, accompanied by the rock soundtrack of MY generation. It is a wonder to behold this hurricane of adrenaline, his every minute action tailored for maximum overdrive. Some viewers comment on PICK OF DESTINY losing impact and drive in the second act, but I would hazard a guess it is simply their lack of appreciation for the tornado appeal of Jack Black.

Not since Martin & Lewis has there been a comedy duo so adroit; like Martin and Lewis, the seeming “straight man” – Kyle Gass – is a master comedian himself, knowing his place in the matchup and lending impeccable timing to the mix. And his guitarwork is freakishly astounding.

Though SPINAL TAP was the progenitor of this genre of rock obliviousness, the lines are fast blurring between the cheese and the rock. Master Exploder scares us into realizing that the gaggers (Tenacious D) are actually more talented than the “serious rockers” they spoof – this is what the Cinderellas and the Y&Ts and the Great Whites actually look and sound like! Ultimately, Master Exploder – featuring Black banshee-wailing as ominously as Rob Halford or Chris Cornell – is Real Rock. Shot from the engorged penis of hell.

If you were weaned on metal, if you are fueled by Satan, you’ll love PICK OF DESTINY and find much to be amused: from the Guitarway to Heaven (director Liam Lynch could not secure the rights from Page and Plant to actually call it the “Stairway”), to the subscription rock magazines, to the big-talking small-fry (Kyle comporting himself around his shithole like it was a palace that “his albums” were paying for), to the rock idol worship, to the CLOCKWORK ORANGE allusion, to the Power Slide from The Who’s Won’t Get Fooled Again (which, as any lombard will tell you, is the most awesome moment in that song), to the fact that Stiller’s rock burnout sage cites Robert Johnson as the first owner of The Pick of Destiny (very cool, considering that Johnson is regarded as the first true guitar god, the man who started rock rolling through the blues).

Paying homage to their wonderboy HBO series, a wealth of familiar faces and situations appear, from the open-mic gig (with announcer Paul F. Tompkins raising ambivalence to suicidal heights), to policeman Kirk Ward, to meeting Lee (J.R. Reed) and battling Satan, with a host of cameos, from Amy Poehler, Tim Robbins (doing his Rade Sherbedgia), Colin Hanks – and Sasquatch!

In the most beauteous twist of all, Tenacious D’s quest to worship Satan through the majesty of rock leads them to a great inner truth: that “Satan is not in a guitar pick – he’s in all our hearts.”

How right they are.