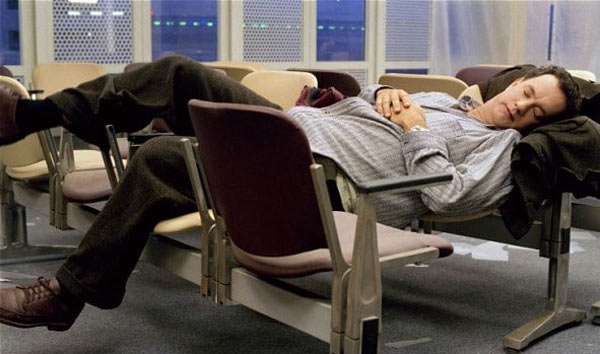 Tom Hanks during the film premiere of THE TERMINAL.

CAST AWAY meets Perestroika in THE TERMINAL, a movie which cannot decide whether it wants to be a drama, a romantic comedy, or just a silly waste of time.

Viktor Navorski (Tom Hanks, sporting a darn good “Russian” inflection) alights at JFK Airport just as his (fictional) country of Krakozhia slides into a military coup. As a result, all Krakozhian passports are suspended and “unrecognized” by the U.S. Government; in effect, Navorski cannot go home, nor can he enter the United States – hence, Homeland Security Officer Dixon (the marvelous, multi-faceted Stanley Tucci) relegates Navorski to the confines of JFK Terminal, hoping that he will exit “illegally” and become S.E.P. (Somebody Else’s Problem). Innocent Viktor, though, chooses not to exit, thereby remaining Dixon’s responsibility and causing him insufferable agita. While squatting in the Terminal, Viktor’s adventures make us realize just how much more enjoyable it would be to watch paint dry.

Forget plot. Forget realistic human behavior. Forget empathy with the characters. But for a few moments which sparkle with the genius of the mega-powers involved (such as the scene where the camera drives home the hero’s alienation by panning away from him, showing us his insignificance amidst the madding crowd; and the moving “promise fullfilled” to Viktor’s father), THE TERMINAL is a herky-jerky mish-mash of pish-posh. 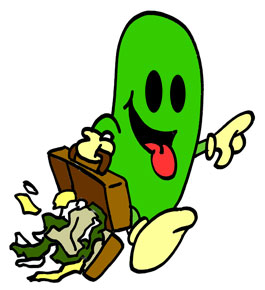 I, like many others on this planet, have seen every one of Steven Spielberg‘s movies (except ALWAYS – n.b. chick-flick!) and I think it’s safe to say that not even in the irritating LOST WORLD: JURASSIC PARK are there so many instances where we, the audience, “fall out” of the movie so painfully.

The “falling out” starts with Dixon’s first meeting with Navorski. One wonders how Dixon squishing a bag of potato chips over Navorski’s jacket will allow Navorski to allegorically comprehend that his country is in political transience. This scene’s deeper message is that government officers like Dixon are so wrapped in their jobs that even a language barrier cannot curb their adherence to protocol. Rest assured, I get it. But inserting that juvenile chip-squishing act removed me from the movie – it was gratuitously Three Stooges and all I could think of were the oil stains that Navorski’s jacket would forever be residued with.

Other sequences also offer deeper messages overlaid with trite screen writing, such as the “medicine-for-goat” sequence (which almost succeeds – until Dixon recites a statute word-for-word for the viewer’s benefit), or the “juggling waiter” scene (performed by old Indian Kumar Pallana, who has just been trying to boost Viktor’s chances with his date – now jeopardizing them with his intrusion). How could the great Spielberg allow so many of these jarring sophomoric idiocies into this movie?

Filmed on a gargantuan movie set which could have stamped out Liberia’s deficit, stranded Viktor realizes he needs to find: a) food, b) shelter, c) something named Wilson to talk to. The movie’s numerous, obtuse sub-plots provide all three.

In one exceptionally inane sub-plot, Viktor intercedes between a shy baggage-handler (Diego Luna) and the INS officer he worships from afar (Zoe Saldana). Whimsical teens clasp their breasts and sigh deeply – but how many stalking baggage-hounds have those whimsical teens dated recently? That Cyrano de Bergerac vamp only goes so far before you have to reveal the Dork Death you really are… That romance led to a contrived marriage, whereupon I “fell out” yet again.

Most prominent of the sub-plots is Viktor’s romance with stewardess Amelia (a pore-less Catherine Zeta-Jones), who carries so much obvious emotional baggage, she should have ‘Samsonite’ tattooed on her forehead. Incessantly nattering about Napoleon, incorrectly deemed “far-sighted” by the desirous Viktor, the fact that he meets this neurotic slattern whilst she is arguing with her adulterous lover about leaving his wife should have raised red flags immediately. (Guess Tom Leykis isn’t broadcast in Krakozhia…) Subsequently, after all the energy Viktor expends on this “romance” – including building Amelia a fountain! – it amounted to a waste of time (when she declines his love for her married adulterer’s) and a wrongful investment of the audience’s emotions. The film lost our Trust.

Viktor and Amelia’s parting scene is also the worst “falling out” example: in a pub, patrons clamor around Viktor, talking to him directly, He ignores them, while Amelia backs away from him. In the real world, if a stranger abjectly pays you no mind, your first instinct is to find others to direct your attention to – but these extras continue blathering at Viktor, the crowd walla progressively getting quieter as the poignancy between Viktor and Amelia grows more intense, thereby dumping us headlong into the film world where extras blather in movies simply to create atmosphere.

In assimilating his English from travelogues, television commercials and baggage-handlers, Viktor becomes far too cognizant of English vernacular; of words and concepts which one could never glean from those lowbrow sources. Thus, communication becomes easy, and the sinister atmosphere pervading Viktor’s alienation is diluted. Oops, I’ve fallen again.

Dixon’s boss commits a grand “fallout” offense when he advises Dixon, “Compassion – that’s the foundation of this country.” I believe he was referring to the pilgrims compassionately liberating the land from the Native Americans. Or was he speaking of the land-owners who compassionately bull-whipped their African slaves? Maybe he meant the Union and Confederacy compassionately disemboweling one another during the American Civil War?…