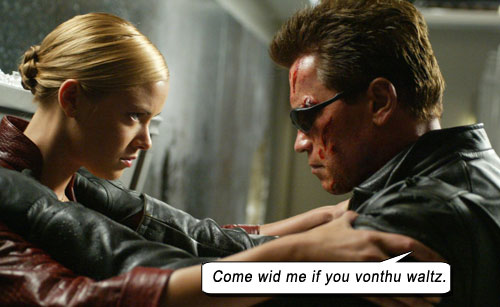 James Cameron had nothing to do with this film. The End.

TERMINATOR 3: RISE OF THE MACHINES stars Ah-nuld in his third appearance as the Terminator, his first role since his heart attack and last role before Governor of California.

It also stars some hot chick as Robert Patrick trying to kill some guy who’s meant to be Edward Furlong, while palling around with that terrorist chick from HOMELAND.

Kristanna Loken is the new malign TX Terminator (who arrives in a time-bubble Disney-naked, which means her hair covers her nipples which would destroy the world if they were seen oh god on high), much more powerful than the old Arnold-model, with electric steel morphabilities and smooth munchable titabilities, sent to kill John Connor (Nick Stahl, looking eternally dazed that he got this role) who is on the run with his future hookup Claire Danes, who screams a lot. And Terminator Arnold Schwarzenegger fulfills his promise by Being Back (who arrives naked in his time-bubble having worked out to achieve the same shape he pumped back in TERMINATOR 2!), as the loving fluffy Terminator who helps them. “Are you Chon Connor?” (If a Terminator is helping you LIVE, technically, should it even be called a “terminator”?)

Chase sequences ensue, massive, thrilling, original… but they’re still just chase sequences. After the exposition of how the four characters interlock, it is all running in lieu of excitement and shouting in lieu of acting. And setting up Schwarzenegger for incongruous gags: “Talk to the hand,” “She’ll be back!” Callbacks to previous films in the series abound, as do Pretty Orange Explosions. 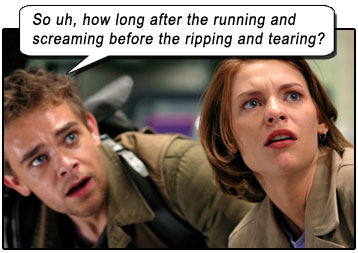 I still can’t figure why Terminators throw people. The first time the TX grabs Claire, instead of grabbing her throat and asking her where John Connor is – it throws her away first, then goes over and asks where John Connor is. At the cemetery, the TX fools Claire by assuming the shape of Claire’s boyfriend, so that Claire runs toward her. Long before Claire gets to her, the TX morphs back into her lesbian self. Have you any idea of tactics at all, drain-brain! She might be able to change into any electrical appliance, but she retains the intelligence of a toaster.

Connor’s goal is to stop Skynet – the company that makes robots and cybernetic organisms that attain artificial intelligence and overthrow humanity. So the climax is ironic, as the Terminator and the Throwinator engage in expressionless combat – two robots deciding the fate of humans.

Later, when the TX “corrupts” Arnold’s system, Arnold goes after Chon Connor to kill him. So he grabs Chon – and throws him…

Written by John D. Brancato and Michael Ferris (THE NET), with a few good story turns and a satisfactory ending that is just the beginning, and directed by Jonathan Mostow (U-571) like he’s bursting to go to the toilet.