That’s the best description *I* can think of for TERMINATOR SALVATION. What more could we expect from writers who penned the silly TERMINATOR 3: RISE OF THE MACHINES and a director whose claim to fame is the CHARLIE’S ANGELS franchise? James Cameron would be turning in his grave if he didn’t just resurrect himself with AVATAR. 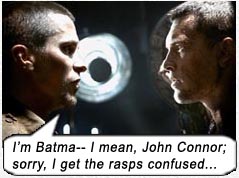 A story about Heart that lacks it completely.

It is 2018. John Connor (Christian Bale) is leader of “The Resistance” against The Machines who have assumed intelligence and are trying to wipe out humankind by shooting at them one at a time. Will someone remind the machines that being such an integral part of humankind’s existence, all they have to do to bring humankind to its knees is to stop working – and mollycoddled humankind will start crying like little girls without dollies.

Those unfamiliar with TERMINATOR canon can apparently go suck an egg, as there are so many winks at 1984’s TERMINATOR and 1991’s TERMINATOR 2: JUDGMENT DAY, newbies should expect to be crushed under heavy metal in-gags:

“Come with me if you want to live”; Guns ‘N Roses’ You Could Be Mine; battles on catwalks, boiling metal, liquid nitrogen, “There is no fate but what we make,” and of course, “I’ll be back” (delivered by Connor at a nondescript juncture)…

I know why Bale is so pissed off: Sam Worthington got the best role – as machinesexy Marcus, a cyborg programmed to think he’s human, who infiltrates and unknowingly draws out Connor for destruction. Bale is a brilliant actor, a chameleon, an artisan; Sam Worthington is a block of sexy wood – and so, like the original films, the coolest role went to the guy who could act the LEAST.

Helena Bonham Carter explains the Manchurian Situation via a Marlon Jor-El Brando holo-exposition – coincidentally, like a Batman Villain – that no one asked for and would have served her purpose better to have not explained. 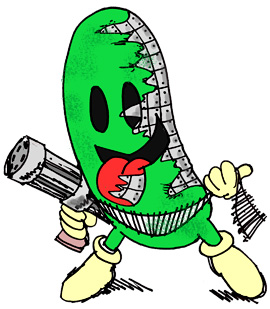 So have they invented time-travel yet? Didn’t machines send the Governor back first, forcing John Connor to send Kyle back to stop him? Which would mean MACHINES created time travel. Thanks, Diebold! Humans couldn’t find the time to invent it, not with all that hiding and skulking in portable underground labs covered in poo.Trying to tie it all in with canon, Connor narrates at the end that “the war is just beginning,” meaning that war Kyle Reese rasps about in THE TERMINATOR, even though the Schwarzenegger Terminator was like a toy soldier compared to the techno design of the Worthingtonator, which was so technologically covert it didn’t even know it was a Manchurian Candidator. And like George Lucas’s prequel-abominations-with-better-effects, the paradoxes and anomalous plotting of writers John Brancato and Michael Ferris comes back ’round to bite them in the assinator.

The irony of SALVATION is that it is continually yammering about “strong hearts” delineating humans from machines and “what it means to be human” and all manner of poignant story element so obviously cribbed from Screenwriting For Dummies – and lacks everything it yammers about.

Bale brings his Batman rasp and boundless temper; Bryce Dallas Howard brings her three unnecessary names and a spunky red coiffure; looking like Billy Bibbit from CUCKOO’S NEST, Anton Yelchin is young Kyle Reese (in one of those many nods to TERMINATOR fans that means nothing to first-time viewers); Moon Bloodgood brings a sexy disposition for metal man meat; Michael Ironside is Bad Guy emeritus; Helena Bonham Carter goes name to name with Bryce Dallas Howard but beats out Howard on looking like a bloodless horse junkie (i.e. like Helena Bonham Carter); and a bodybuilt guy with a face like an Arnold tips another hat to the fanboys.

The production values are as scorching as Bale’s temper. There is an amazing unbroken tracking shot 360 degrees around a helicopter in distress, that then tracks INTO the helicopter (John Connor piloting) and stays with the action as the helicopter crashes and lands upside down. John Connor crawls from the wreck and sees a mushroom cloud in the distance, blasted radar dishes littering the foreground and middle background. We know this is all green screen, yet it takes us right into the murderous battle heat of Termytown. Then it gets stupid immediately – as a skeletal Terminator grabs John Connor and throws him. Let me get this straight: this steel-belted Terminator’s one directive is to terminate humans, yet having the opportunity to simply clasp its mighty metal claw around Connor’s neck from behind and asphyxiate him or snap his neck, it opts to grab him by the shoulder and throw him?

And so it goes with every Terminator: they grab Kyle or Connor or Marcus and instead of simply crushing them – again with the throwing! Or shooting without aiming. (You’d think they’d have some kind of inbuilt aiming mechanism, but apparently Terminators were built by the same useless techs who made the battle droids for The Empire.)

Which proves that McG (the McDirector) has a great grasp of constructing action scenes – but don’t let him near your story. Unless you’re two bitches who wrote TERMINATOR 3. See how it all comes around and bites us in the ass?