Rise of the Machine (i.e. Arnold). 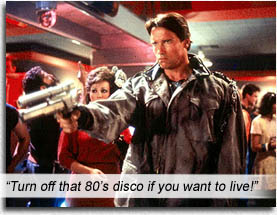 Arnold Schwarzenegger as a killing machine with no emotions, big guns belching, outlandish feats of body strength, delivering his lines in a sinister, robotic monotone – hang on, that could be any of his movies.But this movie made him what he is today. What, the Governor of California?…

When THE TERMINATOR was released in 1984, Schwarzenegger was already a superstar – 7 Mr. Olympia titles, five-time Mr. Universe, with the CONAN franchise under his belt – this movie made him a million-dollar megastar, a household name, an archetype for stunted elocution.

In this James Cameron actioner, Schwarzenegger is the eponymous Terminator, a cyborg from the future (2029), sent back in time by the machines to 1984 Los Angeles, to “terminate” Sarah Connor (big-haired, man-faced Linda Hamilton), who will be the mother of John Connor, the man who would lead the human resistance against the machines when they have taken over society in 2029.

The humans of the future have also sent someone back through time – Kyle Reese (Michael Biehn) – to stop the Terminator, save Sarah Connor, and find a decent pair of pants.

Excellent concept. One major flaw. No, not that Sarah Connor lives in the painful New Wave 1980s with her brainless, bighair girlfriend, not that the Terminator has no eyebrows, not even that lame Brad Fiedel soundtrack that sounds like Oingo without the Boingo. The flaw is in the time-paradox (as usual, with most, if not all, time-travel stories) created simply by sending the Terminator back through time in the first place. Yet writer-director Cameron artfully dodges any explanation of it by keeping the action brain-dead high.

And how effective was John Connor’s resistance anyway? From Reese’s apocalyptic flashbacks, human extermination seems to be going quite well for the machines, with Reese and his pals living like rats in sewers. But it seems the machines were really trembling in their little metal panties, feeling threatened enough to go to all the trouble of inventing time travel to send someone back to kill Connor’s mother. That’s a whole lotta scared!

And has anyone stopped to consider that in 2029, they have Time Machines?! – that actually work!! So why didn’t humans send someone back even further in time to pull the plug on the machines taking over in the first place? These anomalies are explained feverishly by Reese to policemen Paul Winfield and Lance Henriksen. But nobody’s buying it. Especially not the fey police psychiatrist who looks like he took time off from molesting children to question Reese.

Reese came through the time portal naked – as did the Terminator. The Terminator wrenches his clothes from a group of punks (watch for Bill Paxton as the blue-haired punk), and Reese steals his pants from a bum. They both must stink like a Japanese fish market!

Terminator and Reese both track Sarah Connor to an embarrassing dance club called Tech Noir, spewing the lamest disco possible to represent – ironically – its hipness, the female vocals seemingly stuck on the lyric, “You’ve got me burnin’!,” pony-stepping whitebread patrons looking like honky refugees from a Pat Benatar video.

After the shooting starts, Reese utters one of Terminator-dom’s magic lines to Sarah, “Come with me if you want to live!”

This is also the movie where Schwarzenegger coins, “I’ll be back!” In this perfect role for someone with no command of the English language, of his seventeen lines of dialogue, these three words would become Arnold’s catchcry forever. And, though uttered with the most ominous portent, they have also become the most funn-nnee.

And he does come back – again and again, in mighty action sequences where he is gunned down, run over, exploded, yet relentlessly recovering and pursuing Sarah, unstoppable, Reese forever warding off the attacks. Reese tells Sarah: “…it doesn’t feel pity or remorse or fear” (he’s right – seen PUMPING IRON?) “It absolutely will not stop until you are dead.”

This bludgeoning simplicity makes THE TERMINATOR the chase-movie classic it is. To add even more to its pedigree, Harlan Ellison (god of literary fantasists) sued Cameron for plagiarizing ideas from his OUTER LIMITS episodes “Soldier” and “Demon with a Glass Hand.” Later editions of the movie would feature credits acknowledging Ellison’s work.

While they hide out in a roach motel, Reese puts his future-moves on Sarah, calling her a Legend and strong and brave and anything else guaranteed to moisten her man-jeans. And a pick-up line almost as good as the HIGHLANDER‘s move of stabbing himself to bed Roxanne Hart: Reese gravel-whispers, “I’ve memorized every line on your face. I came across time for you, Sarah. I love you. I always have.” Cue porn music, nakedness, future sperm… and Linda Hamilton getting her banana teats out for The ’80s Love Scene, while looking like a man who’s having a hard time turning a socket wrench. The thought surely must have crossed Reese’s mind as he saw them bananas, “Boy, Legends are easy. Keeping it hard with this man-face is hard.”

And then Cameron makes an excellent character move – something which no one would dream of making in later Arnold movies after his star had risen to major box-office draw – he terminates Arnold! The flesh is seared off the Terminator in the last act and we see only the steel machine-man endoskeleton (created by legendary Stan Winston) pursue Sarah. This plot development, though robbing Arnold of screentime, drove home the Terminator’s relentlessness; how it would literally stop at nothing, not even its flesh coming off, to complete its deadly mission. These are some of the most terrifying sequences of this modern technological horror tale, clinical, un-human; as Reese’s warnings come to metal stop-motion fruition: “…It can’t be bargained with, can’t be reasoned with…”

The dicey closeups of Arnold’s prosthetic head nearly land this movie in the B-Movie crap heap, though – but we forgive Cameron and Winston; best anyone could do pre-CGI, without selling their soul to George Lucas.

And has anyone considered that the Terminator’s mission may have actually been the touchstone that set off the war between the machines and humans? Like incarcerating people at Guantanamo – if they weren’t terrorists before, well… If humans were not suspicious and hateful of machines before, you can bet your TiVo they are now!

Though the Terminator failed in its mission – leaving the future of mankind in the hands of a big-haired, man-faced eighties chick – with the box office grosses nearly hitting the movie’s filming budget on its opening weekend, we can be sure of at least one thing: