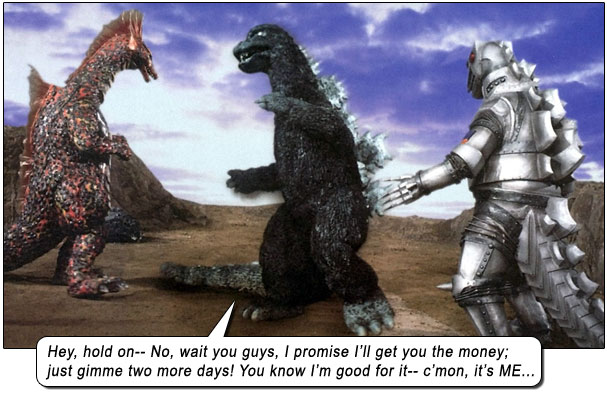 The Tyranny of Evil Men…

Mechagodzilla is re-forged by aliens, and Titanosaurus is mind-ruled by scientists, sent to kill Godzilla, who is ass-raped by moviemakers.

Opening montage: oh shit! – the American version – we can tell immediately: an American narrator pisses his pants trying to sound cogent during a Boolshit Maximus montage that he is clearly making up as he goes along. Overdosing on stock footage, we see the puppy-dog-poo versions of Godzilla battle monsters pointlessly, in the end, sinking Mechagodzilla.

We can only presume that TERROR OF MECHAGODZILLA is a product of studio decree, because no sane person could possibly be responsible for crap this high: Toho Company would have forced Godzilla veteran Ishiro Honda (director of 1954’s original) to play Good Company Boy and Direct Or Die; they would have greenlighted Yukiko Takayama’s script only when it approached nowhere near intelligence; and they would have fought to keep those production dollars down – for the love of Shinto and the good of their own pockets. Then the Americans finished the hatchet job, “translating” not what the actors are saying, but whatever fitted their pseudo-idiot story, and then dubbing United Kingdom accents without any thought to syntax, thereby driving this stinker right into one of their gaping bungholes.

Aliens from Planet X are back! Bwohahahaa! They’ve swapped their disco uniforms for silver LOST IN SPACE duds, and enlisted the aid of bitter Dr. Mafune (Akihiko Hirata in heavy makeup, a Godz veteran, including playing Dr. Serizawa in the 1954 original! A man’s gotta eat, I guess) to help them defeat Earth, because Mafune mind-controls a Titanosaurus, which they can use alongside their resurrected Mechagodzilla.

Mafune can’t quite mind-control his strong-willed daughter (Tomoko Ai), who falls in love with another Godz veteran, Katsuhiko Sasaki (the inventor in GODZILLA VS. MEGALON).

Music by Akira Ifukube (composer on 1954’s original), his odd-time Godz theme seeming completely incongruous in the context of this curry festival.

Again, it’s not the guys in the suits that are the problem – we will gladly suspend our disbelief and willingly embrace the campy fun, if the filmmakers would just display consistency within their own film universe. Instead, so little thought is given to plot and acting, with such painful English dubbing, that all we take away in the end are guys in rubber suits fighting in a movie that makes no sense. 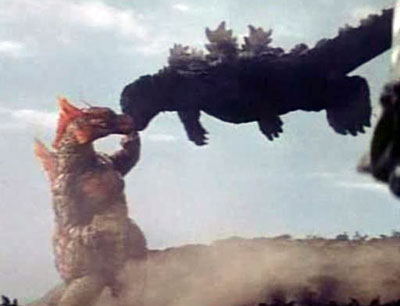 Let’s CAMP here for the night.

Example? Let’s not even mention the scene where Titanosaurus (is it any surprise that the filmmakers were unaware there is really a dinosaur of this name?) grips Godzilla’s mouth and lifts him up parallel to the ground – that’s just laugh-out-loud gravy. Let’s not even mention the prisoner who escapes and is shot in a slomo death – a nonsense scene only created so that the prisoner can hand a McGuffin to a plumber – a plumber working nonchalantly in this top secret alien-guarded area. However, let’s do mention: Mecha uses his finger-missiles to dispatch Godzilla. Just one missile is enough to send Godz over into a shallow grave. Oouwaah! Five minutes later, Godzilla, who we surmise needed the rest, smashes out of the grave – dare you doubt? Now Mecha throws everything he’s got at Godz – finger-missiles, chest ray, eye ray – nothing works. Why? How? Does anyone care?

The aliens, who guffaw after every statement, congratulate themselves on Mecha: “He is the perfect robot monster! Bwohahahaa!” Why you calling it a “monster” you dingleberries? It’s a ROBOT!

The girl love interest kills herself in the arms of her lover, in the lab. Next we see: Lover is carrying dead Girl in his arms at the top of a cliff, watching the monster fight. Sun at his back. So cinematic! Hey buddy, did you just carry this girl to the top of a cliff instead of getting paramedics to retrieve her body from the lab where she died? What’s the matter with you?!

Now, I’m tryin’, Ringo. I’m tryin’ real hard to find the themes or moral layers or subtle messages, but that ain’t the truth. The truth is, Ringo: I’m the righteous man, and Toho – is the tyranny that creates evil men…