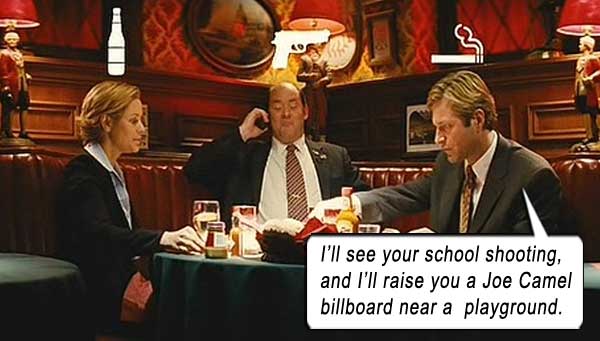 Aaron Eckhart has always deserved to play a role as ferociously incisive as this. THANK YOU FOR SMOKING fleshes his latent silver-tongued devil in the form of Nick Naylor, a spokesman for Big Tobacco; the type of guy who could sell ice to Eskimos in winter. 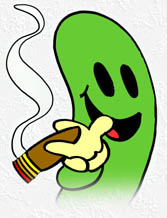 Movie opens with Nick on one of those daytime talk shows responsible for the redneckification of America, guesting alongside lobbyists against the tobacco industry and – purely as emotive stab against tobacco – Cancer Boy. (As hilariously direct as this epithet is – correct me if I’m wrong – wasn’t Cancer Boy, as a proper noun, invented by The Kids in the Hall?) Using his gifted gab, Nick skillfully turns the audience aggression aimed at Big Tobacco against the anti-smoking lobbyists, using the head-shaved, irradiated Cancer Boy as prime example of Tobacco’s good intent, “Though these lobbyists would like to see Cancer Boy die to prove their point, it is in Tobacco’s best interests that he LIVES, to continue using our product.”

Later, giving a speech at his son’s school, he tears a new hole for a ten-year-old girl when she offers her mother’s opinion that smoking is unhealthy, “Oh, is your mommy a doctor?”

From Christopher Buckley’s novel, directing and writing his first feature film, Jason Reitman (son of Ghostbuster Ivan) creates a character we rarely see in Hollywood movies: a hero quite aware of, and at peace with, his moral flexibility.

Zealously embracing his job as Sultan of Spin, Nick is a mixture of forest fire (machine-gunning his dialog in short, sharp bursts, savagely taking down all comers), and innocence (Eckhart retaining that disarming demeanor he displayed in YOUR FRIENDS AND NEIGHBORS, 1998). We “don’t see him coming” – unlike the Cruise of MAGNOLIA or the Martin of LEAP OF FAITH – slamming home runs with every fallacious, roundabout rebuttal.

Robert Duvall is the industry’s Puff Daddy – some mighty level of Big Tobacco CEO; William H. Macy now officially owns the character he plays here – Senator Ortolan Finistirre, yet another perplexed dexter, trying not to stumble under the pressure of Nick’s smooth operator; Sam Elliott could not be better cast as an ex-Marlboro Man (we cannot even imagine sullying his deep-voiced masculinity with BROKEBACK sniggers), and J.K. Simmons has been honing this gruff boss routine since SPIDER-MAN.

Nick’s lunchtime buddies, lobbyists for alcohol (Maria Bello) and guns (David Koechner), who take a perverse pleasure in terming themselves the MOD Squad (“Merchants Of Death”), bond over wicked lobbying anecdotes and their respective industry’s death tolls. Bello would have indisputably made a more ravishing and convincing underhanded reporter than Holmes. (I’m not advocating they swap roles. I’m advocating that Holmes should find employment more suited to her unique talents – maybe a toilet cleaner at Wal-Mart.)

The thin plot finds Nick commissioning a super-agent (Rob Lowe, a biting composite of Hollywood Cliché, from his smarmy assistant to his kimono) to get cigarettes back into the lips of A-List stars in A-List movies – like smoking’s glory days with Bogey and Bacall; when men were men and women were not she-males.

This simple story only exists to give Nick something to do while the movie studies his incorrigible character. His suave amorality is tempered when dealing with son Joey (Cameron Bright). To be a good part-time father, Nick must use his rationalization skills to educate Joey about a world unable to see its own contradictions.

To prime Joey for a school debate, Nick espouses: “If you argue correctly, you’re never wrong” – which, being true, is an indictment not just against lobbyists (on any side) and their unholy string-pulling in congress, but also against the current legal system, the entertainment industry and any forum where the slickest LIE will triumph over a mundane Truth. 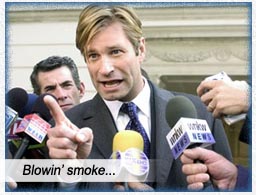 Deeper than the father-son relationship, the movie’s ultimate purpose:  a quick-witted satire on how Spin has crept into every aspect of our modern lives. Smoking lobbyists are the subject here but their deceitful nature has only been nurtured by society itself: fat chicks call themselves “thick”; we tell prospective buyers that our car with the massive oil leak “runs well”; 19 months into a stalemated war, a Mission Accomplished sign flies high at a Presidential address; and a drug which causes irregular heartbeat, dizziness, high blood pressure, nausea, diarrhea, impotence, dry mouth, headaches and blurred vision is marketed as an “Anti-Depressant”… to make you more sociable! (Either way you end up staying home – from imagined anxiety, or real anxiety that you may crap your pants and have a heart attack while trying to get it up. More dangerous than heroin, they call it Zoloft.)

In a plot development which would have sent most screenwriters squealing for their generic PG-13 character arcs, Nick is kidnapped by anti-smoking fanatics, forced to overdose on nicotine patches and, in a tableau reminiscent of Michelangelo’s Pietà, left to die in the lap of Daniel French’s Lincoln statue. The imagery is portentous because Nick effects a resurrection of sorts: his tolerance to nicotine, through smoking, kept him alive – and is woven into the fabric of his spin thereafter: “Smoking saved my life!”

In a refreshing denouement, Nick experiences no epiphanies on morality or political correctness. When he wins a showdown with Senator Finisterre, he refuses an offer of his old job back – not because he has recanted on his stance, but because he refuses to sell his exemplary services back to the company that fired him. Movie ends with Nick continuing as a devilish apologist for maligned causes, taking his talents and amorality elsewhere.

THANK YOU FOR SMOKING is a biting rejoinder to all things politically correct. It reminds us to educate ourselves in the face of staggering obstacles. And it illustrates that the obstacles to truth are sometimes the very people exhorting you to seek it.

Someone had the audacity to label their anti-smoking campaign “truth” and no one questioned this lie. I am not even a smoker, yet I find those insufferable neo-hippies an insult and abomination to humanity; themselves, spin doctors of the highest order. Everyone knows smoking is harmful to your health – even Nick Naylor admits this – so placing ever more warnings in the public eye is simply “busywork”; given the choice, those who choose to smoke – will smoke. As those who choose to pig on chocolate, McDonalds or Zoloft will do so no matter how many times their shit turns green.

If the movie is sending a message about Choice, isn’t it intriguing that no one is actually seen smoking in the movie? Even the mighty John Wayne (seen in a snippet from SANDS OF IWO JIMA, 1949) is shot down as he prepares to light up. Relating back to this film’s plot – getting an A-List Hero to smoke onscreen – was this non-smoking decision true irony on the film-makers’ part, or simply the MPAA enforcing their non-smoking edicts on this major release film, making it a victim of the very condition it rails against?

Put that in your pipe and smoke it!