I’m Too Sexy For My Therapy.

Sex addiction – is that even a thing? Isn’t that something that guys just say as an excuse when they get caught cheating?
— Gwyneth Paltrow, THANKS FOR SHARING.

A man is only as faithful as his options.
— Anonymous (or Chris Rock, or Gene Simmons)

SHAME meets FLIGHT in this glossy Hollywood Fantasy about sex addiction. THANKS FOR SHARING is brave for covering this rarely explored topic, and simultaneously gutless for plotting every Model’s arc so neatly and manageably. Hey, this sex addict stuff looks like good clean fun! Thank you so bloody much, Gutless MPAA! 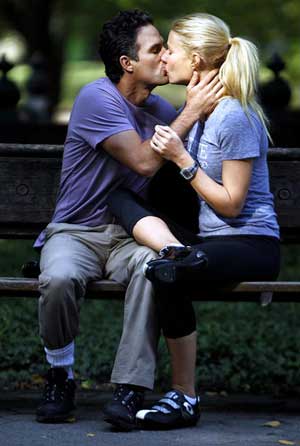 Mark Ruffalo tries to cure Gwyneth Paltrow
of the addiction of kneeing men in the sternum
every time she is kissed.

THANKS FOR SHARING is about a specific group of people who think about sex too much, who feel their excessive sexuality is causing problems in their relationships, and whose lives are ruled by their sexual impulses, in other words – EVERYONE. The group featured in this movie, though, would like the privilege of being considered more lustful than the rest of us sexual cucumbers and declare themselves “sex addicts”; with the audacity and ignorance to declare themselves “diseased.” (They model themselves after Alcoholics Anonymous in more ways than one.) To garner, I dunno, respectability? nobility? pity? free drugs?…

Movie follows three men and the tensions that their “addiction” brings to their relationships: Mike (Tim Robbins, patriarchal, domineering), Adam (Mark Ruffalo, tentatively embarking on a new relationship) and Neil (Josh Gad, sad clown, whose performance soars miles above his one-note doofus in THE ROCKER).

Mike is married to his high school sweetheart (Joely Richardson), unsympathetic to his ex-junkie son (Patrick Fugit, in a mature underplaying role). Adam tentatively starts dating Phoebe (Gwyneth Paltrow), but finds he has grown too fond of illicit, dirty sex to bond in a mature relationship (whatever that means). Neil, a doctor, doesn’t take the sex addict group seriously until he loses his job at the hospital due to peeking up skirts; he finds an ally in Dede (rock singer Pink aka Alecia Moore), also an addict.

Now I don’t want to seem insensitive to people who are truly affected adversely by sexuality in their social interactions, jobs, or quality of life (in other words – EVERYONE) because I’m sure a contingent of actual “addicts” does exist in the world; there’s a technical term for them – men. But this movie presents such well-adjusted, simplistic characters, the filmmakers are hardly making any kind of statement about people who might actually need help for sordid, painful, anti-social sexuality. Which, according to this movie, is EVERYONE.

Because if walking down the street and looking at billboards of bikini-clad women and glancing askew at smooth-legged women with vagina-high dresses is wrong, then I don’t wanna be right. But apparently that’s sick and perverted and extreme. (Or at least, it’s portrayed as affecting our protagonists in a bad way.) I could really get off on a rant here (oooh, don’t say ‘get off’!) about sexually-charged society being so charged because we are sexual beings, successful at our genetic duty of producing more offspring than required, so that more will live than die (when a species reaches that stage of development, it is “successful”). But it’s too exhausting explaining evolutionary theory to a cult so dead set against it.

The performances in this movie are exceptional, so I’m not railing against the art of these actors or the dexterity in the filmmaking (director, co-writer Stuart Blumberg and writer Matt Winston). But I’m betting that Blumberg, Winston, or both are S.A. culties. And it’s outrageous that people like this actually exist, trying to stultify their own DNA. A group leader informs, “Sobriety [note how they use the same terms as AA] includes freedom from masturbation and sex outside of a committed relationship.” You do realize that sperm constantly builds up in testicles, right? You do realize sex outside of “committed relationships” has been occurring since primitive hominids walked upright? Are you people insane or just stupid? You can’t subvert biology no matter how much you deny it. Mike admits the difficulty of their predicament, “It’s like trying to quit crack while the pipe is attached to your body.” Close. How about, “It’s like trying to quit breathing.” You’re denying an autonomous bodily function. The KIDS IN THE HALL sketch, “Urination Support Group,” satires it perfectly, “We’re not going to be tyrannized by our bladders!”

Pink is in the room, relating her sexual promiscuities, and of course every guy in the room is thinking of fucking her. Am I lying? Kick me out of the group if I’m making this shit up!

Vote me off the island if I’m telling untruths.

Here’s the other thing about addicts: they think their way is the only way. Mike disparages, infantilizes and distrusts his son (Fugit) for not joining a group to get clean, opting to “white-knuckle” it. “Some people don’t need a group to lean on, dad. Some people can do it on their own.” He’s right. Unfortunately the “addicts” WILL – NOT – LET you do it any other way. Adam tells Neil, “You have to believe in a higher power to get you through this.” When Neil admits, “I’m kinda an atheist–” Adam walks away, dismissing him outright, until Neil must relent, “I’m willing to try anything.” Oh, that’s nice – extorted into belief in Christ. There’s a word for that – Christianity.

But don’t worry, everything works out fine for everyone in the end. And the sordid, painful, anti-social fates that real sex addicts experience? Well, let’s leave that for a European production…

If only they would approach it this way: any addiction isolates you from the closest people you relate to – your family and friends. Seeking support, some people end up in a “support group,” which is just a substitute for your friends, whom you’ve grown apart from due to your addiction. That’s all you need – the support of a new group of friends, who are sharing the same “addiction” experience with you. Ironically, support groups isolate themselves from “normal” society by getting caught up in “god” and “12 steps” and “disease” and other culty elements and formalities that have nothing to do with kicking any addiction. That’s what makes them so annoying and irrelevant.

Only in First World countries is “sex addiction” even considered a “thing.” Like religion, just because ten million seemingly sane people subscribe to it, doesn’t make it real. If you’ve got the ability to procreate (i.e. shoot your sperm into a functioning uterus, or accept sperm into your functioning uterus) then you’re OK by your genes, which are just looking for continuance on this vicious planet where every organism competes for the commodity of life. You’re not sick, you’re not diseased, you’re not perverted. You possess Life (and the ability to replicate it) and that’s all that matters. Wanting more of that process that creates Life (what some might call “sex addiction”) can never be considered a bad thing from a genetic point of view, which is the big picture that counts. The thing that would guarantee wiping out the human species would be a lack of desire to procreate.

Dare you try to subvert His Holy Word? Even your vaunted “higher power” gave you the go-ahead to Go Forth And Multiply.

In other words, Get Fucked.