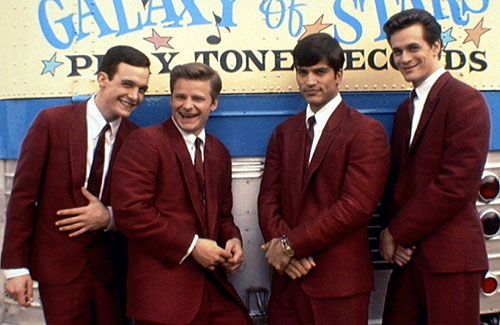 Those scruffy longhairs are in town! Lock up your daughters!

That Thing Done Well is a Thing of Beauty Indeed.

Snappy and exhilarating, THAT THING YOU DO! focuses on the rise and fall of a one-hit wonder pop group ensconced in British Invasion-era America. Full credit to writer-director Tom Hanks for crafting an entertaining vehicle in which he stars, that he is not the star of – instead making the music, the heady innocence of the era the star. 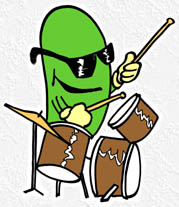 After a few live appearances and an indie single, The Wonders “make it” (see how easy it is, starving musicians?). In turning them over to Play Tone, a major record label, The Wonders’ first Garage Days manager, Phil (Chris Ellis), portrays a simplistic, “noble” approach – “My bird-doggin’ is done; Play Tone’s gonna take care of ya” – failing to mention that major label interest must have involved buying The Wonders’ contract from Phil for a price he couldn’t refuse. When Guy expresses how easy it seems, the label rep Mr. White (a high-foreheaded Hanks) smoothly purrs, “Well, papers will have to be signed and you’ll have to get me the master tapes…” Suddenly Reality is served – you could almost see the horns growing out of White’s high forehead.

Hanks doesn’t serve up too much of this meat, and by concentrating on the end-result of all the bureaucracy and hard work – the gigs – we are given a skewed view of this rock and roll “job.” Seems like it’s all just fun, but there are as many rockers who attest that they “hate their job,” as there are desk-jockeys nine-to-fiving. When it’s your primary income, it’s your Job – simple. And any job done well will elicit fun. Any job where you cannot cope, becomes not fun.

THAT THING YOU DO! dabbles very uneasily in the business end of the music business: Chris Isaak (as Guy’s uncle) records their single, That Thing You Do, in a church in one take, Phil gets it on the radio within one week, and while they’re on tour, Mr. White signs them and suddenly the record is howlin’ up the Billboard charts. How? Scene Missing. Hanks drops clues, but the dots are never joined – which might be construed as treating an audience as “intelligent” – whoa!, let’s not go overboard…

The band guys are perceived as financially “well-off” by movie’s end, but a debut artist selling one single – even to Number One – cannot possibly recoup any of the money that the record label advanced to duplicate, promote and distribute the single nationally. As most veteran artists will attest, they had to wait for their fourth or fifth album (not single) to put them in the black fiscally. And The Wonders ultimately reneged on their contract, which meant that any advances assigned as living expenses on tour would suddenly dry up. It’s an intimidating, debilitating legal situation that ensues – but the film sidestepped all this in favor of cute guys, boppy songs and matching suits. 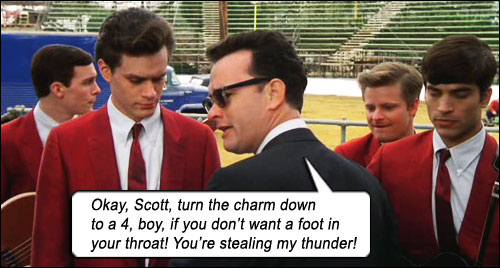 The crowning glory of this movie is undoubtedly its synchronized soundtrack. Very few movies (including monumental, award-winning productions like AMADEUS or IMMORTAL BELOVED) pay this much attention to ensuring that musician’s manipulations on screen match the audio soundtrack, except maybe (THIS IS) SPINAL TAP. (Of course, movies about real musical artists don’t enter this assessment: WOODSTOCK, GIMME SHELTER, THE SONG REMAINS THE SAME, etc. – although the Zep movie has its mighty share of non-sync passages.)

When the EDDIE & THE CRUISERS movies surged into cinemas in the 80s, I was humiliated at the lack of savvy the filmmakers exhibited in their portrayal of the rock and roll milieu. A major musical flaw was the set-and-forget production value for all the songs, making them sound exactly the same, as if they were all recorded in one place at one time, with one overall mix – which is what was actually done, of course – but to bring some credibility to the movie, the producers should have assessed the circumstances for each scene and mixed the music accordingly – which is what Hanks and his audio personnel intuitively did for this movie.

Every single time The Wonders perform their eponymous hit, the sound is mixed to reflect the type of stadium, bar or studio they are in; every single onscreen frame of the actors-playing-musicians is synched – Hanks specifically made his principals take instrument lessons before filming began – down to every single beat of drum-fill on screen being accounted for, down to the guitarists changing to correct chords in correct positions in sync with the audio! If Hanks was brave enough to cast Liv Tyler (daughter of Rock Royalty, Steven Tyler of Aerosmith), he must have had heady confidence in his team of editors and sound engineers, for to fail at putting across the “musicality” of this movie (with Steven’s progeny willing to be involved in it) would not allow Hanks to show his face in public ever again.

Of course there are minute flaws, but none worth mentioning here. There are too many trinkets to keep one sated: Guy’s fastidious father (Holmes Osbourne), Jimmy’s fascination with punning the band’s name (spelled initially as “One-Ders” and subsequently mispronounced “Oh-NEE-ders” continuously), the well-drawn band personalities (the “talented one,” “smart one,” “quiet one,” “zany one”), cameos from Peter Scolari (Hanks’s old Bosom Buddy), Rita Wilson, Alex Rocco (Moe Green in THE GODFATHER), Kevin Pollak; the subtle romance between Guy and Fay, who are not actually an item until the last few frames of film…

…and you’ll never be able to get that damn song out of your head!