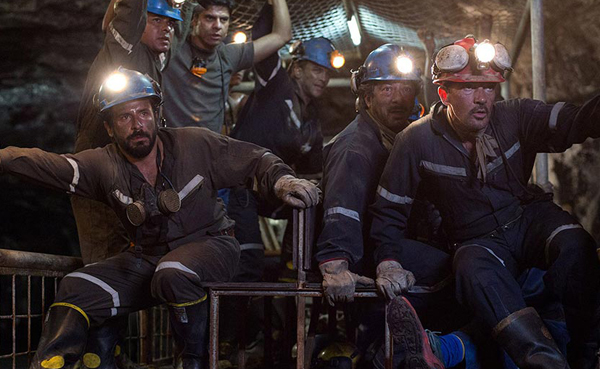 The strippers get ready to rock!

33 men trapped in a mine, arguing over food, water, and who gets to negotiate the book deal.

THE 33, a dramatization of the Chilean mine disaster of 2010, is a dichotomy of empathy and outrage. The pendulum swings hard both ways; firstly at the outrage of a mining corporation that would think so little of its most precious assets – its human workers – that it would not even erect ladders all the way to the surface from the supposed “safe room”; a company that let its mine reach a state of disrepair well past its supposed warning signs (mirrors mounted in the cracks of the stone, to alert workers of the mountain moving – by the time of the cave-in, all the mirrors were known to be broken for a long period); a company that usually just left trapped men to die, to save on resources…

Then we swing the other way: outrage at the movie itself. THE 33 opens with beautiful, sweeping shots of virgin lands in Chile and Colombia – basically, celebrating the “environment” (you know, that thing it’s politically correct to exalt) – and the flying camera eventually settles on… a mining operation. Wait–what? You mean one of those corporate monsters RAPING the land? What is director Patricia Riggen trying to say? That we need to rape the environment to continue living in luxury? (Oh, I guess we selfish humans can get behind that if we still want our cellphones and computers…) An unintentionally jarring start to a movie that will continue to jar us for all the wrong reasons…

We are in the Atacama Desert in Chile, at a family party populated by South American people. All speaking English. In a Spanish accent. Even before my head can explode trying to gauge the level of disrespect in not allowing these people to speak their own language and use subtitles, suddenly – Juliette Binoche! How powerful was her casting agency to land this role, or, more directly, who did they make this French woman scrotum-fondle to pretend to be Mexican? Speaking English, of course – in a Spanish accent. I really need to trap these filmmakers in a mine disaster.

Antonia Banderas as flamboyant nominal group leader Mario Sepulveda, and Lou Diamond Phillips as foreman Don Lucho are two characters who seem perfectly cast, yet even they speak English in whatever Spanish accent they feel like. Lucho mentions the cracked mirrors to the company boss, who ignores him.

As they drive into the mine opening, the men make the Sign of the Cross to a small statue of Virgin Mary and Baby Jesus guarding the entrance. I guess she kept them safe… I guess she had the power to SAVE them but not enough power to stop the mine from collapsing in the first place? Uhhh…

The mine itself is not a claustrophobic tunnel, or shaft – it’s a gigantic cavern, with multi-levels, with space for many trucks and cranes. Since there is a new guy on the team, the veteran miners get to explain all the areas of the mine for us surface-dwellers – the Machine Shop, the Refuge, the Sweaty Male Bonding Room, the Cinematic Montage Room, etc. We are now 2,300 feet underground. On August 5, 2010. And it’s time to trap some bitches.

Rumbling, tumbling down. During the collapse, we see many men running and screaming. It is not made clear how many are actually down there in these multi-levels. I guess (?) just these 33 guys. Anyway, after showing us this capacious operation, and then the confusion and mayhem of the collapse, I don’t understand how these men accumulated all in one area, with none lost under falling rocks. And some avaricious movie executive watched these men suffocate slowly, while on the phone to Antonio Banderas’s agent to fast-track a movie deal to exploit them no matter the outcome. You KNOW I’m right.

The families gather outside the site, screaming for rescue, the news vultures circle, the company men rhubarb. Everyone speaking English in a Spanish accent. Only one newscaster speaks Spanish with subtitles. Huh? Who let this racist thug through the line? Personal stories capture the imagination of the public – like the guy whose wife and mistress turn up… 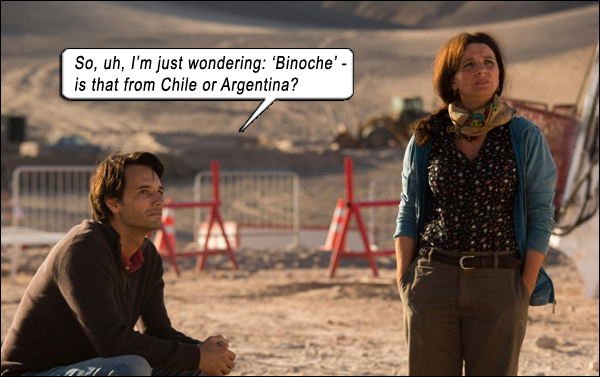 Rodrigo Santoro is government guy Laurence Golborne, sent to clean up the mess, either by rescuing the men or providing a good public explanation on why not. That’s why he’s so handsome. The foreman tells Laurence, “I’ve seen 5 collapses in 25 years. You know how many survived? No one.” He is resigned to letting the men die due to company policy.

But being so handsome, Laurence wants to impress Juliette Binoche (whose brother is one of the 33), so goes all Obama Community Organizer and sequesters earth-moving equipment with a Latin-American foreman – Gabriel Byrne. Who the FUCK is casting this film? (And we thought this kind of “whitewashing” only happened during the ‘50s and ‘60s.) Welshman Byrne plays a red-skinned Mexican, and uses an accent that crosses just two inches over into being racist. In that accent he tells us the problems of drilling down the distance of the Empire State Building, the unbreakable diorite slab, the drill deviation factor, that it never goes straight down… amazing facts… amazing accent.

The men have food and water for 3 days for 30 people. By the light of their helmet lamps, they assign Mario (Banderas) the food monitor, and apportion it out in smaller and smaller rations as the days drag by. By 12 days, there is nothing left. How did these guys survive for 69 days?! We are privy to their escape attempts, arguments, breakdowns – including a contention over who would hire an author to co-write a book upon their escape and who should reap the rewards of such product. (They would agree on author Hector Tobar, whose account this movie is based on, and equal royalty shares.) But it is truly amazing how 33 men held their sanity in that distressing entombment, not one of them going stir crazy or murderous or eating-my-arm insane!

Welsh-Irish character actor Bob Gunton is Mexican President Piñera (didn’t Tim Robbins escape from his jail by digging a mine shaft and swimming through shit?); he employs an accent just to the point of not sounding racist, playing the situation for political gain. And James Brolin appears out of nowhere as one of the drillers, and by now, the racism is so sharp and diamond-edged, they should mount it on the end of the drill bit and GIT ‘R DONE. 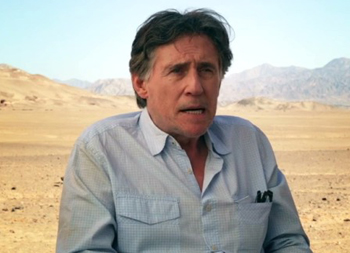 “Yes, I can do some kind of South American accent
if you pay me.”

We hear the failed attempts from the miners’ perspective; the noise of the drill above them, the fading crunch as it deviates to the side… After 16 days, Byrne gives up “They had food for 3 days. It’s 100 degrees down there. It’s like a tomb.” But the handsome guy rallies everyone and hooray, the drills are fired up again… It makes us wonder at the motivation of the company who rescued the 33. Profit? Ethics? Religion? For the love of Man? Why did the company drill past their point of believing the men had enough resources to survive? That’s empirical data. After 20 days, they were going to be bringing up corpses. Who was funding this company? Who reimbursed the expenses after the 69 days of labor? Whatever the underlying reasons, the fact is – it got done, and that in itself is tear-welling, perceiving this as humanity helping the “least” of us (these men were common laborers, not famous or rich). In the final telling it was humanity at its best.

Before the rescue, an initial drill hole was used to send down supplies and communication devices to the 33. Then a little capsule is rigged and each man is brought up one at a time, a 15 minute slow ride through solid rock. What a thought! As we saw on those news broadcasts, when the effervescent “Super Mario” Sepulveda is freed, he woiks the crowd in a Chile chant.

While we see the real life 33 during the end credits, now gathered again in brotherhood and survivorship, pondering on humanity at its best, we can’t help that pendulum swinging one last time towards humanity at its worst – the corporation responsible for the negligence in almost killing these men goes completely unpunished.

imdb
Word Count: 1,370      No. 1,246
THE PRESS
New York Post: The untold story of how the buried Chilean miners survived
THE BOOK
[from Wikipedia] During the 2010 Copiapó mining accident, while still trapped in the mine, the 33 miners chose to contract with a single author to write an official history so that none of the 33 could individually profit from the experiences of others.
The miners chose Héctor Tobar who had exclusive access to the miners’ stories.In October 2014, he published an official account: Deep Down Dark: The Untold Stories of 33 Men Buried in a Chilean Mine, and the Miracle That Set Them Free.
THE “ROCK” STAR