Giant ants – irradiated by atomic bomb testing – overrun the Californian desert, and big white Californian men are there to save the day.

In 1954, atomic power and its “radiation” was the driving device behind 10,000 shitty B-movies. THEM! is one of them. What sets it apart is that director Gordon Douglas and the cast are taking it as seriously as ants in their pants. 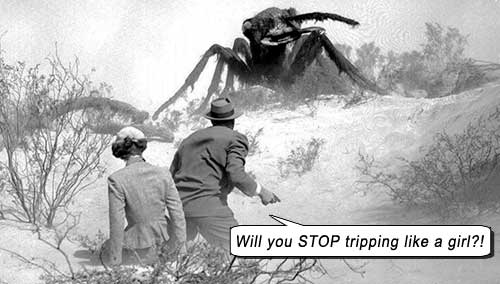 James Whitmore (back in the day when he was a leading man and not just a That Guy) is Sgt. Ben Peterson, who spends the first 20 minutes of the movie trying to find out what wrecked buildings and killed people on his desert beat – and didn’t steal anything except sugar. These opening sequences are quite eerie, where we never see “the monsters” but are on the trail of their havoc. (An alarming distraction is the police uniforms being so darn spiffy – in this black and white movie, we can clearly discern they have a dark blue base, with robin’s-egg blue highlights on pockets, epaulettes, stripes down sides of trousers and – BOW TIES! Really, I want to dress my band like this for our next corporate gig.)

Maybe the seeds of Mr. Whitmore’s B-status were being sown right here, as no matter the excellent somber job he is doing as the cop who takes charge of an investigation higher than his pay grade, the filmmakers nonetheless bring in pre-Fabio heartthrob James Arness because he’s got squarer shoulders and a bigger cock. He’s FBI agent Whitey Whiteguy, who does a mean Peter Graves impersonation, enough to get him into the pants of the Chick With The Pointy Bra (Joan Weldon). Joan is a doctor who–snigger, okay, let’s just move on…

Edmund Gwenn (Kris Kringle in MIRACLE ON 34TH STREET, 1947) is the scientist who knows everything because we need the explanations. He’s also the “conscience” – or the Whitey Guilt, depending on how you look at it. He utters the premonition: “We may be witness to a biblical prophecy come true, and there will be destruction and darkness come upon creation and the beasts shall reign over the earth.” Relax, Richard Crenna! He also melodramatically delivers the movie’s message in the final line, “When man entered the atomic age, he opened the door onto a new world. What we eventually find in that new world nobody can predict.” Did he switch from 3rd person to 1st person because the conceit was just too much to bear?

Unfortunately, THEM! cannot retain its ominous tension, as the giant ants have to eventually be revealed – and the filmic technology of the day cannot support the visuals. The 10-foot ant puppets are on dollies that smoothly slide them across the ground, while puppeteers madly waggle the ants’ heads, legs and antennae and try not to get shot by the jumpy army doofuses. The visuals degenerate to goofiness, but the concept of the ant queen birthing more monsters in her lair was obviously so powerful, none other than James Cameron copied it in ALIENS – and with flame-throwers to wipe out the nest, as Whitmore does here.

Fess Parker (the same year he was Davy Crockett for Disney and a decade before he would become DANIEL BOONE for a generation) is a young pilot with the honor of the stupidest dialogue. He agitatedly describes seeing “flying saucers” (a word which I detest for its ignorance, which is vindicated right here) and, so he tells us, “they were shaped like ants!” So why are you calling them SAUCERS, idiot?! In what universe is an ant shaped even remotely like a saucer?

Movie seems to go into ANTi-climactic overtime after a nest of ants is killed, and Santa Claus messes with everyone’s Zen thing, telling them they still have to find the queen and burn her royal thorax. This plot point is wrapped into a rescue mission for two young boys, and it’s every bit as badly-staged and bombastic and Go-USA as any 1950’s movie that makes the army look like they’re the answer to everything. Because when you want something done with maximum fuss and minimum efficiency – call the United States Military!

When The Army rolls through town, it’s like the cavalry has arrived: everyone drops what they’re doing and sensually watches the jeeps and trucks laden with manly men tear through the streets – the white ladies in the diner being served by white waitresses, the white cops and white citizens watching a TV in a store window serving white people, the white people milling in the city streets near the white stores, the one black guy in town shining shoes…

They even give all the principals spiffy army-issue clobber to wear! Whitmore does his serious act right to the end, until an ant puppet’s mandibles chomp those fatigues in half – with him in them! They even had some army issue for Joan Weldon, in the size Unnaturally Thin; she gets to ride in a jeep with her bra pointing the way, knowing she’ll never have to actually do anything with a waist that slim and sexually enticing. And James Arness (a year before starting his 2-decade run as Marshall Dillon in GUNSMOKE) ambling about like a THING FROM ANOTHER WORLD, and firing his army-issue machine gun like a 10-year-old playing soldier.

Another job well done… uh, half-done… uh, not really done at all…
Wiping out the giant ants – which were caused by atomic testing – and then wiping their hands as if they’ve completed their job is like cleaning an oil spill on the coast and not addressing the REASONS for it – the oil corporations and their unregulated drilling practices. So too, these doofuses in THEM think to ply us with holier-than-thou “messages” about mankind tiptoeing around atomic power, yet never think to storm the Pentagon or the White House with cease-and-desist writs, or even to check other atomic test sites, to stop the problem of radiation causing mutations and gigantism. The lack of cogency is astounding!

Yes, it’s just entertainment; it’s just a movie and no one wants to see dry political wrangling over permits and regulations – but if you’re going to get on your high horse and give us a lecture, then within your own story, make the characters at least AWARE that their puerile shooting and hero-posing isn’t solving the problem of atomic radiation or mutation; they’re cleaning up one mess while countless other unknown messes are continually being created due to atomic testing still being done. Big James gets the second last line: “If this happened here, imagine what has happened at all those other testing sites…” That’s nice – imagining. Is he going to DO something about it? Or is Scientist just going to waggle his finger at us. Preacher, extract the beam in thine own eye first…

And hey, when delivering your message, Santa Claus, why’re you lookin’ at ME? *I* didn’t unleash atomic power; it was Oppenheimer and Bohr and Feynman and those cats – and they’d be the first to tell you, they didn’t want military assholes detonating an A-bomb in the first place!