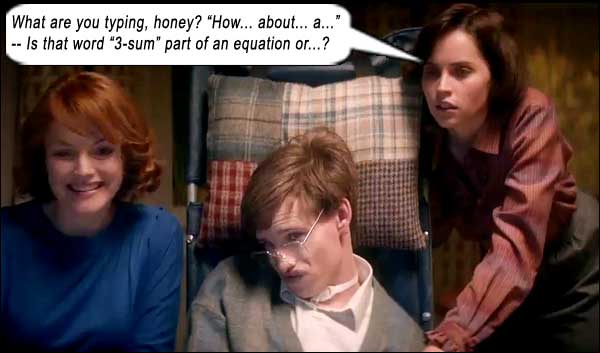 My goal is simple. It is a complete understanding of the universe, why it is as it is and why it exists at all.
— Stephen Hawking.

The brilliant English cosmologist Stephen Hawking appears as a B-character in the movie about his life, while his first wife Jane hijacks the narrative in THE THEORY OF EVERYTHING.

Adapted from the book Travelling to Infinity: My Life with Stephen (Alma Books 2007), THEORY is good for its motives – god knows we need more movies lauding scientists – but is not so much about Hawking and his black holes, as about his wife and her pink one. I lost interest the moment the most important thing onscreen became the love triangle between Hawking, his wife, and her fuck-buddy…

THE THEORY OF EVERYTHING quickly devolves to The Theory of Hitting Biopic Beats, racing through Hawking’s youth – Cambridge college in the early ’60s, drunk friends, Meet Cute with art student Jane Wilde at a party, onset of his amyotrophic lateral sclerosis (ALS) – so it can arrive at the Behind The Music beats; you know, those moments when the narrator ominously intones, “Then… tragedy struck…” And that’s just a big galaxy of wrong. Focusing not so much on this physics genius’s achievements, as on the tragedies that would befall him throughout his scientific career. And no shrift is given to any of the men who collaborated with him on his world-shaking theories (especially Roger Penrose, who appears as an eyeblink). His stature rises in the academic world as if by magic, as we are not shown any of the connecting tissue between major physics achievements, just the final results and acclaim. As his star rises, his body withers, his limbs losing their mobility, his speech becoming more slurred; after being wheelchair-bound for years, he catches pneumonia and must suffer a tracheotomy, losing the ability to talk altogether. The tale of Stephen Hawking has always been one of excruciating tragedy coupled with literally mind-boggling achievement. 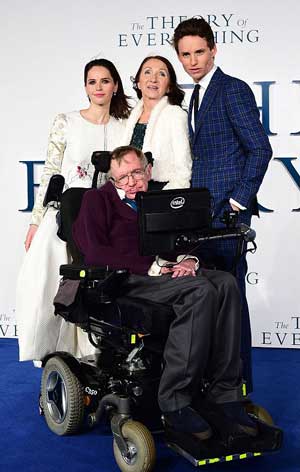 Eddie Redmayne is Hawking, in an uncanny performance that deserved its Best Actor Oscar (but then, we recall the wisdom of Robert Downey Jr. in TROPIC THUNDER on never going Full Retard – i.e. Hawking might have been completely disabled physically, but his mind IS the greatest theoretical physics machine in this world).

Felicity Jones is Jane, who married Stephen whilst both were in college, soon after he was diagnosed with ALS. One wonders at the motivation behind their marriage, because Hawking was given only two years to live. How does that motivation carry through the decades of Hawking’s continued unpredicted existence? Yes, there is a “love story” weaved through Hawking’s immeasurable tragedies, but how does that translate over 100,000 nappy changes and carrying your lover in and out of your marriage bed?

Also, is the story of Hawking really about, uh, “love”? Movie specifically adopts Jane’s point of view, and I don’t trust accounts by wives or lovers of great men. (The silliest thing in the world must surely be Richard Pryor’s “Wife No. 5 and 7” offering opinions on Pryor’s motivations and inner thoughts.) Jane, no matter her own great accomplishments, cannot ever comment authoritatively on Hawking’s inner thoughts. Yet here she is, her subjective views on her ex-husband Hawking turned into “truth” by the motion picture industry.

Charlie Cox is Jonathan Hellyer Jones, the fuck-buddy, whom Jane meets in a location long renowned as the best pickup joint for fuck-buddies – church. Movie suddenly skews to MELROSE PLACE, as we are then compelled to wonder when the obvious sexual electricity between Jane and Jonathan is going to be conjugated. And that’s another big black hole of wrong. That shouldn’t be what we’re here for! And why am I now resenting Jane for just wanting a little good lovin’ like any red-blooded human?

If director James Marsh and writer Anthony McCarten want to pull these relationship-manipulation tricks on us, go make another movie. Of course we wonder how Hawking conducted his love life, but don’t make it the focus of the tale! We are told in a euphemistic way that his erections are on a “different system” to the ALS, so through the mind-bending lifelong tragedy of his escalating disease there is at least that one fluttering spark; he fathered three healthy children with Jane – but we are left to wonder how Jane, on a purely human level, extracted her satisfaction from their encounters. Remember, this guy cannot move. He literally “just lies there.” Much is made over the “love” shared by Hawking and Jane, but you lost me at wiping the arse of your lover and still retaining any libido at all.

We tell ourselves there must have been some kind of “arrangement” between them, for Jane not to end up batshit crazy; she must have sought pleasures elsewhere with Stephen’s blessing. And sure enough, she did. Jones was inducted into the family dynamic on the proviso that Jane would still care for Hawking, no matter what she did on the side to get her ya-yas out. However, this very modern, very necessary sex-love-triangle is played like Jones and Jane are star-crossed lovers. And when Jane brings Jones to the Hawking dinner table and they are discussing Hawking’s theories – with her translating Hawking’s slurry language – there can be no greater emasculation of her genius husband, as Jones looks at Hawking as if Hawking is a child who has just learned to speak.

From the outset, THEORY OF EVERYTHING takes it for granted there is a christian god – even though Hawking is an atheist, at the least an agnostic, in that he sometimes makes reference to the term “god” to make a point. This has always been an irritation with me, because Hawking is smart enough to know better, yet we must give him a pass, because he is so debilitated he has to play the game for the fairytalers around him who must supply his drinking water and wipe that genius arse. At the dinner table, their discussion progresses to the existence of God, and Hawking must mitigate his arguments for the forceful insanity (i.e. “faith”) of Jane, who is translating and has Final Say on any views espoused. And the nozzle to his drinking water.

I say again: if he were not wheelchair-ridden, how righteous would be his denouncement of that insanity! Religionists claim atheism is a belief in nothing, when that is totally incorrect. It is actually a pragmatic belief in YOURSELF more manifest than that inculcated in you by a religion predicated on magic and threats. Ironically, Jane’s supposed “strong faith,” and every religionists’ “belief” in religion, Christianity or God – is a belief in nothing! 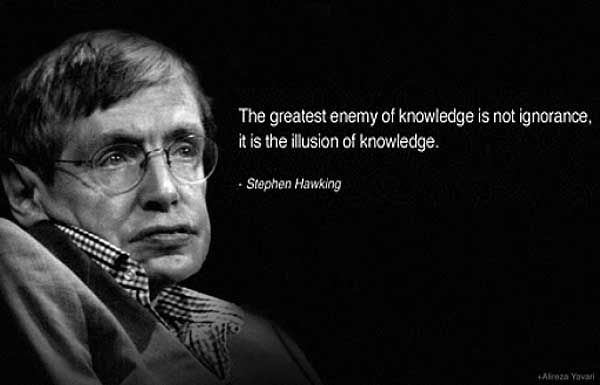 Suddenly, Hawking has written his renowned tome, A Brief History Of Time; suddenly he is world famous. A few scientific precepts and cosmological theories are floated through whimsical dialogue, but nothing has any context, and even less explanation. The CMB (cosmic microwave background radiation) is mentioned in passing but once – yet it is the most elegant explanation of why the universe has a beginning (i.e. the Big Bang). If you didn’t know any science going in, don’t worry, you won’t know any science coming out. (At least the 2004 TV movie HAWKING included Arno Penzias and Robert Wilson, discoverers of the CMB, and explained the CMB’s significance to Hawking’s work. That movie, starring a young Benedict Cumberbatch, also focused more on the hellish reality of his motor neuron disease and muscle deterioration.) The grandiose cosmology precept intimated in the title – the Theory Of Everything, sometimes referred to as Unified Field Theory, Ultimate Theory or Master Theory (not to be confused with the Grand Unified Theory in subatomic particle physics) – is a bait and switch. Because the movie is not about the physics – it’s about the, ahem, love.

But truly, this is not a love story between a man and a woman – it’s between a man and his mind. Like movie critic Roger Ebert held onto life so many years after his loss of speech and health, for the love of movies, we can only explain Hawking’s tenacity in clinging to life as a pathological dedication to physics equations. My mind is agog at the weight of his misery and his heroism in the face of it. To not be able to move, speak or even perform the most banal tasks of maintenance on yourself. And then to have a brain that spirals amongst the cosmos. Through it all, Hawking retains a startling sense of humor, so quick, so… smart. How does he do it? Hawking himself is living proof that there is no God, for how could a benevolent deity do such a thing to one of its most prized creations? Hawking is also living proof that if God did exist, he is a sadistic prick, straight up.

Over the tragedy of his lost voice, the amusing aside of his now-iconic voice modulator, as he and his family are shocked to hear it has an American accent…

How long can a human’s “love” rally against the onslaught of another human’s physical deterioration? This relentless elephant in the room, this 24/7 emasculation, this destroyer of will, this eroding of humanity. Jane’s patience would eventually wear out. In her defense, she only thought Hawking was going to live two years at the time of their marriage. She never envisioned decades hence, the constant tramp of assistants, caregivers, media as his celebrity increased; booking flights, TV, interviews, lectures, lifting him in and out of that godforsaken chair, wheeling him up and down convention hall ramps; spoon feeding him, dressing him, wiping his genius arse and satisfying his masturbation needs.

Maxine Peake is Elaine Mason, one of Hawking’s caregivers, a flame-haired beauty who reminds us of Ann-Margret in her heyday, who would become his second wife. Movie ends before the dissolution of their 11-year marriage, and focuses on the enduring friendship of Jane and Hawking. Again, giving closure to Jane’s love life with Jonathan and leaving Hawking’s fate open.

And now, at 72, the small part of Hawking’s cheek that he uses to manipulate his voice-modulator and computer is failing. Can there be any greater tragedy? How much more is this man supposed to endure?! At an age when most people are becoming too frail to cling to life, the immortal Stephen Hawking is experiencing the same thing, but in his heightened frailty it means the end of his quality of life itself!

At an age where he could very easily die a natural death, yet Hawking lives, against all odds and speculation, his mind reaching ever further, struggling for that thing this movie forgot he was struggling for – the theory of everything. 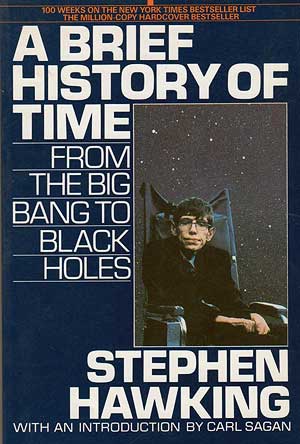