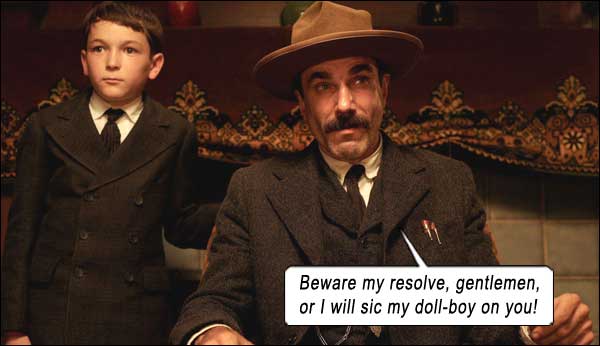 I look at people and I see nothing worth liking.
– Daniel Plainview (Daniel Day-Lewis), THERE WILL BE BLOOD.

In the words of Jack’s Joker, “I like him already.”

Yet I fear him like I’ve feared no other man. Speaking of Jokers, Daniel Day-Lewis is probably the only person on Earth who could replace Heath Ledger in a sequel to THE DARK KNIGHT and still scare the makeup off our pants.

In THERE WILL BE BLOOD, as in many of his films, Day-Lewis is once again the char-blackened engine and screaming lifeblood of the movie. Without him, writer-director Paul Thomas Anderson’s tale of a ruthless oil baron would simply be a very good movie, rather than a steel-toed boot to the groin and a good cry on the shoulder of a wild west hooker. 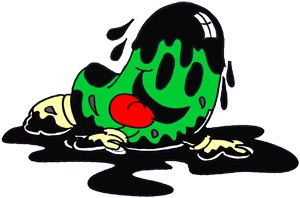 Daniel Day-Lewis won the Best Actor Oscar 2007 for this role as Daniel Plainview, a hardworking prospector who exploits the turn-of-the-century American oil rush by buying drilling lands from uninformed homesteaders, convincing them of his good intent for their properties with a charm and duplicity like the talking snake from the King James bible, ultimately elevating himself to power so absolute that it not only teetered on the edge of madness, but dove in and sensuously rubbed madness all over its thrumming willy.

A brutal accident kills one of Plainview’s oil-hands, who leaves a baby, which Plainview informally adopts as his own, calling him H.W. At first we believe this shows a tender, humane side of the monstrous Plainview, but we soon realize H.W. is merely a strategic prop for Plainview’s pitches to land-owners, to lull them into believing a doted-upon son signifies Plainview is a “nice family man.” Which is farther from truth than the King James bible is from reality. When an oil-rig explosion deafens H.W., Plainview spends the whole night kneeling before the shattered rig, before visiting his son and discovering his deafness.

From a novel by Upton Sinclair, with a soundtrack that threatens to beat you senseless (by Radiohead’s Jonny Greenwood), THERE WILL BE BLOOD is not concerned with the macro historical significance of the oil rush, only with this one amoral, irreligious sociopath whose veins flowed with the viscous black lubricant of the land, intent on keeping humanity at a distance – he never takes a wife, sends his adoptive son to a home, and a long-lost brother proves fake – to the extent that he will ultimately forget what made him strive so hard to amass a fortune he would never have the capacity to enjoy. 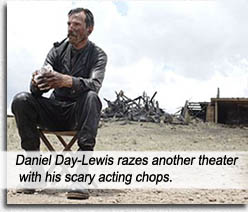 Paul Dano plays Eli Sunday, who also sees potential in the untamed wild land and takes advantage of the simpleminded folk – but in a diametrically opposite manner to Plainview – as an evangelist. In any other movie, his flamboyant, frenetic performance would have gobbled scenery more than Matthew McConaughey in REIGN OF FIRE, and stolen the show. But there is no overshadowing Daniel Day-Lewis and his scary mustache.

Not averse to faking remorse in order to secure the contract for a piece of land, Plainview “confesses” publicly at Eli’s church, to handing over H.W. to a tutor, sending him off to the city for want of patience in raising the deaf lad. Eli badgers Plainview into screaming “I’ve abandoned my boy!” Later, Eli is bitchslapped by Plainview for his troubles. By movie’s end, Plainview has forced Eli into “confessing” himself that he is a false prophet and that God is a superstition – on the proviso that upon his recant, Plainview would buy land from Eli and save him from bankruptcy. One of the movie’s best scenes, illustrating the shallowness of the christian “faith” when poverty scratches at the door.

Some may say Plainview’s “descent into madness” was foreseen, but he was already there at the start of this tale; movie opens by showing us his formidable resolve to power, as he breaks his leg falling down a mine, then claws his way out to strike black gold. His soaring dollar value only heightened his ambivalence towards humanity – if that is called madness, I wanna be in that straightjacket. “I look at people and I see nothing worth liking.” Plainview wielded unlimited power as flippantly as any man with inherent power who knows how to bend people to his will. In this story’s telling, that characteristic proves to be his downfall. But we don’t see his undoing unfold as –

An unresolved sudden ending snaps our necks, and we wonder how to stand and exit graciously while kneeling in awe at the altar of Daniel Day-Lewis.