Dying is Easy, History is Hard.

History tells us General George Armstrong Custer was a murderer of men, women and children, usurper of land from Native Americans, dissolute breaker of treaties, leader of drunken degenerates, and kowtower to military butchers.

THEY DIED WITH THEIR BOOTS ON tells us he was Errol Flynn. 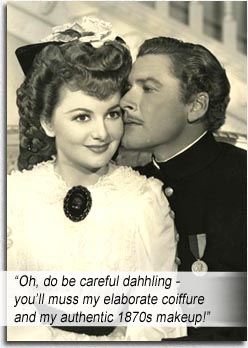 Flynn plays Flynn playing Custer in this reimagining of merciless killer as noble hero, so Whitey white-white it turns albino even before we can start laughing at Errol’s effeteness.

Custer turns up at West Point Academy in 1857 (that timeless breeding ground for American military sociopaths), with a cape draped haughtily across one shoulder badder than any James Brown threw off to flame another yeeagh!, and a feather sticking out of his dandy military cap larger than any Freddie Mercury used on his Brazilian courtesans. Calling him gay-looking would be an insult to gay-looking people.

Film spends the next half hour establishing Custer as a Badboy: late for breakfast, singing after taps, insubordinate; a roarer, rogerer, bounder and puker; “…lowest marks and the highest demerits of any cadet who ever attended the academy, including Ulysses S. Grant… but he’s the best rider and the best soldier we have.”

Excuse the Paralogia Alert, but isn’t your own criteria for determining the worth of a soldier the marks and demerits he scores? Therefore, if he has scored the lowest marks and the highest demerits, pray tell WHAT OTHER CRITERIA ARE YOU MEASURING to determine he is the “best soldier you have”?! Oh, I forgot – he’s Errol Flynn.

And this film is all about The Errol, innit? Not about Custer, or Civil War battles, or illegal American Native murders; not even about revisionism – it’s about Errol being his dandy self (in soft focus whenever possible). One look at that devilishly Brylcreemed hair, pencil mustache and tart, pencil beard (unlike Custer’s actual mungabush) and it’s quite clear Mr. Flynn (and his agent) didn’t want ANYTHING obscuring that woman-magnet mug.

if you’re looking for an authentic biopic, look anywhere but here; on the other hand, if you’re looking for floosie fairy floss fantasy, feyer than Hannibal Lecter and Jack Sparrow at a Willy Wonka tea party – this is your biscuit. Now what say we remove all the murderous historical accuracies as well? For the laydayz. 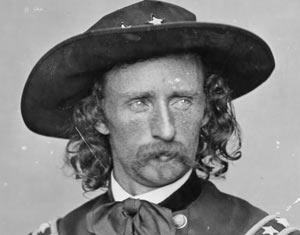 From Bury My Heart at Wounded Knee, by Dee Brown:

Custer’s orders from [General] Sheridan were explicit: “…to destroy their villages and ponies, to kill or hang all warriors, and bring back all women and children.”

In a matter of minutes Custer’s troopers destroyed Black Kettle’s village; in another few minutes of gory slaughter they destroyed by gunfire several hundred corralled ponies. To kill or hang all the warriors meant separating them from the old men, women and children. This work was too slow and dangerous for the cavalrymen; they found it much more efficient and safe to kill indiscriminately. They killed 103 Cheyennes, but only eleven of them were warriors. They captured 53 women and children.

Film goes overboard praising Custer’s rakish insubordination – but how insubordinate could he have been, to ultimately become a general? Here’s the kicker – when he is a general and his men start acting all naughty in their tight trousers and Brylcreem – exactly like he used to – he chides them for it, smashes up the pub and sulks like a big girl’s blouse!

Olivia de Havilland plays Elizabeth, some kind of retarded spinster– but she’s a white woman with slave-niggers, how can she possibly be retarded? Allow me to cite just one example as evidence of her sloth of mind: Elizabeth and Custer meet-cute when he is on BREAKFAST CLUB detention, marching HUP and down the square. After flirty misunderstandings that will make you bilious, they set a date for that night. Custer stands her up. When her father criticizes Custer for being a scoundrel, she scolds him, “Don’t say that about the man I intend to marry!” I rest my case, Yeronner.

BOOTS is drenched in ingrained racism – regarded as “quaint” – that just doesn’t hold up in modern times. Academy Award-winning Hattie McDaniel (GONE WITH THE WIND, 1939) is Elizabeth’s slave-nigger; a real life band vocalist in the early 1900s, I guess if she wanted to be a film actress, she had to bend over and take it like a slave-nigger, so here, she uses that stunted vernacular that whites think blacks used back in the 1870s. And Mexican-born Anthony Quinn plays the one Native American they bothered to write into the script – Oglala war leader Crazy Horse, speaking in broken English, as only Hollywood thinks foreigners do, in yet another taken-for-granted gargantuan filmic insult to the original People of the Land.

More racism as Custer egregiously treats Crazy Horse like a retard: “Put him in the stockade for 60 days – maybe it’ll teach the boy a lesson!” The BOY? So they lock Crazy Horse away for stealing horses – the same horses the military just stole from the Land in the first place.

In BOOTS, Custer is portrayed as outraged when the Black Hills (Paha Sapa) are declared gold territory, in order to entice white settlers to invade Native territory insidiously. In real life, it was Custer who reported the ruse that the hills were “filled with gold from the grass roots down.”

For the purpose of keeping Errol sexy, Custer opines, “If I were an Indian I’d fight beside Crazy Horse to the last drop of my blood!” Sure you would, Jeff Foxworthy! 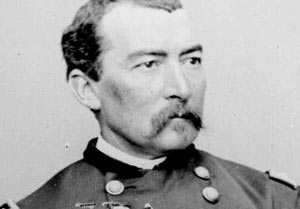 From Bury My Heart at Wounded Knee, by Dee Brown:

When he was presented to Sheridan, Tosawi’s eyes brightened. He spoke his own name and added two words of broken English. “Tosawi, good Indian,” he said.

It was then that General Sheridan uttered the immortal words: “The only good Indians I ever saw were dead.” Lieutenant Charles Nordstrom, who was present, remembered the words and passed them on, until in time they were honed into an American aphorism: The only good Indian is a dead Indian.

General Sheridan was Custer’s contemporary and superior. The meme of the “good Injun dead Injun” was struck through the American military. Custer thought no different.

With gallant and dandy and foppish meters redlining, the battle scenes are ineffectual at best, muddled incomprehensibly at worst. “To the devil with the orders – we’ll ride to the sound of the guns!” I dare say, what valor! We see Custer get stabbed at the Battle of Little Bighorn, last man standing – but no one knows how Custer bought it or when. Why stop making stuff up now?

The filmmakers really try to be sincere in their objectivity. They fail, of course, but at least they insert lines like, “The only real Americans in this battle are on the other side of the hill with feathers in their hair”; a Brit asks Custer, “What do you Yankees think you are – but foreigners yourselves?!”

Custer says to an entrepreneur rival, “You may be right about money – but there’s one thing to be said for glory: you can take glory with you when it’s time for you to go.”

Even if you don’t deserve it in the least, you pompous swine.

Back Dat Custard Ass Up.
The American Natives called Custer “Hard Backsides” because he chased them for long distances without leaving his saddle. Then they called him Long Hair Custer. If Errol’s foppy performance is any indication of the man, it’s surprising they didn’t start calling him Gaywad Custer, or something else to do with his backside.

Revising the true Revisionists.
The westerns of the early 1990s were called “revisionist” (DANCES WITH WOLVES, UNFORGIVEN, LAST OF THE MOHICANS) when it was really the westerns of the 30s, 40s and 50s that revised actual history into Hollywood tropes – all from the White Eyes’ P.O.V.

BOOTS is one of the worst cases of those actual revisionists.