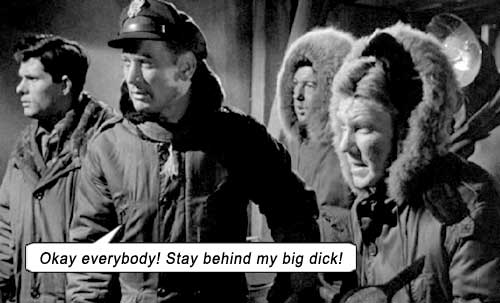 An American Arctic outpost, complete with built-in misogyny, racism, a smartass reporter and military drogues, encounter an extra-terrestrial alien with the constitution of a carrot. And sauté it.

Kinda directed by Howard Hawks (in some goofy mixup, where Christian Nyby is instead credited as director), from a short story by John W. Campbell (Who Goes There?), THE THING FROM ANOTHER WORLD is that typical 1950’s “science fiction horror” movie where anything alien is automatically from Mars without even tracing its spacecraft’s trajectory, definitely evil without even trying to communicate with it, and obviously has to be killed because – just because.

Kenneth Tobey is Captain Pat Hendry, faux-John Wayne military muscle, with the testosterone count of a high school bully and the brains to match; Robert Cornthwaite is Dr. Carrington, a cross between Ben Kingsley and Thomas Lennon (RENO 911), who will clash with Captain Pat time and again over how to deal with the alien they’ve dragged in from a crashed spaceship in the ice. This throwaway monster movie would like to think it explores a somber theme of science versus military, intellect versus brawn  – but that’s just promo fluff. It doesn’t “explore” anything, except jump-scares and sexual innuendo. You see, the scientist is the whining bitch, always getting in the way of the rampaging macho military guy, who obviously gets paired with the raven-haired spinner with the pointy bra. There is no equivocation on their roles: see how the filmmakers set up Captain Pat as the man’s man through the banter of his squad, “Remember that time over Bangkok…?” and then see how they infantilize Dr. Carrington through the dismissal of the raven-haired spinner, “He’s like a child with a toy…”

Speaking of the spinner (Margaret Sheridan), her job at the arctic scientific outpost is quite important: bringing coffee. Oh, and writing reports – dictated to her by the real scientists, i.e. the men. Oh, she also gets to wrap bandages around anyone who is injured, because – girl jobs.

The eponymous “Thing” – a roaring, extra-terrestrial humanoid – is played by big James Arness in a furry facemask (soon to star as Marshall Matt Dillon in GUNSMOKE). And here is the measure of the filmmakers’ Earth-centric jingoism: the Thing never utters one intelligible alien syllable, even though it just piloted a spaceship to Earth – it just roars like a “monster” every time it appears. It never tries to communicate with the humans, and the humans – despite the whining of the bitch scientist – never try to communicate with it; the one chance it gets – the final scene where it faces all the humans in the hallway – it stands mute looking at them. Dr. Carrington’s assessment may be true – that the Thing regards humans as unintelligent life so doesn’t try to communicate – yet why does it go out of its way to kill them for no reason, when it could be trying to get off this stupid planet? It is never cornered or attacked, it seeks out conflict because – monster alien Mars!

Dr. Carrington discovers the Thing has the metabolism of a vegetable, which is an interesting scientific notion; unfortunately, that concept is used here not to denote alien organisms foreign to our provincial definition of “life,” but to denote it is on a “lower” evolutionary scale. Because – humans intelligence heroes. And science is, ironically, stupid for wanting to study the creature, because – military John Wayne testes dick-measuring. Also ironic how movies from the ’50s that try to make humans look like the greatest species in the universe always make us look like such doofuses.

Two things the movie does very well is overlapping dialogue, and everyone wearing their pants up to the fourth rib.

The stupid things are too numerous to mention: “Oh boy, a real flying saucer!” Flying “saucer”. Because it had to be round, of course, because – Alien Spaceship. As soon as a figure is identified inside the frozen block of ice, reporter pipes up, “A man from Mars…!” Because yeah, that’s where all “spacemen” come from, right? We haven’t examined the craft or its instruments or communicated with the alien, but – Mars, yeah. 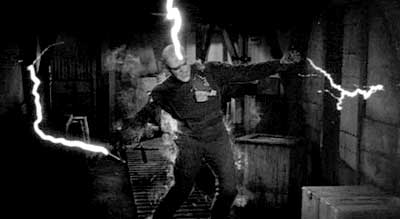 ”Keep on–with the force don’t stop / Don’t stop ’til you get enough!”

And in a movie where stupid scenes are piled on top of and wedged sideways into other stupid scenes, here is the MOST UNBELIEVABLY STUPID SCENE: They’ve already set up a “romantic” past between Captain Pat and the glorified stewardess, with some skin-crawling innuendo dialogue. In one scene they banter over him having his hands tied on their next date (whatever “date” means in 1950’s parlance – talking and eating and kissing with lips closed and clothes on, I guess). Next we see – Captain Pat’s hands actually tied behind his back while sitting in a chair! Fully clothed, of course. And spinner is plying him with alcohol, fully clothed, with her bra pointing due north. Uh, what now, 1950 censors? Is there ANY reason to tie someone’s hands and guzzle alcohol unless you’re going to do a striptease and give him a blowie or a handy? Guess what happens next, modern audience? He unties his hands and leaves. But not before kissing her full on the lips without opening his mouth. Do the filmmakers really think anyone – even in 1950 – was buying this? Why open this can of worms in the first place? I kicked over the TV.

The annoying reporter, stultified from breaking the news of the “man from Mars” is at last allowed to report to the outside world of the vegetable’s demise, and he gives the most awe-inspiring, epic piece of cheese speech ever heard until Bill Pullman in INDEPENDENCE DAY; about how they “defeated the invasion” – what invasion? – and to keep “watching the skies.” Ooooh, because – humans best bigdicks.