Writer-director Judd Apatow’s “sorta sequel to KNOCKED UP” is sorta not as good as KNOCKED UP. THIS IS 40 shows us how boringly randomly arbitrarily mundane and unnecessarily complex life over 40 becomes. Like anyone under 40 will care, and like anyone over 40 will care less. 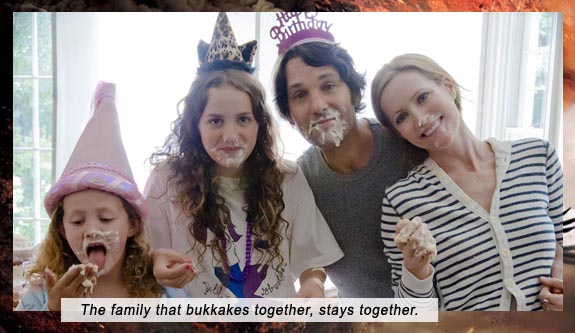 Pete is desperately trying to keep his indie record company afloat with nostalgia, and Debbie is trying to keep her fashion store fashionable by having Megan Fox work there with no panties.

Jason Segel is a fitness trainer putting the moves on Debbie (as he suavely did in KNOCKED UP – and we all know that only fitness trainers can get away with some of those intimate touches on a woman’s body disguised as “training”); Albert Brooks is actually funny as Pete’s frazzled father, who is siphoning money from Pete’s family to support his own young brood of adoptees; Melissa McCarthy is a raving mom of a kid who looks like Tom Petty; and Graham Parker (aging 60’s rocker) plays an aging 60’s rocker.

A few years ago, I read a reviewer waiting with bated breath for the talented Paul Rudd’s ascension to leading man status. I’m sure that reviewer is turning blue by now. Rudd can definitely hold a movie as leading man; trouble is, the lead role choices that he and his agent make are watery: OUR IDIOT BROTHER, I LOVE YOU, MAN, and now THIS IS 40. Though they all have their moments, these movies are in no danger of being hailed as classic cinema.

It’s movies like this that make us believe LOGAN’S RUN had a seriously good point. Because if Pete and Debbie’s moribund attempts at rekindling their lust, revamping their professional lives, or disciplining their children reads as so dull and pathetic, Big Brother needs to step in and either wipe out everyone over 30 or outlaw marriage.

Or – maybe like a dull band that was once vital – do we just need to outlaw Judd Apatow?

It’s a Man’s Whirl.
“I don’t want to have sex with you after taking Viagra.” Debbie is offended when Pete admits to popping a dick pill. And that is how this movie annoys men from its first minutes. So it’s okay to strap on fake breasts, fake eyelashes, change your hair color, get liposuction, wear padded bras, lingerie, strawberry body oil, take nutrients to raise your libido, douche to eliminate your natural sewer stink – but when a man unnaturally enhances the ONE THING that all your unnatural primping is designed to target, that’s somehow unacceptable!

I wanna get something straight about dick pills (Viagra, Cialis, Levitra, et al): The majority of men don’t use dick pills because they have to. Men use them because they’re BORED.

Bored of you systematically stultifying the very lust you want of us when that lust is not channeled in your direction, and sometimes, even when it IS channeled in your direction. Bored of the double standard of we being regarded as providers, yet the only thing we ask that you provide in return is used as some kind of bargaining chip. Bored of all the pathetic time-wasting we must go through for what is essentially a sensation of friction that we can achieve more enjoyably by ourselves, without the intrusion of grasping witch-fingers, toothy head or stubbled labia, or – worst of all – snapping on a deadening rubber hood that is basically a revenue stream for pharm companies. And then looking forward to expending all the effort in what is supposedly a two-way interaction, while you lie in one, two or three positions doing nothing.

Which calls to mind:
Q: “What is a woman?”
A: “Something to lie on while you’re having sex.”

Jason Segel assures Debbie when she whines to him about Pete not being aroused by her, “I wouldn’t need to use Viagra with you.” Of course, not the first few times, but try it after 15 years of marriage. Don’t kid yourselves ladies, even if you are People Magazine’s Sexiest Woman Alive, after awhile, same ole anything is boring, let alone same ole clam attached to same ole non-stop yammering.

And you wonder why we need dick pills.