The Apocalypse is Upon Us… and it’s at James Franco’s house.

Seth Rogen and Jay Baruchel drop in at James Franco’s housewarming party in Hollywood – just in time for The Apocalypse.

THIS IS THE END is a laugh-a-minute, self-referential, absurdist, end-of-the-world comedy starring Rogen, Baruchel, Franco, Jonah Hill, Craig Robinson and Danny McBride – as themselves. Innumerable other dynamic, young, au courant comedians populate Franco’s party, all playing themselves (Mindy Kaling, Aziz Ansari, Christopher Mintz-Plasse, Jason Segel), and a drunk, coked Michael Cera playing Scarface, I think, slapping Rihanna’s behind, being double-teamed in the bathroom by two blondes and ultimately accusing someone of stealing his cellphone “after all the coke I’ve wasted on you bastards!” Franco seems to have the bromantic hots for Rogen, as he pitches him ideas for PINEAPPLE EXPRESS II, in which he sacrifices his life for Rogen against Red, who has become a drug lord.

I love the dynamic in this movie: the fact that all the Rogen Dynasty comedy stars are here, playing off each other as themselves, quipping, teasing and kicking the shit out of each other over their past films, perceived glories, and supposed largesse as Actors.

When the party is broken up by quakes, and a sinkhole swallows Michael Cera, Aziz Ansari and David Krumholtz (“Now if I give you my hand, I’m gonna put ALL my weight on it – you sure you can take ALL my weight?…”), the Hollywood Hills catch on fire, and the core of the Gang barricade themselves in Franco’s house – Franco, Rogen, Hill, Baruchel, Robinson. Jay quickly establishes the tempest outside is, in fact, THE Biblical Apocalypse, and that good souls were taken up in Rapture via blue beams of light. As to why the Gang were not Raptured, well, that’s the fodder for the last act where they all vie to sacrifice themselves in order to atone for their past sins. As Franco says, “Like PINEAPPLE II.” 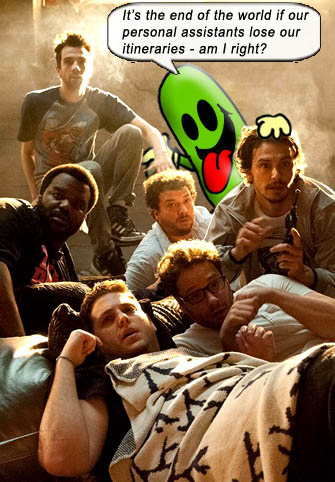 They take stock of their food rations – until Danny McBride wakes the next morning from the bathroom tub and cooks everything for breakfast. What follows is one absurdist vignette after another, as the six try to co-exist and survive, amidst arguments over food rations (“We should all get a fifth of the Milky Way!”), arguments over McBride masturbating all over the house, arguments over what constitutes the Holy Trinity, filming a homemade version of PINEAPPLE II with the video camera from 127 HOURS, Emma Watson (aka Hermione) mistakenly thinking they all want to rape her, a demon-dog (like the one in GHOSTBUSTERS II) rampaging through a house, and Jonah Hill being possessed.

McBride continues to cause trouble with his man-ego until he is “voted off the island” – banished to the outside tempest. He will turn up later with a gimp – a game-as-hell Channing Tatum.

It seems strange to admit that Seth Rogen is becoming a major force in movies, co-writing, co-producing, co-directing and starring in THIS IS THE END. And he is not slouching in any department; matter of fact, this is probably the first “high-concept” film this gang has done (barring Franco – the Raimi SPIDER-MAN films) and it slides off the screen seamlessly, comedy, horror and action, with a nifty little plotline to boot. He might seem like a man-titted Jewish pothead with a goofy laugh, but this guy is Hollywood dynamite. (Speaking of Hollywood, Franco’s house resides in the shadow of the Hollywood sign – for as we know, everyone in Hollywood lives near the Hollywood sign. Just like everyone in France lives near the Eiffel Tower.)

All these actors are masters at “playing themselves,” or at least creating a fiction that seems to be themselves. So it is an added hilarity for us to actually now think of them as themselves.

Each of them, we find, has been treacherous toward one another, so their own Raptures are not happening. They gradually discover that only by sacrificing themselves for one another can they achieve the blue beam of Rapture. Then Franco swears too much while he’s in the blue beam and is dropped. He gets eaten by Channing Tatum.

And in the end, isn’t that how we’d all like to go – being eaten by Channing Tatum?