Does anyone know what is going in THOR: THE DARK WORLD? Certainly not Thor, whose idea of “governing” is punching people. This sequel to THOR (2011) is like watching four grandiose movies squashed into the space of bitches slapping each other in a reality show.

Marvel movies have so far been devoid of overwrought prelude backstories. Not any more, as Odin (Anthony Hopkins, elocuting like he gives just half a fuck) narrates a torpid saga of a war of the Nine Realms between Elves and Asgard and Harry Potter and Gandalf, with the Elves from The Dark World chasing a substance called Aether that will bring darkness to the whole universe. Now normally, I’d say “Why would anyone want to destroy the place they themselves live in?” Then I met a Republican. So the story makes sense.

I think I’ve seen enough medieval hand-to-hand combat to last me the lifetime of Odin – it’s sooo last blockbuster season. I don’t know whether I’m watching the Battle of the Hot Gates, or the Battle of Pelennor Fields. Writers Christopher Yost, Christopher Marcus and Stephen McFeely couldn’t put this eye-raping prelude fintoozla into one exposition sentence from Odin to Thor?

TV director Alan Taylor (who admittedly has some quality shows to his credit: THE SOPRANOS, DEADWOOD, MAD MEN) thinks that gigantic bulbous effects will cure his tentpole erection dysfunction syndrome. So Elves attack Asgard in x-wings and I don’t know whether I’m watching GUARDIANS OF THE GALAXY or J.J.’s STAR TREK.

Chris Hemsworth is Asgardian god Thor, and whereas director Kenneth Branagh instilled regality to the proceedings in THOR by keeping it Shakespeare-Real, the god of thunder has devolved into a brawling machismo buffoon here, now with extra muscles.

Natalie Portman returns as Thor’s love interest, physicist Jane Foster, whose instruments go haywire one day. There’s a disturbance in the Force, which happened last time Thor was on Earth! And Jane, thinking Thor is returning to rape her properly this time, is pulled vagina-first into another realm, where she gets infected by the prelude.

Elf Malekith (Christopher Eccleston, DOCTOR WHO 2005) wants Jane to transfer the Aether elf-cooties to him, to bring darkness to the universe for the Republicans, stalking Jane to Asgard, where Thor took her to impress her into not struggling.

Odin has looked out over the Nine Realms and declared they are “all at peace now.” (I think that eye patch is blocking his view of the Middle East.) And how did they achieve peace? From Thor punching people. Later, after Jane has slapped Thor like a schoolgirl for not calling her in two years, he tells her he was “busy governing” the Nine Realms. Uh, dude, all you were doing was punching people. (Ah, so that’s how you govern, says the W administration.)

The only good thing about Thor punching people in some Realm called Svandelthalemigdmifelm is that his Warriors Three are there with – Sif: Jaimie Alexander as Thor’s once-betrothed, in all her throbbing, sensually-armored, raven-haired, square-jawed morning glory. My insides are abroil, coming like thunder. Thor, you can have my once-betrothed, Natalie Portman, if you but leave me the wherewithal to sniff the thigh-high boots of Lady Sif…

Oh my goddess! Please let me beat the bumps into your breastplate!

Tom Hiddleston is Loki, as fey as ever. Imprisoned for doing something-something, he lets his mullet grow out until he is called upon to help his brah in a pinch. Thor outlines the plan as they sit around a table, intercut with scenes of the plan in action, and I don’t know whether I’m watching OCEAN’S ELEVEN, OCEAN’S TWELVE or OCEAN’S THIRTEEN. Highlight of the plan must surely be when Loki gets to lie on top of Natalie Portman to – yeh, right – “protect” her from a blast of pure elf-cootie.

Seriously good actor Stellan Skarsgård is inexplicably still reprising his role as Jane’s scientist mentor Eric Selvig (that paycheck must be seriously good), and Jane’s intern Darcy (Kat Dennings) now has an intern, Ian (Jonathan Howard, inserted sideways into the script so that Darcy isn’t talking to herself on plot points). And Adewale Akinnuoye-Agbaje is a musclebound monster called Kurse, doing the bidding of his boyfriend Malekith.

When the Elves attack Asgard, they fly along the Death Star trench, because polls show audiences understand that methodology in tentpole blockbusters so why do anything original? Turns out Asgard’s golden-robed soldiers are just as ineffective as the Empire’s Stormtroopers, as they shoot at 1,000 enemy ships and manage to hit nothing but air.

The Guardian of Asgard, Heimdall (Idris Elba), who sees all, manages to not see the 1,000 enemy ships in Asgard’s airspace, that are all going for the Disneyland Castle at the center of the Emerald City where the Wizard of Oz grants wishes to those with a pure heart. Heimdall does manage to tear open an Elf ship with his knife, doing the Douglas Fairbanks/Errol Flynn knife-down-the-sail gag. Pretty badass. Director Taylor wants us to know – he doesn’t just steal from modern movies, but from oldies as well. 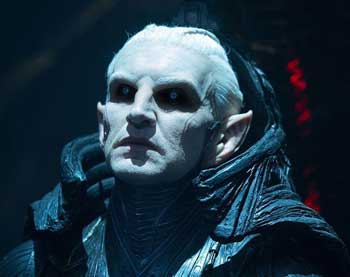 Elf Malekith, after hitting the pipe.

Rene Russo is Odin’s wife, Frigga. (Isn’t that a dirty word in some Realms?) She gets to swordfight Elves to defend Jane. And Asgard loses a queen. No, Loki doesn’t die – Frigga does.

There are a few genuine laughs with the cameo of Captain America, Eric Selvig and his trousers, Thor hanging his hammer on a coat peg, Stan Lee in a mental ward; there’s even some Ancient Alien hokum attached to the climax (that all the old monuments are pointers to where the Realms align), which means that Giorgio busted a nut.

I enjoy the details of Thor’s hammer returning to him. At one point, he jumps off a balcony and Mjolnir zwips into his hand and off he flies! He throws it at assailants, it takes a chunk out of their hides and the balcony, finishes its arc and returns to him; he throws it after a spaceship in fury, then turns in sorrow to his dead mother, and Mjolnir returns gracefully to his hand. In the final battle, its chase after him across dimensions is very cool.

The climax loses its grasp on heroism because, in all sincerity, the filmmakers didn’t think it through: While Thor and Malekith fight, they fall through numerous wormholes and disappear and appear alternately in The Dark World and Earth. Jane has a device to activate some steel poles that will trap Malekith in the Dark World permanently. Ultimately, Thor is punching this guy (one-trick pony that he is) merely buying time for Jane to activate her device. Make no mistake, Jane is the brains here; without her device, there would have been no way to defeat Malekith and his Aether jism, which keeps getting tangled in Thor’s blonde tresses, which constantly look soaked in Aragorn man-sweat. Thor could be ANYONE – Superman, or Iron Man, or even Batman in his fancypants armor. Whether Thor punched Malekith or not, Jane just needed to manipulate the switches on the device she invented and Earth would be saved. How then, is Thor the hero? He’s just punching – that lamo-samo gimmick that superheroes have done for nearly a century now. Thor is like the Lenny to Jane’s George.

Any wonder then, that when Thor asks Odin permission to live on Earth as Jane’s bottom bitch, Odin agrees wholeheartedly?