THOR: RAGNAROK finds almighty Asgard, the Realm of the Gods, annihilated, as foretold by prophecy older than time. Oh, and Thor becomes a standup comedian.

Bathos, noun: an abrupt and often ludicrous transition from the elevated to the ordinary; the sudden appearance of the commonplace in otherwise elevated matter or style.
— Google dictionary.

In the most jarring example of bathos since Keanu Reeves uttered a “Whoa!” in THE MATRIX, director Taika Waititi and writers Eric Pearson, Craig Kyle and Christopher Yost bounce off the walls injecting sophomoric slapstick into what Kenneth Branagh already established as regal Shakespearean in 2011’s THOR. Instead of emulating even the mildly Renaissance sequel, THOR: THE DARK WORLD (2013), the tone of RAGNAROK desperately tries to imitate James Gunn’s tragicomic GUARDIANS OF THE GALAXY (2014), but we end up with GILLIGAN’S ISLAND meets BILL AND TED’S EXCELLENT ADVENTURE.

Seems there are a lot of fans of lowbrow humor out there, as THOR: RAGNAROK is the highest-rated on imdb of the three modern THOR films to date… Easy to fool a populace that would vote a dunderhead into the office of president and then keep him there past all evidence that he needs to be removed.

Look what they’ve done to our superhero, Ma! Credit to Waititi and the writers for trying something new, for eschewing the calcified image of Thor as a prissy do-gooder who speaks like Hamlet, yet the constant stooping to low humor (“Here’s the deal: you want to get back to Ass-place, Ass-berg”– “Asgard!”) and modern vernacular (“I lost my hammer, like, yesterday so that’s still pretty fresh”) mires the movie in a quagmire of tone deafness. A few good jokes open the movie, as Thor hangs in front of a CGI devil, and with his superior might, we can see how Thor would treat the situation as flip, but then the jokes continue, past the point where Thor should be taking his predicament pretty damn seriously. 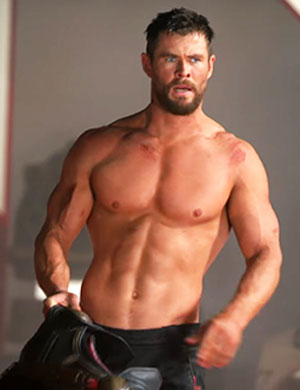 Ragnarok – “The Doom Of The Gods”, often misinterpreted as “Twilight Of The Gods – is the Noah story from Norse mythology, where the world is destroyed (by giants), ultimately sinking into the sea, only to be rebirthed anew, and re-populated from the spawn of just one couple.

The story in THOR: RAGNAROK is interesting in that Thor (Chris Hemsworth and his triceps) and Loki (Tom Hiddleston and his bottle-black mullet) try to stop the destruction of Asgard by beating back Hela the Goddess of Death (Cate Blanchett and her elk horns), only to realize they must encourage Ragnarok instead, as the only means left to thwart the more powerful Hela.

Apart from that conundrum and the excellent production values, the movie itself is a confused, colorful, contradictory clamor of cartoonish claptrap.

In a plot shark jump, Odin (Anthony Hopkins, with so little screentime, it looks like he forced the production to shoot in his backyard, where he could wear his informal Hillary pajama pantsuit) declares to Thor and Loki that Thor has an older sister, Hela, who is returning from banishment by Odin to reclaim her rightful throne. Then Odin fades away to save on burial costs.

On Asgard, the new Watcher at the Rainbow Bridge, Skurge (Karl Urban), becomes Hela’s bottom boy. She tours the temple and reveals paintings of herself wielding Thor’s hammer alongside Odin, conquering armies and hosting gangbangs, narrating her history to avoid a text crawl. Apparently, her “ambition outgrew Odin’s, so he banished her,” locked her away in a cage– Now hold on a minute: How exactly did Odin DO that? Hela’s power is said to be infinite on Asgard – she can destroy Thor’s hammer, slice through the whole Asgardian army in one hot minute, conjure matter from nothing with her gigantic steel blades… What are the rules on Hela’s and Odin’s magic? Odin says he couldn’t stop her, so he imprisoned her. Isn’t that, in effect, stopping her? 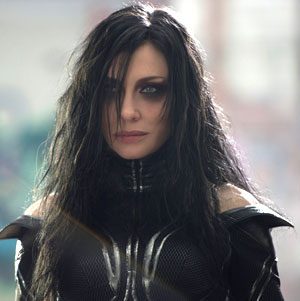 “Okay, whadaya want? I’ve gotta get back to my bachelorette party.”

So what does Hela want to DO now she’s back? She resurrects her giant pet wolf and an army of dead Asgardians, to… to… uh– what does she need an army for if she is more powerful than any army? Ditto with the giant wolf.

Hela leads her army on a march to conquer the Nine Realms, but is stopped at the Rainbow Bridge when she sees Heimdall’s Sword to open the gate is missing. Really? She just appeared in Norway via a green fog – no Rainbow Bridge required! The magic in this movie is just as stupid and meaningless and rule-less as in any HARRY POTTER fiasco. Deux ex machina litter the tale, no rhyme or reason, just a few mad scenes strung together, hastily scribbled in a methamphetamine haze.

Thor lands on a planet ruled by Jeff Goldblum, and it’s just as entertaining as you’d imagine a planet ruled by Jeff Goldblum would be. Amid incongruous jokes aplenty, Thor is forced to be a gladiator, and fight at the pleasure of the Grandmaster Goldblum, and faces off against the Hulk (Mark Ruffalo) who has become Goldblum’s treasured champion. One of the stupidest jokes is Thor recognizing the Hulk and shouting joyously to Goldblum: “He’s a friend from work!” What do you even mean? Being an Avenger is not your “work” – it’s a vocation. It’s not how you earn a salary! Who wrote this idiocy? Impressive CGI on the Hulk though; we can see his diaphragm and his ab muscles contracting when he roars!

Stan Lee cameos to cut Thor’s hair, to make him look trendy. Thor’s cellmate is a big pile of rocks like the Thing, named Korg, and voiced by the director in his native New Zealand accent. The sophomoric jokes continue: “The hammer pulled you off?”

The eventual “team” of supers that coalesces around Thor is Loki, Hulk and Valkyrie (Tessa Thompson), a fellow Asgardian stranded on Goldblumville, portrayed as a strong female in this movie for the woke factor. 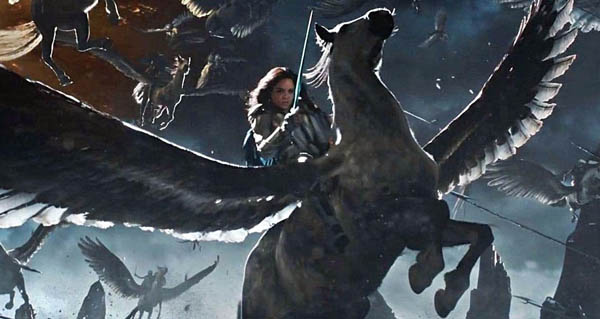 To fight the hordes / Singing and crying / Valhalla, I am kvetching /

There are two glorious moments in the film:
1) the Valkyrie warriors flying toward Hela on their wing-ed horses, and
2) Thor descending into a melee on a bolt of lightning.
These two super-slomo passages are album-cover epic, and Thor’s descent is made all the more majestic by the reprise of Immigrant Song. Thor opened the movie hammering through demons to that song, and now it pummels us a second time… however…

… the majesty of the moment does not hold, because there has been so much incongruous levity that now we’re suspicious of investing our emotions in a moment of unadulterated hedonism in case another idiot gag is attempted. We’re living in an unsure anxiety of when the movie is going to drop out of character again. There are many moments that could be great, now merely interruptions in the madcap comedy.

As a director, Waititi deserves credit for trying to push the Thor franchise in bold new directions, and many of his shots exhibit criminal creativity: Loki and Valkyrie walking toward camera, into the Grandmaster’s hall with a line of soldiers behind them, all perfectly reflected in the mirrored floor, as the camera pans over and behind them to only focus on their reflections in the floor – magnificent! The cinematography is excellent, vibrant and frenetic, like a comicbook; but then –

Thor wants to call his team “The Revengers” – oh, hardee har har; there’s Matt Damon and a Hemsworth brother pretending to be Thor and Loki in a play, with Sam Neill playing Odin; Thor and Hulk as roommates (“You’re being a very bad friend!”); the taser-disks on everyone’s necks are called “Obedience Disks” (really worked hard on that name, did we?); Thor basically doing a role custom-made for Lindsey Lohan; oh, and the wormhole from Goldblumville to Asgard is called “The Devil’s Anus” (thank you fourth-grader script-writers!).

Loki suddenly has the power of an empath, and can see Valkyrie’s memories. How?! (Because we needed some Valkyrie backstory.) And Thor suddenly has the power to summon lightning in his body. How?! (Because Odin said so.) And if he can channel lightning, how does a puny taser on his neck knock him out? Dr. Strange (Benedict Cumberbatch) cameos unnecessarily. How?! (Because he has a good agent.) And who are “Thor’s people” on Asgard, these blanketed, soot-faced mothers and sons and farmers fumbling their way through the corridors, fleeing with Heimdall (Idris Elba)? They look like villagers from a LORD OF THE RINGS movie. Isn’t Asgard only populated by gods? Is this the slave labor, or the plebeian class?

In the end, the lesson learned is that Thor didn’t need his hammer Mjolnir (shark jump!), and that “Asgard is not a place, but a people” (conceptual leap, considering Asgard IS the Realm of the Gods, who are apparently all soot-faced mothers and sons and farmers from LORD OF THE RINGS now). All crammed on a colorful spaceship, fleeing the destruction of Asgard, headed to Earth. Exactly how far away is that in spacetime anyway? The distance used to be covered by the bi-frost – that rainbow wormhole – but what galaxy are the Asgardians coming from “as the crow flies,” and how long will it take them?