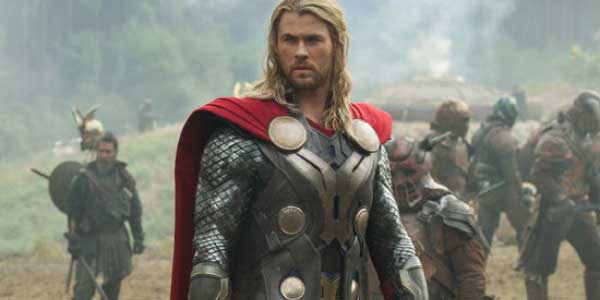 “Hmm, let’s see; who else can I impress with my delicious blond tresses
and massive upper body strength?

Godliness is next to prettiness.

Director Kenneth Branagh brings THOR to the big screen with all the respect that a Thunder God deserves and all the cut obliques that a woman craves. And having Mr. Branagh at the helm explains the preponderance of British accents.

Banished to Earth for his arrogance, the Norse god of bad weather, Thor, must learn humility and sacrifice before he can return to Asgard, the realm of the gods. It’s a simple enough redemption tale, coupled with some fish-out-of-water gags, but what sets this Marvel Studios production apart from lesser superhero tales like CAPTAIN AMERICA or FANTASTIC FOUR is the depth of story and the talent of the actors conveying it.

‘Whaaaat?’ say you, who were pushed back in your seats from the bone-rattling action and eye-dazzling visualization of the realm of the gods; wasn’t this just another bombastic bombast of bombalicious bomba? What set THOR apart from mere mortal movies?

It’s majestic, tragic, epic and colorfully kinetic; and yes, its dazzling action is indisputably modern and geared toward popcorn, but the overarching story of heavenly political intrigue is decidedly Shakespearean (now that Kenneth Branagh connection makes perfect sense): two sons of an aged king want the throne, one to expand the kingdom forcefully, one to betray the kingdom and win it back duplicitously. Both bad reasons, yet pitting each against the other and both against their father. Now I’m not giving the writers any undue credit, all these elements are written into Norse legend and Marvel canon; I’m saying that they brought these elements to the screen very successfully.

Anthony Hopkins is Odin, ruler of Asgard (the only mortal who can realistically play a god – besides Morgan Freeman), all-powerful, all-wise, all-beard, who regretfully banishes his impulsive son Thor for inciting war with the frost giants of Jotunheim.

Blond and body-beautiful Chris Hemsworth is Thor, haughty regal manner and heavenly abs, such a likeable guy, even when he’s being arrogantly medieval. Reminds us of Brad Pitt with bigger biceps. (If THOR were made ten years earlier, with this technology, the role would have gone to Pitt.) We see the unmatched power of Thor as he battles hundreds of frost giants, led by King Laufey (Colm Feore). While his warrior friends ineffectually swordfight like fey minstrels, Thor commands the thunder do his bidding, he cracks the very ground, he flies, he wields the mighty hammer Mjolnir like a spinning turbine, and destroys in one fell stroke a gigantic monster that looks like a Rancor. I especially like the “spots” on Thor’s costume – the filmmakers haven’t scrimped on the design or modernized it, giving him medieval arm gauntlets and a big red cloak to go with his big upper body strength.

When Odin banishes Thor, he also wrests from him Mjolnir, and flings it Earthward with the imprecation that only “he who is worthy of the power of Thor” shall be able to lift it. As a final insult – he pulls off Thor’s spots! Not the spots!

On Earth (known as Midgard to the gods), Thor falls in with three scientists, Jane Foster (Natalie Portman, disgustingly slim and pretty), Erik Selvig (Stellan Skarsgård, who in real life, is actually from the Norse lands where these gods originated!) and Darcy (Kat Dennings, who has that annoying yet adorable girly habit of wearing her sleeves down past her palms). Jane tells Thor of her studies of Einstein-Rosen bridges (wormholes), which explains scientifically the beautifully visualized “rainbow bridge” from Asgard. And Thor tells Jane of his lost hammer, which is really a metaphor for how he’s feeling after being divested of godly powers. It doesn’t matter to Jane; she just wants to play patticake with his unspotted torso. 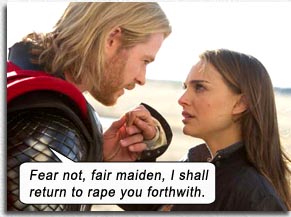 While Thor is on Earth, treachery is afoot in Asgard, as Thor’s half-brother Loki (Tom Hiddleston, channeling Data from STAR TREK GENERATIONS) assumes the throne when Odin has a heart attack and goes into a coma. (Really? Gods can have weak hearts? Calling it “the sleep of the gods” doesn’t make it any less General Hospital.) Loki spins lies to keep Thor Earthbound. But it is not as simplistic as villain-versus-goodie-two-shoes, or villain wanting to “rule the world bwohahahaha!”; Loki’s spite stems from discovering he was adopted by Odin and never told about it, feeling betrayed and deceived. Hiddleston plays Loki almost like a cry for help, as he twists plots within plots in Machiavellian intrigue, his quest for power balanced against his need for acceptance. In the final scenes, when Loki incites Thor to fight him, we can see traces of tears in his eyes, like there is still a brotherly bond between them, but he must tragically follow his principles instead of his emotions. Though these final scenes adhere to action movie protocol and are larger-than-special-effects-life, there are yet those excellent nuances of humanity woven in.

Parallel with this godly intrigue, there’s Agent Coulson (Clark Gregg), skulking about with his government spooks; a familiar face in these modern Marvel movies, his role expanded here to more than just introducing himself as “the Homeland Security guy from S.H.I.E.L.D.” He isolates the crash-landed Mjolnir and sends ineffective agents to make sexy battle with Thor in the rain, to stop him from retrieving it. (And is that Jeremy Renner we see with a bow and arrow, working for Coulson? I’m guessing he’s Hawkeye.) And after all that hot man-battle, Thor finds he cannot lift his own hammer! (Is this a gay metaphor; is he too exhausted from pounding that long line of men? No, that’s just your dirty homophobic mind. Stop looking at his pecs!) Thor discovers he is not yet worthy to wield Mjolnir. Of course! – the required Hero Story Arc! Why didn’t we see that coming? (Probably cos you were looking at his pecs…)

THOR is filled with subtle details that are given no fanfare, yet set it apart from the average movie: when Thor is told the hammer is “fifty miles west of here” he walks out into the street boldly – and is honked at by cars, making us realize ‘That’s right – he knows no road rules!’ – then he looks up at the sun to gauge direction; a subtle gesture that might go unnoticed, this is how people without watches and compasses gauge time and direction!

Loki sends a fire-breathing robot to Earth to “kill them all” (when it lands in a great THOOM on the desert floor, a SHIELD agent asks, “Is that one of Stark’s?” – a sly, sideways reference to IRON MAN). Only when Thor proves his humility, courage and self-sacrifice against this robot does Mjolnir become his plaything once more. And he gets his spots back!

There are no cackling villains, no overacting, no rubbing-hands-in-glee schemes; everyone is controlled and sedate, as befitting a realm of gods. Especial credit to Colm Feore as Laufey, whose devilish makeup simply screamed rubbing-hands-in-glee, but comported himself like a true killer of gods.

There’s Rene Russo looking old and queenly as Odin’s wife; Idris Elba is Heimdall the Gatekeeper, who manages to be All-Seeing except when danger is imminent; Jaimie Alexander is Sif, the hottest of Thor’s bosom buddies (emphasis on bosom).

Movie ends with a title card promise, “Thor will return in THE AVENGERS” – an ambitious, all-encompassing endeavor by Marvel Studios to bring many superheroes together in one movie. Unlike the superhero universe where heroes band together to fight evils that are greater than any single one of them can handle, we’re entering the corporate universe of copyrights and licensing and avarice – True Evil. I wonder who is overseeing it all. What a task it must be to coordinate all the strands of franchises and directors and canon; it’s hard enough organizing five band guys to get to one studio on time and have all their parts learned; imagine what organizing this Marvel Multiverse must be! For Marvel to pull it off, they have become as powerful as the new gods they have been promulgating over the last fifty years. The minds at Marvel Corp are the new superheroes. And it has nothing to do with their upper body strength.

Gods of Creation and creation of gods.
All Superman media is credited, “Created by Jerry Siegel and Joe Shuster.” That’s only because cartoonist Neal Adams fought claws and cape to get that credit after Siegel and Shuster ingenuously signed away their rights. We rarely see credits for other superheroes’ creators due to this same simple political treachery – no one wants to relinquish any monies to actual creators who don’t have the foresight to enter into worldwide, far-reaching contracts in their twenties. The icon was born from creativity, and continues due to avaricious legality.

In the case of THOR, Marvel Corp reminds me of Walt Disney Corp – how Disney took Grimm’s Snow White and Collodi’s Pinnochio and Aberson’s Dumbo and simply called them their own. Who remembers the real authors of these tales, whose names get progressively buried under the passage of time? So too, Thor’s creators, Stan Lee, Larry Lieber and Jack Kirby, ransacked Norse legends to “create” the iconic thunder god. On top of that, even these mortals are not credited with Thor’s creation in the credits – now he’s a merely the “property” of Marvel Studios!

Not very respectful to the god who gave us Thursday. 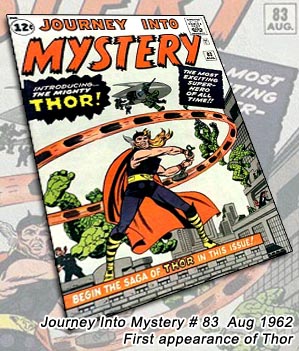