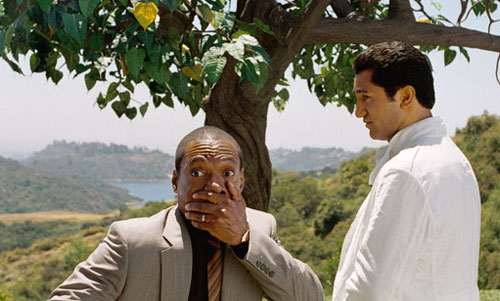 Nine-hundred and ninety words too long.

Eddie Murphy stars as big mouth literary agent Jack McCall, whose encounter with guru Dr. Sinja (Cliff Curtis) leads to a Bodhi tree magically springing up in his backyard, which loses a leaf for every word that Jack speaks. He deduces that when the tree runs out of leaves, he dies. (Movie closes off the loophole of Jack simply writing his conversations by having a leaf fall for every written word as well.)

Accepting this premise is the hardest leap in A THOUSAND WORDS, and once we’re there, movie continues to belabor the stakes – okay, we get it. Leaves fall, Jack dies.

Steve Koren (JACK AND JILL – doesn’t all the dumb writing fall into context now?) actually kicks into a smart writing mode now, as he develops comedic situations from a person not allowed to speak, in a profession that requires verbal communication, negotiating, cajoling, seducing, lying…

Eddie Murphy has long since gone the way of Steve Martin in that he’s lost his comedic edge; that hunger and fire that shot him into the showbiz stratosphere like a fireball. Like Martin, Murphy’s still got the moves, set on autopilot, and sometimes they wring a nostalgic titter from us, but for the most part, we’re mildly paying attention to the GILLIGAN’S ISLAND plotline and only marginally paying attention to Eddie at all.

This isn’t the first time Murphy has worked with director Brian Robbins – NORBIT (2007) and MEET DAVE (2008); also two unfunny comedies. And I tend to agree with a comment made at imdb – that Robbins fuels Eddie’s ego, so that despite the lame box office and critical acclaim of all these duds, Murphy continues to work with Robbins rather than accept a pay cut to work with other directors.

Surrounding characters are merely plot devices: Cliff Curtis is plain and simple as the guru, Kerry Washington is annoying as the wife, Allison Janney is stoic as the publisher, and Jack McBrayer as the Starbucks guy seems to be turning into the Andy Richter of bit parts. Only person who really grabs and shakes his role is Clark Duke, as Jack’s over-eager assistant, who surprisingly provides the most laughs.

Must admit that the payoff – the final few words Jack must achingly vocalize as he knows his end nears – is tear-jerking. Jack must choose wisely how to verbally reconcile with his wife, Alzheimered mother and dead father. Here is where the premise at last commands some weight. But then – they spring SUPERMAN II on us! (Didn’t someone tell Kal-El that if he gave up his powers he could NEVER GET THEM BACK? Then he gets them back.) Wasn’t the final leaf fall meant to cause Jack’s death? Isn’t this what makes his choice to say his last few words all the more powerful? But after Jack falls over dead – he wakes up again (presumably because his character arced to reconciliation). Gee, thanks for reneging on your own rules, movie!