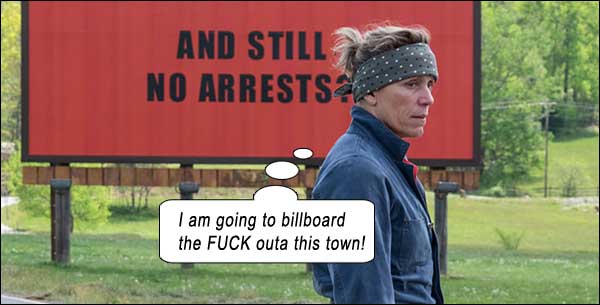 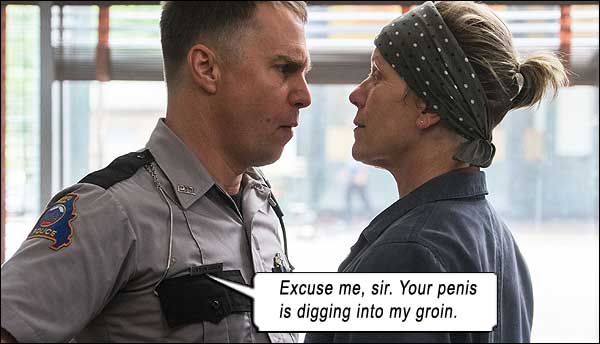 After a murder investigation goes cold, the mother of the murdered girl purchases advertising on THREE BILLBOARDS OUTSIDE EBBING, MISSOURI to turn up the heat on the local sheriff, by reminding the town of his neglect:

AND STILL NO ARRESTS?

It’s not a murder mystery, it’s not a cop drama, it’s not about racial tensions; it’s a story about love. Yes, really.

The love of a mother for her murdered daughter.
Writer-director Martin McDonagh (IN BRUGES, SEVEN PSYCHOPATHS) leans into the story immediately, as a woman (Frances McDormand) drives past three disused, decrepit billboards, missing panels, shrouded in morning fog, on a lonely stretch of country road. She visits the advertising agent (Caleb Landry Jones) and buys the space. We find out the woman is Mildred Hayes, whose daughter was murdered seven months ago, with no killer found. The billboards “keep it in the public eye, focus their minds on the case…”

The love of a man for his family, and his recognition of another’s love for her family.
Chief Willoughby (Woody Harrelson) is a tragic sympathetic figure, walking the line between placating Mildred and the reality of the long-gone killer. And he has cancer. His solution to spare his wife (Abbie Cornish) and their kids the pain of seeing him deteriorate, would go hand in hand with his decision to secretly aid Mildred in keeping those billboards up.

The love of a damaged deputy.
Willoughby’s deputy is a racist sadist named Dixon (Sam Rockwell), the walking id of the department. He is the first to see the billboards – in reverse order; a great storytelling device. In his extreme attempts to nullify the billboards and their owner, we discover he harbors a devotion to Chief Willoughby that borders on homosexual. In a moment of blind rage, Dixon throws the advertising agent out a two-storey window. Yet when he reads Willoughby’s final letter to him, our tears will flow for Dixon. It is not – as we thought – a letter of chastisement, but of love: “Hate never solved nothing, but calm thought does. Try it for a change. No one will think you’re gay. And if they do, arrest them for homophobia. Won’t they be surprised?” Dixon finds he had the belief and love of a man he admired, and it affects him profoundly, so much so that his last act – or what he thinks will be his last act – is an act of love, as he protects the cold-case file of Mildred’s daughter, by throwing it from his burning body.

Though there is an explicit theme of “anger begets anger” (voiced by many characters), it is ironic then that the many acts of love blindside us.

The love of a man who saves his bully.
Peter Dinklage (GAME OF THRONES) plays the put-upon town midget, who holds a torch for Mildred, and who is regularly taunted by Dixon. It is he who arrives first to aid Dixon in a conflagration. (His inclusion in the tale gives it that IN BRUGES flavor.)

The love of a man who forgives his assailant.
The agent, thrown out the window by Dixon, is shocked to find Dixon sharing his hospital room. Instead of using the opportunity to avenge himself on the helpless Dixon – he quietly brings him an orange juice.

With so many acts of love passim, we realize there is no reason to portray Mildred’s family life in flashback as idyllic. No Kodachrome moments, as Mildred wages open battle with her rebellious daughter (Kathryn Newton), who at one point screams, “I hope I get raped on the way!” as she storms out of the house. Mildred’s ex-husband (John Hawkes) is no better, as a wife-beating redneck who left her for a 19-year-old (Samara Weaving). Mildred’s long-suffering son (Lucas Hedges) seems the only balanced family member.

Mildred herself is not painted as a rational hero. Her solution to locating her daughter’s killer is undeniably fascist – databases and “every baby born listed on it,” and if there is a match for a murder, “simply kill the person.” Talk like this, whether sarcastic or serious, tells us there will never be an answer to her billboardic prayer. Yet we can still conjure sympathy for Mildred, as she brings new flowers to the billboards every day – and when the boards go up in flames from a mysterious arsonist, her soul-stricken gasp reminds us that not only were they a prod to law enforcement, they were the shrine, the last memento of her daughter’s existence.

Frances McDormand would win the Golden Globe for Best Actress. Sam Rockwell, who should have won Best Supporting Actor for GALAXY QUEST (1999) or MATCHSTICK MEN (2003), or Best Actor for MOON (2009), at last nabs a Golden Globe for Best Supporting Actor in this film. Now others become the supporting actors to watch: the formidable character actor Zeljko Ivanek as a deputy, imperious Clarke Peters as the new Sheriff. Each performance in this movie is an integral cog in an exceptional ensemble.

McDormand plays the tragic mother with a very distinctive look: overalls, bandanna, short hair tied back, no makeup. Though it works for the story, it’s disconcerting that only by bowing to male tropes can a woman be regarded as “strong.” The opposite end of that spectrum is the searing hot woman who uses her allure to ensnare men, which is also an incorrect rendition of “strong.” It’s a much bigger discussion than we have the time for here – just mentioning it because I’ve seen so many excited women praising this “strong” woman, when they’re only praising her “masculine characteristics.”

The tone of THREE BILLBOARDS constantly flits from somber to black comedy, although I don’t think it is quite as successful in the comedy department as McDonagh’s other truly black comedy, IN BRUGES. When taken out of context, in trailers, some scenes spark with comedic energy (for example, Mildred kicks a boy in the nuts, then kicks a girl in the cunt – it’s funny because it’s rare!), but in the context of the story, this act illustrates Mildred’s frustration and isolation; the kids getting their comeuppance is not funny, it’s satisfactory. Then Mildred swears outlandishly when driving past a live TV reporter – it’s funny because it’s a blooper! – however, she is merely reminding the reporter that the real story (her daughter’s rape and murder) is far from over. It strikes us that rape and murder is not funny, but tragic.

Yes, there are instances of anger begetting anger: Dixon’s bitter man-mom (masculine Sandy Martin), coaxes Dixon to “get to Mildred through her friends”; the priest (Nick Searcy) comes into her home to petition against her billboards: “If you hadn’t stopped coming to church, you’d have more understanding of people’s feelings” – to which Mildred reminds him of the clergy’s boy-fucking proclivities; the dentist talks ominously of “Willoughby having friends in town,” while he moves in on her mouth with a whizzing drill – which Mildred grabs and redirects through his thumb; Mildred’s ex-husband hasn’t got a kind word for her current life or choices; and Dixon himself is unwitting victim to Mildred when she unleashes her anger through Molotov cocktails.

To answer your question, No, THREE BILLBOARDS (filmed in Sylva, North Carolina) is not based on a true story, McDonagh inspired to write it upon seeing billboards relating to an unsolved murder in some southern American state.

Movie includes the song Walk Away Renee (originally performed by The Left Banke 1966; The Four Tops 1967 cover is here) – such a classic sound that brings us into another era, and finds some resonance with the movie: “And when I see the sign that points one way…” / “Just walk away, Renee / You won’t see me follow you back home…”

The conclusion of THREE BILLBOARDS might be comparable to NO COUNTRY FOR OLD MEN, with no satisfactory wrap on the murder mystery. But it never was about the murder; it is about redemption, not revenge or even justice. It’s not about catching the killer – it’s about the repercussions of putting up those titular billboards, and how that act redeems a few souls, not least, Dixon and Mildred.

Many viewers comment on wanting resolution on whether Dixon and Mildred followed through on their vendetta. If you read the movie carefully, you’ll realize it is telling us that all these people are inherently “good” and only needed to discover that within themselves. With that in mind, we might conclude that Mildred and Dixon found some kind of internal peace while in the act of moving forward to “enact justice,” and probably turned back around and had a beer with Dixon’s Sasquatch mom.

Walk Away Renee ♦ THE FOUR TOPS

Walk Away Renee ♦ THE LEFT BANKE