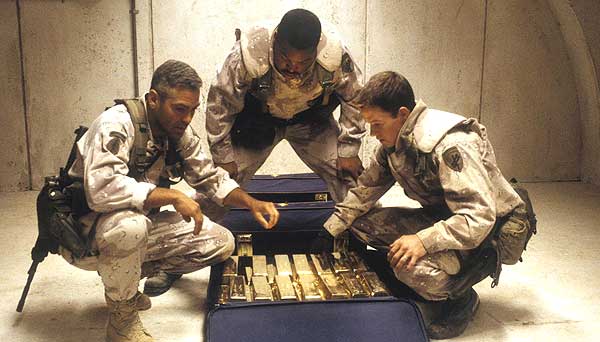 … and to lay before the newborn king, they brought gifts of gold, bling and jockstraps.

KELLY’S HEROES without the ragtag.

War is not just Hell. In THREE KINGS, it is confusing as Hell.

Four American soldiers behind enemy lines on a mission; they’re not here to fight a battle, they’re here to rob a bank.

If the plot sounds familiar, it is KELLY’S HEROES for the morally ambiguous generation. THREE KINGS is a stunning, ferocious black comedy; heavy action, heavy emotion, heavier incongruity, as a troop of American soldiers in Iraq attempts to steal Saddam Hussein’s gold.

Across a flat expanse of desert, an Iraqi appears in the distance, and an American soldier calls to his distracted peers, “Are we shooting?” No one knows.

During a roundup of Iraqi prisoners, a map is pulled out of an Iraqi soldier’s butt. Soldiers Troy Barlow (Mark Wahlberg), Chief Elgin (Ice Cube) and Conrad Vig (Spike Jonze), led by cynic soldier Archie Gates (George Clooney), formulate a plan to go AWOL for half a day to steal what’s on the map – Saddam Hussein’s gold bullion stash – under the pretense they are distributing it to the wronged people of Iraq.

Nothing goes as planned.

And nothing is as it seems in this hell hole waste land: they attack the location on the butt map – no gold; they notice civilian Iraqis clustering around a well – soldiers in disguise guarding a subterranean vault; the gold bars are not in sturdy roadcases – they’re in cheap tourist suitcases; a gun battle is a few strategic shots, not sexy slomo spraying of bullets; they shoot up an oil tanker – it is full of milk!; sinister Iraqis garbed like STAR WARS Sand People rescue Archie (Clooney) and his crew and lug the clinking gold bars to a safe haven underground; like Viet Nam, the hostiles look like the friendlies, so no one knows who and when to shoot; and the press and military alike have no idea why they are there, exemplified in the miscast Nora Dunn (SNL) as a self-serving reporter and doofus Jamie Kennedy as her military liaison.

And so the movie goes, every single scene filled with strange actions and reactions. The four soldiers stumble on a group of hostage Iraqis, led by Cliff Curtis – over their avarice, they find their souls; realize they must help these people… then steal the gold.

Director David O. Russell tells us via opening text: “The makers of THREE KINGS use visual distortion and unusual colors in some scenes in this film. They intentionally use these unconventional techniques to enhance the emotional intensity of the story line.” Shouldn’t that be something us little green reviewers tell you?

Spike Jonze warbles the tenuous thematic link: “We three kings be stealin’ the gold…”; Ice Cube loves playing soldier in his ‘flage – at least all his guns are legal now; Clooney is decisive as a pouncing lion, and Marky Mark somehow finds an excuse to get his shirt off (even if it’s Iraqis ripping it off to torture him).

The torture scene is also a confusing revelation to all those inculcated to believe Middle Easterners are one-dimensional sadists, as the torturers cover their eyes while electrocuting Barlow (Wahlberg). The interrogator asks, “What is the problem with Michael Jackson?” At first, big laugh – then the biting indictment behind the question, “He is the King of Pop of sick fucking country. A black man make the skin white and the hair straight – and you know why? Your sick fucking country make the black man hate himself. Just like you hate the Arab and the children you bomb over here.” The interrogator describes his family’s death, with the roof falling in on his son, “Can you think how it must feel?” We almost ally with the Iraqis during that scene. Until we see Marky’s abs.

In the most amusing cultural flashpoint, Archie invokes, “George Bush wants you to unite against Saddam!” This was back in the day when the Bush name could incite fevered excitement in Iraqis. Last time that’ll ever happen…