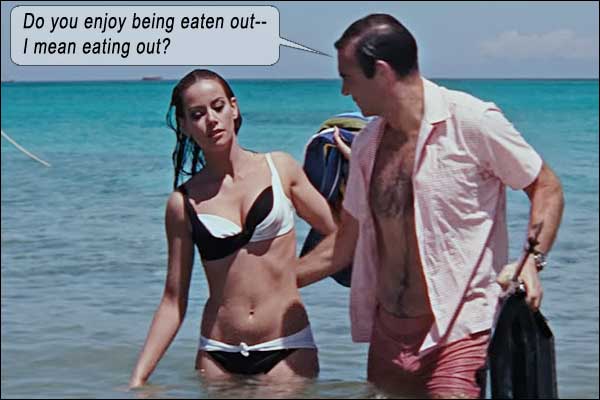 I lost track of how many women James Bond bangs in this movie. Is that why they call it THUNDERBALL?

Truly, THUNDERBALL features the best-looking collective female cast of any Bond adventure! And there is not one standout beauty – they’re all stunners! The Blond Nurse, The Sisterly Agent, The Villain’s Naif, and The Redhead Slut.

Sean Connery returns, in this fourth Bond film, more manly than ever (from the ninth Ian Fleming Bond story, Thunderball, published 1961), directed once again by Terence Young, who also directed DR. NO and FROM RUSSIA WITH LOVE, but has found a real hero stride in this film that raises it killing levels above its predecessors. 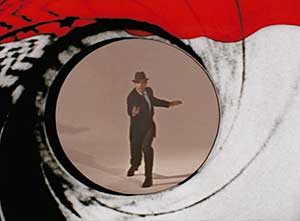 Gun Barrel Connery. The first time Sean Connery would perform the gun barrel opening sequence (instead of Connery’s stuntman, Bob Simmons, who did the first 3 movies), which would start the convention of the Bond Actor actually performing the gun barrel scene.

The cold open is sensational, as Bond ferociously beats off a transvestite—uh… then straps on a thruster and blows into the sky—uh… then shoots loads of his liquid onto men trying to take him roughly from behind—uh… Well, it IS called THUNDERBALL…

After the lackluster action in GOLDFINGER, this was a welcome return to form for Bond, with a noticeable upgrade to breathtaking fight choreography, and with an all-new hairline that looks considerably fuller! (Connery’s augmenting toupees had begun.)

The opening credits drag us underwater, with silhouetted swimming naked women, while Tom Jones beats to death the title song Thunderball more ferociously than Bond just beat that ladyboy. (The man in drag was, in fact, Bob Simmons, Connery’s stunt double; we can clearly see the resemblance. I think Connery took an extra pleasure in beating Bob here since he had been doing all the gun barrel sequences up to this point.)

We met the worldwide criminal organization known as S.P.E.C.T.R.E. in the second Bond film (FROM RUSSIA WITH LOVE); now we see it in all its glory, in a capacious underground lair, with a leader named Number One, whose face is still obscured as he sits in an elevated chair and strokes his pussy. Before him, in two rows of chairs, all his “numbered” agents sit, making their reports; when one displeases him, Number One electrifies that agent in his chair, which would sink into the floor with the corpse, then rise again, empty. All done via a control panel at Number One’s fingertips with buttons that still look like marshmallows.

S.P.E.C.T.R.E (SPecial Executive for Counter-intelligence, Terrorism, Revenge and Extortion) would become the bane of Bond’s existence over numerous films to come. (Number One would be revealed only in the next film, YOU ONLY LIVE TWICE.) Their plot here: steal two atomic bombs and extort world leaders for £100 million on the threat of blowing up UK and US cities.

We meet Number Two (Adolfo Celi as Largo), tasked to steal the bombs and look Italian.

The bomb-stealing scene is a drawn-out affair, showing every step in dragging detail, I imagine because international espionage plots as big as this were new to cinema, and the filmmakers wanted to establish how meticulous the planning was; we see an impostor stealing the plane with the bombs, sinking the plane in the ocean, Largo’s diver team recovering the bombs, then spreading camouflage netting over the plane on the ocean floor… phew! I thought we’d never get back to the girls in bikinis… 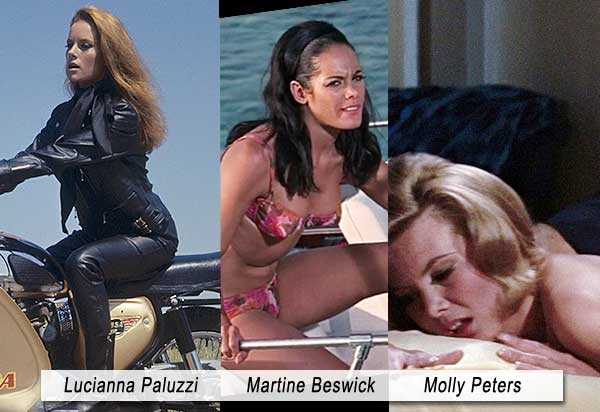 After Bond blackmails the needy Blond Nurse (Molly Peters) into a sauna-bang, he is summoned to MI6. In an intriguing scene, we see the seated backs of all the other 00 agents – it seems there are nine of them – as they face their boss M (Bernard Lee) and a British toff. (There’s always a British toff crying to M to save their bacon.) The 00s are tasked with finding the bombs within the next four days in an assignment called “Thunderball” – for the mushroom cloud the bombs might make, or the number of chicks that Bond might make.

Bond requests being sent to Nassau in the Bahamas because he saw tits in the mission dossier – serves them right for having more pictures than writing (Movie Trope #1!). Bond tracks down the offending mounds of fury, straining against the bikini of Domino (Claudine Auger) who happens to be Largo’s naïf mistress. (What are the odds?!)

Q (Desmond Llewelyn) makes an appearance “in the field” to outfit Bond with spy gadgetry, and chastise him for treating all his inventions “with equal contempt.”

THUNDERBALL does not globe-trot, basing itself in one stunning location; blue seas, coral reefs and glistening sand, sun-dappled tropical palms – the scenery is breathtaking. Bond’s ever-present CIA go-fer Felix Lieter meets him in the Bahamas (Rik Van Nutter, the third actor to play the role, in as many movies), along with a smokin’ brunette Agent, Paula (Martine Beswick) whom Bond treats like a sister; I think it’s because, sadly, she takes her cyanide pill when captured by SPECTRE, and they didn’t want to complicate Bond’s already full plate of groinal investment.

This is where it gets confusing, because the naïf Domino and the Redhead Slut assassin Fiona (Luciana Paluzzi) look so much alike that I lose track of who Bond is banging – their only difference being Domino is quiet and collects starfish, while fiery Fiona turns up on a motorbike with missile launchers. (Can I help it if they’re both metaphors for sex?)

Later, Fiona, who has promised Largo that she would be the one to kill Bond, mocks him for thinking that he could turn her with a stiff bonk, “I forgot your ego, Mr. Bond, where you make love to a woman and she starts hearing heavenly choirs singing. She repents and turns to the side of right and virtue – but not this one!” A direct piss-take of GOLDFINGER (where Pussy Galore did exactly that in the clunkiest of plot twists). Apparently, it was quite a common critique of GOLDFINGER at the time, prompting the filmmakers to insert this self-effacing jab! 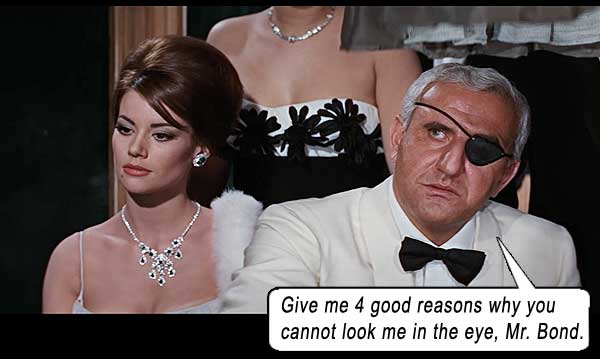 THUNDERBALL retains a much more elegant look and feel after the stodgy GOLDFINGER. Terence Young’s camera is livelier than in past Bond adventures, taking us with it panning into the action, employing creative screen wipes, and sometimes using what seems like a Steadicam as it tracks the walk-and-talks (a nod to filmic technology improving, no doubt). Written by Richard Maibaum and John Hopkins, the storytelling is kinetic, the fight scenes energetic, and Bond doesn’t let himself get captured nor wind up in easily-escapable traps; and no villains tell him their grand plan (the one time we hear the world-shaking Plan is from Number One himself on the ransom tape). For the first time, James Bond is ahead of the game; whether it’s avoiding sharks or saving all his agents in an underwater skirmish, this movie renews our faith in Bond and justifies his epithet as a superspy. And, Ladies, due to all the water sports and shirtless action, you get to drink in that former bodybuilder’s buff body. Uh-huh. Itself a trap. Not easily-escapable…

Probably the only pointless sequence is the spine-stretcher, where Nurse Blondie straps Shirtless Bond into a wanking machine, and an unseen instigator – “Nice to have met you, Mr. Bond” – ramps it up to Penis-Comes-Off-In-Hand level. Pointless scene, pointless machine, and Bond achieves pointless sex as a result.

Largo at the card table; a GPS tracker on Bond; a pool full of sharks that devour henchmen (Connery actually confronted by one shark without Perspex shielding; his terrified reaction is real); a final richly-staged underwater battle between Largo’s henchies and Bond’s agents, firing spearguns, cutting air-hoses, battling with knives – it’s Helm’s Deep Aquaman Edition! With sea life wading in and out of the fight choreography for authenticity (n.b. sharks WERE harmed in the making of this film!) 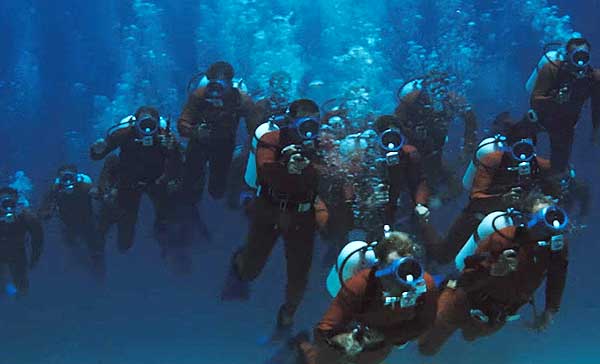 The final fistfight onboard Largo’s yacht is again very well choreographed, with its share of ferocity – but the rear projection of the yacht speeding out of control flops us right out of the movie!

This is not the first time Bond has ended up on a lone life raft with a busty woman (one of those chicks above – who cares which one, right?), but in keeping with the kinetic nature of this outing, instead of plowing the wet wench, Bond sends up a balloon with a tow line attached – and an MI6 cargo jet swoops overhead, grabs the tow line and YANKS all four of them right out of the raft! They fade into the sunset on the tow line, behind the jet – Bond, his woman and his big thunderballs.

imdb
Word Count: 1,700      No. 1,529
“Thunderball” ♦ Tom Jones (opening titles)
There is so much loose talk of Tom Jones “fainting” while hitting that last high Bb in the recording session. It’s so disrespectful! After saying he’s incredible, to then say he hasn’t got enough breath control to know how to convey that note without depriving his brain of oxygen, is undermining everything that makes the man great! Any good tenor should be able to hit that note without killing themselves, although not with the DRAMATIC POWER that Jones draws from his tourniquet trousers. Not to mention that vibrato from his he-man thighs.Can’t verify the fainting story, but it’s probably bullshit. If you go for heavy power without warming up properly, you can experience a quick dizzy spell, so maybe it was a case of him hitting a first take after a night of rogering, and remarking, “Jesus, that made me dizzy!” and the world then playing a game of Telephone, morphing it into “Tom Jones FAINTED!”I tried to find a good live version; would love to see this feat performed in real life; unfortunately, every live version is tuned down. Original is in Bb minor. All live versions are tuned down to Ab minor. Hell, there’s even a mimed version tuned down to G minor! What was the point in that? He was scared of not miming the high Bb?