Going and coming across time.

Billy Pilgrim has come unstuck in time… He has seen his birth and death many times, he says, and pays random visits to all the events in between… he has no control over where he is going next, and the trips aren’t necessarily fun.
— Kurt Vonnegut, “Slaughterhouse-Five.”

Everything we learned from Michael J. Fox is wrong! You don’t need a DeLorean to travel through time – just a nice butt and the right genes. 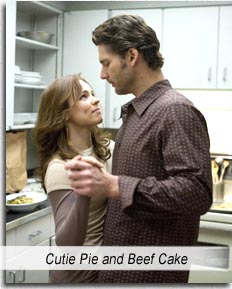 Forget that THE TIME TRAVELER’S WIFE has that unctuous “romantic” tag on its ear, like some rhinoceros lumbering through the predictable pabulum jungle; despite its whispery trailers with jangly poetry-slam guitars and pillow promises that couldn’t possibly be kept, it is an entertaining, intriguing tale of a man who involuntarily travels back and forth in time, whose major problem is not, it would seem, holding down a job or keeping important appointments, but rather that it puts a crimp in his Nookie Schedule.

Despite its title, it is about the Time Traveler, not his wife. We wonder how she fits in as the subject matter when all she does is be cute and get cuter.

Eric Bana is Henry, whom we meet as a ten-year-old in the back of his mother’s car just before they have a head-on collision. He disappears out of the car and reappears on the street, naked, watching his mother die in a Pretty Orange Explosion worthy of John Woo.

Suddenly, Man-Henry appears to Boy-Henry and tells him he is a time traveler. “I am you from the future!” How many times have we heard THAT before when a nice young man wanted to touch us where the judge said it was “statutory something”?

Adult Henry meets Clare (Rachel McAdams, gloriously cute) and she tells him that she has known him since she was a little girl – when he popped out of the bushes naked and asked for her picnic blanket to cover himself. Again with the risqué advocacy that encourages little girls to talk to naked men in blankets.

Clare grows up to be Spinner of the Year (with a tramp stamp to prove it) and the titular Time Traveler’s Wife. She and Henry spend endless hours staring into each others’ eyes and double-dating with Clare’s friends Clarisse (Jane McLean) and Gomez (OFFICE SPACE’s Ron Livingstone), who become close enough to learn of Henry’s anomaly. And only Ron Livingston can pull off that casual amazement so effortlessly.

Makes for some humorous moments, like Clare and Henry’s wedding, when Henry disappears, only to reappear as an older Henry to marry Clare, then reappears later as his Original Self for their first dance. Then he disappears on their wedding night.

That’s when it starts to get real for Clare. No matter how many whispery promises and jangly poetry-slam guitars, this has GOT to get tiresome after a point. Sho’ nuff, it does. Couple of years later: “Do you think I want this life?! A husband who disappears without warning? Who would want that?!” Well… YOU wanted that, honey! It’s not like he volunteers for service in Iraq – he can’t help himself, the poor guy.

From a novel by Audrey Niffenegger, directed by Robert Schwentke, executive produced by Brad Pitt, THE TIME TRAVELER’S WIFE moves fast enough that we don’t consider too many time anomaly questions. In early dialogue Henry establishes he has tried to change events, but they happen anyway. And the movie engages in only marginal scientific dabbling, connecting genetics to time travel, giving Henry’s condition a formidably silly name – chrono-impairment. (Milk shooting out of nose stifling a giggle.)

They birth a creepily cute time traveling kid, Alba (played by Tatum and Hailey McCann at different ages) and the movie departs from Romantic Movie Protocol by foreshadowing an inexorable tragic end.

But with Henry always traveling back and forth in time, we are left with future hope for snatches of happiness.

And at last we figure the reason for the Time Traveler’s Wife – with her snatch of happiness.