Choking on the Yellow Thick Chode. 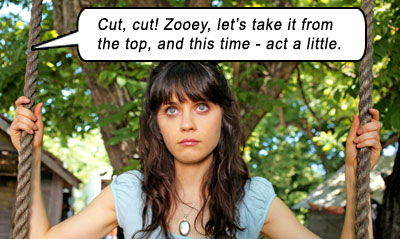 Honestly, I don’t know how Zooey Deschanel continues to get work.

In TIN MAN, a re-visioning of L. Frank Baum’s THE WIZARD OF OZ, Zooey is ersatz Dorothy, named DG (oh, that’s soo street-cred!), lost in the magical world of O.Z. (the Outer Zone – oooh! That’s even more street!), and aided by three inhabitants of the Zone, who are analogs of the Scarecrow Without A Brain, the Tin Man Without A Heart and The Lion Without The Noive; they are named Glitch, Wyatt Cain and Raw (ooooooh! That’s the most street-credible credibleness of all! Please, oh please, may I bow down before you and self-flagellate for my uncouth uncoolness?)

The title refers to Wyatt (Neal McDonough) being a sheriff (tin star/tin man – ha! Get it?) – AND – he is found imprisoned in a steel iron maiden device. Ha! This movie is just full of those things called ideas! (May I please lie on a bed of nails to punish myself for my dearth of originality?) He’s out for revenge on the people who imprisoned him and made him watch re-runs of his family dying. Hey, it might have been an iron maiden, but at least it had cable.

The great Raoul Trujillo is the ersatz Lion “Raw” who makes an assface of himself by looking like a cross between a bum and a Barbary sheep, and being seen so close to Zooey Deschanel. 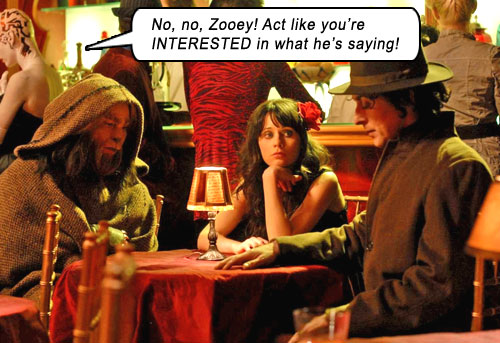 After witnessing the unbridled vapidity of Zooey delivering every line blanker than a bedsheet, we must surmise that those acting teachers that told her she would never be an actor were right. Any jackass can do what she is doing – but it isn’t what anyone in their right mind would call acting.

And Richard Dreyfuss (oh God! Was he that hard up for work?!) is the Wonderful Mystic Man of O.Z.

TIN MAN might have been a dark adventure through new territory in an old realm; there are even some interesting twists involving DG’s parents and their relationship to the Outer Zone; instead, we get Zooey Deschanel reading her lines like a cooking recipe.

Surrounded by actual actors, Zooey does nothing for this TV mini-series (directed by Nick Willing) except bog it in the cowdung from whence she sprung. I constantly ask myself: Are these filmmakers not watching the rushes? It’s like having a veteran cast of British thespians and well-respected American actors – and then having Hayden Christensen play the lead. If you can stand Zooey’s bland delivery, bug eyes working overtime to disguise the fact she doesn’t know what to do with her monotonous face, you may be able to work your way torturously to the end of this 3-parter. Me, I’m busy bowing down before the filmmakers for their bravery in making it through a whole production without laughing at Zooey’s unthinkably ignorant attempts at acting.

Honestly, I don’t know how Zooey Deschanel continues to get work.