The King Of The World meets The Bitch Of The Sea.

Let’s get one thing straight before we embark on this perilous journey into Hollywood History: the only “truth” in this movie is that the RMS Titanic did sink in April 1912 and that Leonardo DiCaprio is prettier than Kate Winslet. Everything else in James Cameron’s TITANIC is marshmallow fancy.

The movie opens in the modern day Atlantic, with a Titanic salvage crew helmed by amiable Brock Lovett (a sun-dried Bill Paxton), who haul surfaceward some very intriguing artifacts. 84-year-old Rose (Gloria Stuart) claims she was a Titanic passenger on its fateful voyage, so is brought aboard Lovett’s vessel to provide information.

In a cheeky foreshadowing of the breath-hammering visuals to come, Lovett’s crewmate outlines Titanic’s death throes, aided by computer graphics (I would hazard a guess that these are the selfsame graphics that the actual movie used as storyboard for its final visuals), before Lovett asks Rose for a firsthand account of the RMS Titanic and she, in a rheumy Percodan haze, starts relating a chick flick with Leonardo DiCaprio and Kate Winslet.

DiCaprio is Jack Dawson from steerage class and Winslet is Rose DeWitt from first class, and their steamy love affair involves promising each other “too many children” and “riding on the beach every morning,” amidst heavy breathing, slow motion and inconsiderate icebergs. 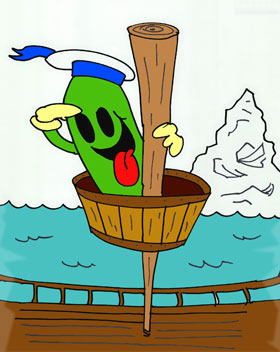 And lurking below the Chick flickiness, the film’s actual premise: White Pride, sautéed in eleven million gallons of seawater.The Chick Flick is that strange, invented Hollywood animal where everything is implied but nothing ever happens between two people supposedly awash in pheromones for each other; where a slow motion embrace and rough breathing suffices for actual sex; where Great Love supposedly flowers between two protagonists after only one flesh encounter, implying that the encounter is the sealant to their monogamy (when in fact, it is the proclivity of humans to profligately mate with as many partners as possible).

Conforming to chick flick rules – where the “lovers” base their Great Love on mere wisps of experience (in TITANIC’s case, one drunken night of lewd sketching, empty promises, backseat sex and lots of giggling) – we will never witness them experiencing the undulations of connubial life; how resolute is her desire to live plainly?; how many children are too many children?; her shopping, his drinking, her parties, his body-shaving… If they plan on riding on the beach every morning, how long will their Great Love last when she starts nagging him to start supporting her spoiled rotten existence with actual income?

Rose’s narration is the anomaly that eats at this film’s veracity: though we humor her spinning a tale of irrelevant romantic rhetoric, when it comes to events outside her sphere of experience (such as private meetings between the captain and crew), she relates them as if omniscient (if we are to regard all the film’s action aboard Titanic as her testimony). Even the iceberg impact is comprehensively covered from all angles (from the lookouts, to the bridge, to the engine room, captain and crowd) by Rose’s “flashback.” Not bad for someone who was backseat bonking her body-shaved boy-man at the time.

Old Rose laments that she “doesn’t even have a picture of Jack.” Maybe that’s why she remembers him as staggeringly beautiful as Leo DiCaprio.

It’s a pity that writer-director Cameron leaned so heavily on the vapid love story as this movie’s propeller (basically expanding the Robert Wagner subplot in 1958’s A NIGHT TO REMEMBER out of all proportion), as the rest of the film is a chest-clenching stunner.

The grandeur of the Royal Mail Ship Titanic is beautifully captured in its restored filmic incarnation. Costuming, characters and exterior shots are paid the utmost detail – although it must be said that, historically at least, DiCaprio’s character was probably treading a time period more acquainted with the use of recreational drugs with his yells of “Woooo!” from the ship’s prow. His friend, Fabrizio (Danny Nucci), didn’t help with the authenticity; Nucci is about as Italian as a Domino’s Pizza, sporting the absolute worst “Movie Italian” accent of all time – the exact same accent my friends and I would adopt in the schoolyard when we were “pretending to be Italian.” Winning their tickets in a card game, Jack and Fabrizio are overjoyed even in their steerage quarters…

…Whilst above the water line, onto the first class decks desultorily rambles young Rose, with her demanding mother (Frances Fisher), stormy fiancé (Billy Zane) and luggage enough to kill three pack-elephants. Elbow-gloved and triple-corseted, she remarks via voiceover, “To me it was a slave ship, taking me back to America in chains.” Try telling that to an African-American, honey, in your big feathery hat and frothy bloomers.

Meeting Jack during a spoiled brat suicide attempt, Rose is drawn to his vagabond swagger and hairless torso, falling for idiot lines like, “You’ve got a fire inside you and I’d hate to see it go out.” (Cameron let George Lucas write that one.)

Film only communicates to two of our five senses. It does not communicate “smell.” It is one thing to be physically attractive at a distance, but the super-privileged have a way of “deodorizing” themselves that is wholly alien to the super-poor. Hence, no matter how much prettier Jack is than Rose, as soon as she stood downwind of his below-decks stench, the romance would have come to an earthy halt (retching optional).

For saving Rose’s life, Jack is invited to sup with the pinky-raisers, who look down their noses at him while he blathers about his itinerant lifestyle as if it was a blessing. Kathy Bates is somehow here as a social bridge between the upper and lower classes. Living the devil-may-care bum’s life of cobbling his sustenance from whatever rat-brained scheme comes along, and literally not knowing “where he’ll be sleeping the next night” may be a romantic notion if Jack is a successful writer or an independently wealthy traveler – but not if he is, in fact, a REAL BUM. Which he is.

An ocean liner has to sink before Rose lets go of this vagrant (whilst staying in Spoiled Byoch character by selfishly hogging the one floating plank in all of the Atlantic).

A well-made, mind-numbing romance this cheesy usually scores low – but Cameron gains his cucumber points purely due to his magnificent boat-tipping.

The climax of TITANIC is a startling visualization of an historic event which no one alive on Earth today saw first hand. Drawing from the latest forensic knowledge, combined with the physics of the process, Cameron places us directly on deck during his nightmare vision. We see the situation mount, from berg impact and apathy, to incredulity and ultimately panic, capturing the violent and colossal majesty of the ship breaking in half and pulling its aft section downwards vertically. 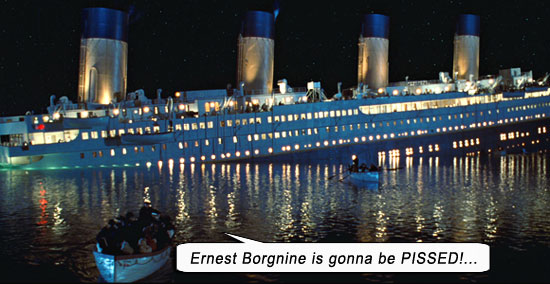 The death throes of the RMS Titanic are astounding in their realism; we cannot help but compare the final scenes of Roy Ward Baker’s A NIGHT TO REMEMBER, with its wholly inaccurate, romantic portrayal of the doomed passengers aboard that black-and-white Titanic singing nobly together as their ship slipped away under them at a 45 degree angle. Not only is collective humanity never that level-headed, the physics of the sinking process was entirely ignored.

With humanity onboard Cameron’s boat ignobly screaming and selfishly grasping and punching and shooting and falling violently onto propeller blades, with smokestacks crushing passengers, decks splintering, cables whiplashing through foaming brine, and the final cataclysmic submersion at a vertiginous ninety-degree angle, Cameron’s TITANIC is – titanic!

If even for a brief, awe-inspiring moment in time, it’s good to be the King of the World.