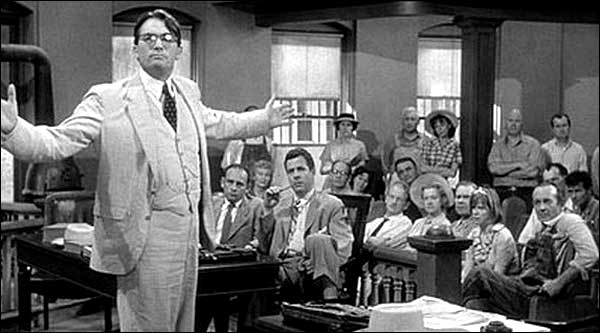 Gregory Peck twirls for his supper, in a revealing white pantsuit.

To Live and Die in Americana.

TO KILL A MOCKINGBIRD opens with a female narrator describing the small town she was raised in, her poetic drawl and the lilt of her language dropping us smack in 1933 Alabammy – “recently told we had nothing to fear but fear itself” – just after the crash heralding the Great Depression; you know, the REAL Depression.

From the 1960 Pulitzer Prize-winning book by Harper Lee, this movie, this tale itself, at first seems like a stream of Southern consciousness reminiscence, as we follow 10-year-old Jem (Phillip Alford) and his younger tomboy sister Scout (Mary Badham) on their daily adventures, with big-eared pal, Dill (John Megna). But MOCKINGBIRD is a crafty coming of age tale; what the kids believe to be their comforting haven – the tired town of Maycomb – turns out to have whitey fangs, and the person whom their wayward fantasies paint as a lunatic killer of children – their unseen neighbor, Boo Radley (Robert Duvall) – is ultimately a mundane dark angel. 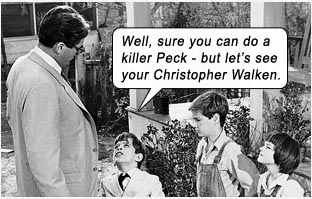 Lording over the proceedings, Gregory Peck as Jem and Scout’s respectable pater, Atticus Finch – wise lawyer, moral pillar, the father we all wish we had; this legendary role cementing him so powerfully as the subdued, majestic voice of reason, at times it seems like Atticus Finch is doing Gregory Peck.

To the kids, Atticus is an old fogey, too timid to let Jem wield a gun like the other kids, never letting Scout fight at school – until new-found respect dawns in their eyes when Atticus shoots down a rabid dog with one shot, Sheriff Heck extolling him as the “best shot in the county”; until Atticus represents a black man in court, the black community standing silently, poignantly, in respect for him, “Stand up, Scout. Your daddy is passing.”

The title is a metaphor for the main plot. Atticus tells his kids of the sin of killing a mockingbird. “They don’t do one thing but sing their hearts out for us.” A person who would kill a mockingbird must be a special kind of crazy. Tom Robinson (Brock Peters), the black man whom Atticus defends, is accused of raping a white woman, and after all evidence points to the woman’s father beating her, after Atticus gives a racism speech that would make Obama proud – yet Tom is convicted. “And the all-white jury agreed.” Before Atticus can request an appeal, Tom is killed for trying to escape.

Jem and Scout sit through the whole trial, their respect for their father growing as large as their disillusionment with the justice system.

In what seems like a coda to the movie, Boo Radley’s identity is revealed, robbing the kids of the last of their illusions. The child actors are magnificent, even outpacing the great Duvall in his first film role playing nothing more than a gentle, enigmatic mute.

TO KILL A MOCKINGBIRD is vibrant with the spirit of America – everything that made America – the intolerance and the acceptance, the killing of innocence and the crushing of human spirit; the poverty and the small towns from whence that poverty emanated; and the children who would grow up with injustice and one day work to thwart it.