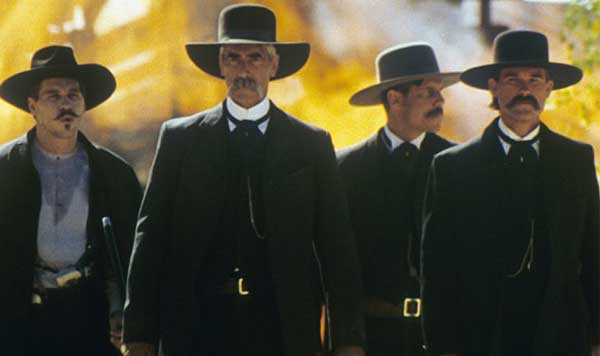 Rock Stars of the Old West.

When The West Was Huckleberry.

The PULP FICTION of westerns, with its vivid dialogue and firestorm set pieces, TOMBSTONE roars like a stallion on steel hooves, in a hail of Peacemaker gunfire and very real handlebar moustachios.

TOMBSTONE is another retelling of the infamous Gunfight at the O.K. Corral, but presented in such an epic, revisionist manner that the ill-fated Gunfight itself becomes peripheral to the characters at the heart of the tale.

Directed by George P. Cosmatos, written by Kevin Jarre, TOMBSTONE follows the fortunes of the Earp brothers, Wyatt (Kurt Russell), Virgil (Sam Elliott) and Morgan (Bill Paxton), and their wayward friend, Doc Holliday (Val Kilmer), as they arrive in Tombstone, eager to settle down and seek their fortune. We meet Wyatt alighting a train and whipping a wrangler across the face with his own whip for beating Earp’s horse, growling in a rasp that would make The Clint proud, “Hurts, don’t it?” We’ve just entered Man Country.

And we meet the famed gambler Holliday at a card game gone sour, lightning wit and lightning six-guns, Kilmer endowing his Holliday with a pseudo-continental accent of his own nefarious design and an educated panache that we doubt anyone on the frontier could have exhibited without being a lightning gun (i.e. he’d be killed in a hot second for being such a dandy). He exits stage right after knifing his antagonist, with a fistful of dollars and a hard, sexy woman (Joanna Pacula). To this day he has never commanded a role so deliciously elitist. (In Earp’s words from an 1896 article: “Doc was a dentist, not a lawman or an assassin, whom necessity had made a gambler; a gentleman whom disease had made a frontier vagabond; a philosopher whom life had made a caustic wit; a long lean ash-blond fellow nearly dead with consumption, and at the same time the most skillful gambler and the nerviest, speediest, deadliest man with a six-gun that I ever knew.”)

Wyatt wants to leave behind his bloody rep as a “Kansas lawdog,” but the frontier is crawling with Cowboys – rowdy, red-sashed troublemaking gunhands who rule the vicinity like mobsters; led by Curly Bill (Powers Boothe) and his sidekick, Johnny Ringo (Michael Biehn, deliciously deranged), the “deadliest pistolier since Wild Bill.” 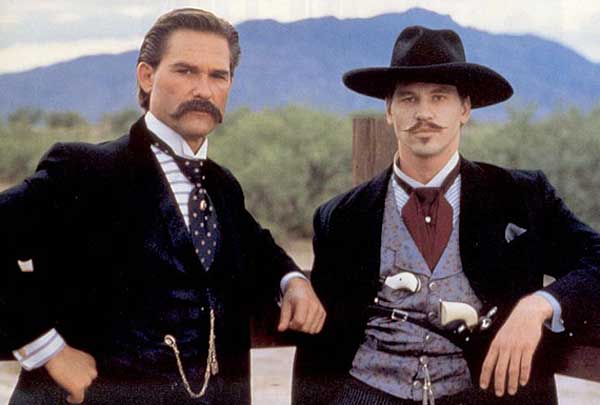 The tale is told with vigor and surprising realism, Cosmatos presenting a vision of the frontier as half brutal reality, half snakeskin Hollywood, all guilty pleasure. (And ten times more entertaining than that other WYATT EARP – poor Kevin Costner’s drawn-out, tedious epic, released in June 1994, coming in a weary second to TOMBSTONE in release date and pure animal fun.)

We sense a frontier realism in TOMBSTONE that we rarely feel in other westerns: there is a constant fragile truce between the ostensible “villains” – the Cowboys – and the townsfolk; the Cowboys don’t live in a craggy mountain castle or in subterranean tunnels, and they’re not out to “rule the world,” everyone is simply selfishly trying to survive in this harsh land and they must all co-exist in the same town uneasily. Also, people have a healthy respect for guns – consequently, there is very little gunfire; unlike John Wayne movies portraying the Western era, there are no mad gunfights (excepting the O.K. Corral, which is portrayed as an unwanted fracas, ended quickly and efficiently). Firing a gun is a last resort and Wyatt would rather not even carry one, or opt to bonk guys over the head with the butts of guns rather than discharge one unnecessarily. So when Wyatt is holding a cocked gun to the forehead of Ike Clanton (Stephen Lang, gratuitously filthy) and tells him, “Your friends might get me in a rush, but not before I make your head into a canoe,” Ike knows Wyatt is not bluffing.

Though there is a town sheriff and a marshal, the audacious lawlessness of the Cowboys forces the Earps to set themselves up – unwillingly at first – as keepers of the peace. The trailers might blurb in a Don LaFontaine rasp, “Justice… is coming to Tombstone!” but by the time the three Earps and Holliday are walking four abreast towards the O.K. to disarm the Cowboys encamped there, even Wyatt asks himself, “How the hell did we get into this?!”

It’s a fantastic reimagining of the ATTITUDES behind the heroism that defined this wild west icon.

TOMBSTONE is not a historical document, piling on one entertaining vignette after another, in no way aiming for chronology of the Earps’ life or deeds. Unlike the Burt Lancaster/Kirk Douglas GUNFIGHT AT THE O.K. CORRAL, this movie’s best scenes appear on either side of the O.K. battle: Doc playing poker inebriated, “I have not yet begun to defile myself”; Ike Clanton raving, “Don’t you ever try to manhandle a Cowboy, cos we’ll cut your goddam pimp’s heart out!”; the vengeance of Wyatt on the Cowboys, “Indeed, sir. The last charge of Wyatt Earp and his immortals”; the macho gunfight between Ringo and Holliday “I’m your Huckleberry!”…

Like the heavy metal thunder of PULP FICTION, every scene in TOMBSTONE reeks of detailed thought and cunning and bite.

Wyatt takes over the local gambling den, forcefully:
WYATT: Just wanna let you know you’re sitting in my chair.
DEALER: Is that a fact?
WYATT: Yeh, that’s a fact.
DEALER: Well, for a man that don’t go heels you run your mouth kinda reckless, dontcha?
WYATT: No need to go heels to get the bulge on a tub like you.
DEALER: Is that a fact?
WYATT: Mm, that’s a fact.
DEALER: [stands] I’m real scared.
WYATT: [moves in] Damn right, you’re scared! I can see that in your eyes.
DEALER: Alright – [reaching for gun] WYATT: [steps to Dealer’s chest] Go ahead! Go ahead, skin it! Skin that smoke wagon and see what happens!
DEALER: [makes no move to draw] Listen Mr. I – I – I’m getting awful tired of you –
WYATT: [slaps Dealer] I’m gettin’ tired of your gassing! Now jerk that pistol and go to work!… [slap] I said throw down, boy! [slap]… You gonna do somethin’ or just stand there and bleed?”

Holliday meets Johnny Ringo for the first time (Latin translation, courtesy IMDb Quotes):
HOLLIDAY: …there’s just something about him. Something around the eyes, I don’t know, reminds me of… me. No. I’m sure of it, I hate him.
WYATT: [to Ringo] He’s drunk.
HOLLIDAY: In vino veritas.
[“In wine is truth” meaning: “When I’m drinking, I speak my mind”] JOHNNY RINGO: Age quod agis.
[“Do what you do” meaning: “Do what you do best”] HOLLIDAY: Credat Judaeus apella, non ego.
[“The Jew Apella may believe it, not I” meaning: “I don’t believe drinking is what I do best”] JOHNNY RINGO: [pats his gun] Eventus stultorum magister.
[“Events are the teachers of fools” meaning: “Fools have to learn by experience”] HOLLIDAY: [smiles] In pace requiescat.
[“Rest in peace” meaning: “It’s your funeral!”]

Act your age, mama / Not your shoe size / Maybe we can do the Twirl…

Towering over every dusty gunslinger and scenery-chomping henchman, Kurt Russell and Val Kilmer in alpha male superhero roles – one big Yum for the ladies, and one big inspiration for the men to become as adept at anything, as Holliday is with his ivory-handled six shooters. Also for the men – the gloriously sensual Dana Delany as Josephine, a traveling actress who would fall for Wyatt from their first meeting (even though Wyatt was married to laudanum-addicted wife Mattie at the time), and who would later become his wife of forty-six years until his death.