Pete Townshend once said, “What’s good about great pop and rock is: it’s sublime and ridiculous at once.” He should know. He wrote Tommy. 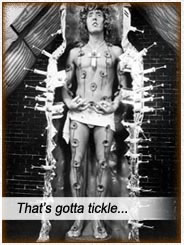 TOMMY The Movie, inspired by The Who’s 1969 concept album of the same name – about a traumatized deaf, dumb and blind boy who becomes a pinball-playing savior – is simultaneously an electrifying musical monolith and a descent into drug-induced kookiness.

Someone had to be high to let Oliver Reed sing.

Blame eccentric satyr director, Ken Russell, whose hallucinogenic vision puts the “higher” in Messiah, jamming the movie with images of sensual nightmare: showgirls in gasmasks, bombers-as-crucifixes, a skeleton with a snake-as-penis, giant pinballs littering the landscape, and Ann-Margret lolling in chocolatey, syrupy goodness.

Oliver Reed is the “nightmare” part. Playing Tommy’s stepfather, he excels at his forte (acting) but his painfully off-key ululations, combined with Ann-Margret‘s melodramatic cheese-vibrato (as Tommy’s mum) make the film’s early segments nigh unbearable. The creation of Viagra can be traced directly to the scene of Reed getting ready to bed down with Ann-Margret. Responsible for more erectile dysfunction than prostate problems or testicular cancer combined, that scene still sends a shudder of horror through my supple thighs.

When the real rock musicians enter the fray, the film suddenly finds its feet. During Sonny Boy Williamson’s Eyesight to the Blind – the first actual “rock” track – Eric Clapton is The Hawker Priest, The Who his acolytes, with Crazy Arthur Brown giving communion, under the graven image of Marilyn Munroe. Oh, sweet Blasphemy, how I love you so!

An indefinable verve is captured onscreen when real musicians mime their own instruments and vocals, which actors-playing-musicians could never hope to achieve: John Entwistle’s fingers clearly ravage the bass fretboard, as Townshend (composer, guitarist and The Who’s lodestar) smacks down his Les Paul, as Clapton bleeds the blues.

Tina Turner burns it down with her crazy-eyed killer Acid Queen and Elton John plies his big-booted trade as the Pinball Wizard (arguably the best re-arranged song for the movie, his own band at the time re-recording Townshend’s song in their own inimitable fashion, substituting piano arpeggios for strummed chords in the song’s key riffs, giving it flight with crazy flipper fingers). Jack Nicholson is the suave doctor with eyes a-sparkle for Tommy’s mother (and who the hell let him sing as well?!). And Keith Moon eats riotous scenery as a leering lecher at Tommy’s Holiday Camp. But it is when Roger Daltrey opens his mouth as the adult Tommy that the film finds its wings as a bird of prey.

In his first onscreen role, The Who’s lead singer, Daltrey – whose vocal timbre and awe-inspiring, full-bodied delivery simply bespeaks rock superstardom – single-handedly elevates the film from an average musical to a legendary rock opera. With his deaf-dumb-blind portrayal as convincing as any seasoned actor’s, as soon as that shirt comes off, he is the personification of Rock God. Thirty years after the film’s release, his tousle-haired, bare-chested, tight-panted visage is still simultaneously an icon of rock rebelliousness and as physically close to a Jesus figure as any simulacrum of Christ.

The stirring final track (See Me, Feel Me/ Listening To You) sees him bare-footed and bare-chested, climbing a mountain, in full-throated passionate song, more than ever resembling that which the rock opera itself tries to deconstruct – a savior. (The fact that Daltrey himself climbed the mountain, no stuntmen to speak of, tells of the times – these were young and crazy rock and rollers who never considered they might have decades ahead to become living legends. As Entwistle once said, “When we started, you had to release a single every three months to stay in the public eye. Whichever came first, your marriage or your twenty-first birthday, was the end of it all.”)

The messages may be in the music, but even writer-composer Townshend would not be able to reconcile the paradoxes inherent in those messages.

Throughout this magnum opus, though Townshend exhorts not to place faith in media-engined, merchandised entities, his own rockstar livelihood relies on the music-buying public doing just that. Even as his messages denounce those who would blindly worship icons, in creating this scintillating monument to rock, he himself becomes an icon to be worshipped. (Just visit my The Who shrine if you don’t believe me.)

Maybe when the album and band were in their infancy and walking an unknown path between ephemerality and longevity, Tommy needed to make sense. With Townshend’s concepts morphing constantly during the writing, recording and eventual filming of TOMMY, he would never adequately explain it, but nowadays he does not need to. TOMMY has achieved transcendence, as much a part of human culture as death and spam.

There are allusions to Oedipus (sexual tension between lubricious Mrs. Walker and her son, Tommy – Ann-Margret and Daltrey – is palpable as eel pie: she bathing in baked beans while watching him on TV; her intimate caresses as she questions, “Tommy, can you hear me?”; he divesting her of jewelry and frolicking scantily-clad in the surf with her); allusions to The New Testament (Tommy with loincloth, crown of thorns and stigmata; recurring “cross” imagery, and scenes like Tommy running past fishermen, singing, “I’m free, and I’m waiting for you to follow me”); and even nods to BENEATH THE PLANET OF THE APES (Holy Bombs as graven images).

With its 1969 release, the Tommy album sold steadily for two years, due to The Who’s steel-wheeling locomotive performances, all tasseled jackets, volume and bellbottoms, demolition guitars, dynamited drums and Roger Daltrey’s glistening pecs. TOMMY the movie propelled Tommy the album back to No.2 on the Billboard charts, six years after its initial release. Townshend once said about performing Tommy The Rock Opera live, “All I remember from that tour was Roger’s chest.”

Townshend dedicated the Tommy album to his Indian spiritual mentor, Meher Baba. Thankfully keeping the lyrics free of mystical raving, profundities can be found passim: “You’ve been told many times before / Messiahs pointed to the door / But no one had the guts to leave the temple” (I’m Free). “Each one of you has freedom / In your heart, without my grace” (Sally Simpson).

But oft-times the hokeyness bleeds through: in We’re Not Gonna Take It (long before Twisted Sister bombasted a song of the same name) Tommy instructs his legions to simulate his Unaware state by plugging their ears, mouth and eyes, to attain enlightenment by effectively “freeing” their senses from the distractions of the world, then singing that “Pinball completes the scene” – What the-? Of course! The eternal correlation between pinball and nirvana…

The traumatic deadening of Tommy’s senses can also be applied to any society where the few overlord the many, i.e. ours. How often we close our eyes and minds to the truth, because those in charge tell us with no uncertainty: “You didn’t hear it, you didn’t see it / You won’t say nothin’ to no one / Never tell a soul what you know is the truth!” (You Didn’t Hear It.)

Only the epic finale (See Me, Feel Me / Listening To You) touches upon any kind of inexplicable epiphany and, as a song unto itself, is more than enough immortality for Townshend never to have to compose another tune: “Listening to you, I get the music / Gazing at you, I get the heat / Following you, I climb the mountain / I get excitement at your feet./ Right behind you, I see the millions / On you, I see the glory / From you I get opinions / From you I get the story.” (Even as it inspires, it contradicts, for the message throughout Tommy is ‘Don’t listen to saviors,’ yet this last beatific paean is to a savior who is clearly being worshiped and listened to – hell, the first words are “Listening to you”! And then “Following you,” and, most damning: “From you, I get opinions…”)

Literally shouting it from a mountaintop, Tommy the son ends a story where his father began it years ago, and director Ken Russell ensures that the Messiah metaphors, the chintzy and great rock music, the stunning imagery, the insightful themes will all take a backseat to this last scene’s smoldering idolatry.

All you will remember is Roger’s chest.

See Me Feel Me (Listening To You)