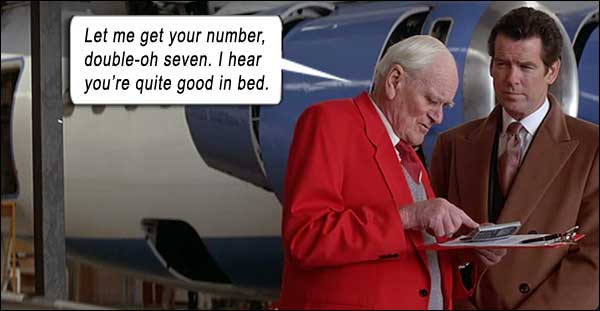 When even Fake News was ethical.

James Bond versus Fox News! And all disinformation breaks loose!

Pierce Brosnan returns as James Bond 007 against Jonathan Pryce as Roger Ailes of Fox News—wait, sorry, Brit-evil Pryce is actually media mogul Elliot Carver, who goes to all the trouble of creating a stealth ship, stockpiling it with missiles of different nations, and then carefully launching a certain country’s missiles against that country’s political opposition, in order to spur worldwide wars – not for the sake of war per se – but to give his media company primacy over all others in the world by reporting this created news literally before it happens. It’s ten steps further than the Fox News business model of reporting world events without any research at all; matter of fact, Fox – with their gaslighting, lies, complicity to murder, kidnapping, treason, money-laundering and obstruction of justice – could NEVER be that principled!

Carver’s Media company only reports what actually happened. They are just not revealing their duplicity in creating the news they report. But Fox News makes no distinction between lies and reality; they just don’t care.

Fox News is worse than a super criminal in a fantasy movie. Let that sink in…

Written by Bruce Feirstein (GOLDENEYE) and directed by Roger Spottiswoode (AIR AMERICA), TOMORROW NEVER DIES opens in MI6 headquarters, on Colin Salmon (the man whom I’ve always said would make a great Black James Bond! Hear me now, believe me later!) coordinating espionage maneuvers for Agent 007, their spy on the ground at a terrorist arms camp. While other officers watch the monitors and criticize 007’s methods (“What’s he doing?!), the head of MI6, M (Judi Dench) stands up for Bond (“His job!”). Whereas she disdained Bond’s machismo and methods in the last Bond entry, GOLDENEYE, here she has come around to his “boyish charm” it would seem.

We will find out later this weapons Farmer’s Market is where Carver bought his various international weapons for his Machiavellian, megalomaniacal plan. He meets with world media leaders on a split screen, in a flashdance of spurting headlines that have not happened yet, then delegates his mayhem To-Do list to his Aryan-blond man-mountain Stamper (Götz Otto). 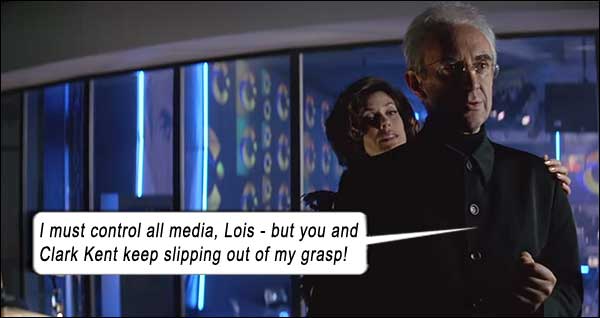 Since “computers” were so Neanderthal in the last Bond movie, just two years ago, it’s pertinent to note that computers are ubiquitous in this movie; Carver even carries a kind of iPad; a testament to how quickly we all got used to them in our daily lives. Carver gloats: “Words are the new weapons, satellites the artillery” … Yet someone still felt the need to explain “…the GPS – the Global Positioning Satellite…” (snigger – but we can’t be too harsh on them 90’s cavemen – in fifty years’ time, think how they’ll be laughing at our attempts at driverless cars and Wolf Blitzer holograms. Speaking of Wolf, M quipped in GOLDENEYE, “Unlike the American government, we prefer not to get our bad news from CNN”. And in this day and age, I can’t figure out whether this was an insult to the U.S. government or CNN. Fox News reported it was definitely insulting the U.S. and CNN, because Obama and Muslims.)

Q (Desmond Llewelyn) bequeaths Bond a self-driving, rocket-launching, tricked-out BMW (which will be a great action gag in a parking garage), a cellphone/taser/car-remote, and his parting advice, “Grow up, double-oh seven!”

At the launch of Carver’s newspaper called Tomorrow, Bond meets old flame and Carver’s current wife, Paris (Teri Hatcher, hot off LOIS & CLARK: THE NEW ADVENTURES OF SUPERMAN, 1993-97). Carver is supervillain-jealous that she knows Bond from a previous double-O (as in orgasm). And when you piss off a man with a god-complex, you get the devil bashed out of you. Which Bond gets.

But Bond gets the last laugh, as he turns off Carver’s worldwide inaugural transmission mid-gloat. And for the self-touted media monolith, the glitch is AWK-ward to say the least. Bond also steals a red oblong Encoder (i.e. McGuffin) that makes all Carver’s satellites evil like Fox News.

In the ensuing spy-chase, we meet this movie’s Bond Girl—Wait, you thought that was Teri Hatcher, right? She’s the fake-out Bond Girl – the actual Bond Girl is worked into the tale more subtly.

Michelle Yeoh is Wai Lin – a Chinese spy, also onto Carver’s game – who falls into the action by turning up everywhere that Bond is sneaking around. Every bit as skilled as Bond in fighting, driving, shooting and general sneaking, we feel a cute chemistry between them – two artisans working together; someone that Bond can actually, uh, bond with, rather than smash and run. But, to our surprise, Bond does no smashing, as the filmmakers draw out the sexual tension by making Lin decline any interest in Bond; every time they get physically close during intense escapes, she keeps warning, “Don’t get any ideas.” For a long period, they are handcuffed together and must affect an escape by riding a motorbike creatively while cuffed, jumping helicopters and teasing cowboy positions. The first time they actually “kiss” is near the end of the third act, when Bond must save her life underwater by blowing into her mouth. Remember boys, you can save a drowning woman by blowing into her mouth.

Fun scene with Vincent Schiavelli (a long-faced That Guy whom you’ve seen in scores of movies like AMADEUS and GHOST), an assassin who talks when he should be shooting. Bond knows when to talk – only when quipping after killing someone.

The advent of automatic weapons has really made bad guys look more incompetent than at any other time in the history of bad guys (except maybe a long time ago in a galaxy far, far away). In the (Earth’s) past, when people used to have single shots, you couldn’t be faulted for missing a moving target, but with automatic weapons burping hundreds of rounds a minute (from the quantity of bad guys shooting at our heroes), you’ve got to be a real dog to miss so efficiently so consistently. And Yeoh even gets to go Jackie Chan on some bad guys who apparently forgot to even bring guns. (That’s Jackie Chan’s actual stunt team being kicked by Michelle Yeoh. Coincidentally, her first onscreen job was on a commercial with – Jackie Chan! I’ve officially said Jackie Chan too many times in a movie with no Jackie Chan.)

The ending is quite sudden, with all the fistfights onboard the stealth ship, all the shooting and missing, all the talking not shooting, culminating in a Pretty Orange Explosion that yet leaves at least one lifeboat unscathed for Bond and Lin to get it on dragon-style.

Between the last Bond film (GOLDENEYE) and this one, Albert R. Broccoli died, the legendary producer of ALL Bond films (except NEVER SAY NEVER AGAIN). The outro credits first title card: “In loving memory of Albert R. “Cubby” Broccoli.”

Back in its day, TOMORROW NEVER DIES seemed like science fiction – satellites and iPads and “computers” and telling outright lies in place of news – but in retrospect it looks almost quaint alongside the real life Fox News promulgating its proven lies to a whole ignorant swathe of the American voting population who dangerously regard them as fact. Waitaminute—

Fox News launched in October 1996. This movie was released in December 1997. Was it a dry run for the Fox business model? Words are the new weapons, rednecks the artillery.