Highway to the Gayer Zone.

TOP GUN – the movie that wrested the crown from MAD MAX 2: THE ROAD WARRIOR as the Gayest Movie Ever Made. 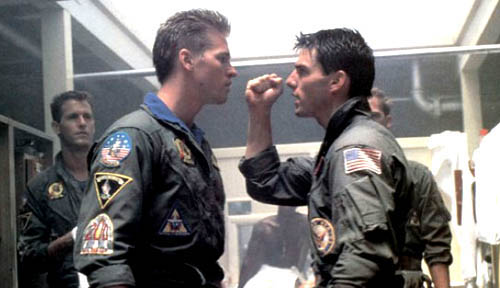 Y’know, I had a gay comment for this picture – but it speaks for itself.

Tom Cruise is Maverick, the pop gun let loose in billion dollar taxpayer war machinery, one of the best fancypants F14 Tomcat pilots stationed onboard an aircraft carrier, though so smug, irritating and insubordinate his commanding officers want to take him down to Chinatown, but he’s the only movie star in the herd, so is begrudgingly sent to TOP GUN school, to learn how to be more smug, irritating and insubordinate.

At Top Gun Academy, Maverick is one of many hotshot pilots in competition with each other for who’s got the best hair. Their slogan is “The Best of the Best,” but no one ever says what they’re the best AT – I’d say it’s pectorals, but others might go for abs, or even toyt botties.

Maverick is not just battling other homosexual pilots with call signs like Iceman (Val Kilmer, with hair frosted so high the canopy of his Tomcat has skid marks), Slider (Rick Rossovich, whom we presume uses awesome lube), Jester (Michael Ironside, who wears bells on his head on his days off) and Commander Viper (Tom Skerritt, obviously named for his big snake), he is also battling the ghosts of his past (his pilot father froze up and got other pilots killed, for the convenience of having traumatic backstory for Maverick to overcome later).

By the way, little known fact: the other fighter pilot called Maverick who is even gayer than Tom Cruise – John McCain.

Maverick outflies everyone with his wingman Goose (Anthony Edwards, who must be a bottom with a call sign like that), and taunts Iceman, “That’s right – I’m dangerous!” That put as much fear into me as a Hello Kitty backpack. It only made Iceman want him more.

Iceman chomps his teeth at Maverick – now hold on: Was that a show of machismo or an invitation to put it in his mouth? The sexual tension is mesmerizing.

Then it’s off to the locker rooms for the homoerotic posedown – suck in gut, stick out ass. Maverick leans on the bench, his toweled ass sticking out in the direction of Iceman, his torso glistening with strawberry body oil. Director Tony Scott cuts away before anyone ejaculates.

We were hedging on whether this was truly a gay movie – until manly Kelly McGillis shows up – now we’re sure! Is that a man in women’s clothing? She’s the Pentagon instructor, Charlie (see? A man’s name), talking about thrust and negative insertion. (Oh, I get it: she’s talking about SEX WITH MAVERICK. And if you didn’t realize that two seconds into her monologue, you’re a ten-year-old girl.) Charlie constantly reminds us she’s a Pentagon instructor, or we’d break out laughing at her pretend performance as a Pentagon instructor. She’s also the love interest for the ambiguously gay guy with the Raybans… oh, sorry, you’re right, that could be anyone – she’s the love interest for Tom Cruise.

He sings to her The Righteous Brothers’ You’ve Lost That Lovin’ Feeling in one of filmdom’s most embarrassing moments. Kenny Loggins sings the nominal “rock” song, Highway To The Danger Zone, which sounds more like a highway to a gloryhole at a men’s truck stop. Later, Berlin’s Take My Breath Away would accompany the Maverick-Charlie slow motion romance, and then start playing on national radio. And wouldn’t stop. Ever.

The soppy love story is inserted sideways into the plot so that girlies who are not taken in by the labia-pounding afterburners of the supersonic jets will have something to cling to after the testosterone subsides.

Man, these gay jokes are just writing themselves…

Nominated for the most flesh-crawling line in a movie: “And I just don’t want anyone to know that I’ve fallen for you.” (Years later, it would take BROKEBACK MOUNTAIN‘s “I can’t quit you” to dislodge this from the top of the pile.)

And who the hell is Charlie fooling instructing fighter pilots anyway? Do they really let blondes with no flight experience yap unintelligibly to a room of semen-throbbing males while wearing those heels?

You lost me at topless male volleyball.

Meg Ryan in a small weepy role with a bad hairstyle, as Goose’s wife. When he dies due to his frosted hair impacting the canopy, Maverick is so cut up about the death of his bum-chum that when we next see him in the locker room, he’s not sticking his butt out even half as much.

All the Top Guns, no matter their former rivalry, have to watch each other’s backs as they fly off on a Real Mission into preternaturally red skies over Russia, or somewhere where there’s a pretend war they can stick their clams into. Who cares? They’re just happy to be watching each other’s backs. The air battle dogfights are man-merizing – it’s supersonic thunder and screaming speed, those swing-wing Tomcats engineered to do one thing and one thing only: make women wet. And gay guys.

Maverick and Iceman survive the mission because of their love for watching each other’s backs. They land, and run into each other’s arms: “You can be my wingman anytime!” “You can be mine!” Correct me if I’m wrong, but are they making plans for who’s going to be the “top” gun tonight? They look so right together that the “affair” with Charlie looks like the wrong type of love.

What was that about topless male volleyball again?…

TOPGUN is actually written as one word – as it is written on Skerritt’s baseball cap.