It’s nothing you can’t find on any jackass idiot moron website that collects videos of people doing jackass idiot moron things (like NothingToxic.com) – but like a more biting version of MYSTERY SCIENCE THEATER 3000, like a retarded version of CANDID CAMERA, like a more intelligent version of comments posted under YouTube videos, television’s TOSH.0 is a wicked sign of our discourteous, disaffected, lurid times – if anything can be called “hip and irreverent” it is this show. 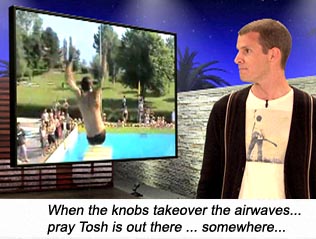 TOSH.0 is one of the few American comedy shows, if not the only one, that is consistently Laugh Out Loud. The show’s structure is genius in its simplicity: we are shown a viral video, no more than a few seconds long, then host Daniel Tosh stands there with the video frozen in the background (much like a news anchor) and simply throws out comments (very much unlike a news anchor).

We see a guy in a wheelchair taking a tumble down an escalator. It’s terribly sad, and painful to watch. But our uncivilized devil side also wants to laugh. And Tosh lets us:

“I’m guessing that’s the second worst accident that guy has had.”
“They want to be treated like everyone else, so it’s okay to laugh.”
“Luckily those metal stairs are so forgiving.”

Relentless. If you laugh too loud, you miss at least two jokes. The writing is raunchy, edgy, whipcrack, a stream of saucy badness that is evil goodness. All delivered by a guy who looks like a clean cut Middle American Catholic boy only recently having touched his first female breast. No person, religion, race, institution or country is safe from Tosh’s ferocious raking. Half the quality is in the diabolical joke-writing, the other half in Tosh’s fearless delivery.

Tosh pushes the pc boundaries of racism, sexism, fattism, atheism, bigotry, anti-Semitism – because we can’t see him coming. Don’t let the unassuming, nice-guy facade fool you; that cheeky smile, that puckish demeanor, exceeded only by his unbridled, vitriolic lightning wit; he’s the young lad who delivered your morning paper on his bicycle – then took a shit on your lawn.

And I think he’s trying to set some kind of record for appearing nude in every episode – during skits that riff on the viral videos. (Never thought I’d see someone more shameless than Will Ferrell so willing to display their misshapen body in public.)

Given that “tosh” is a slang British term of derision, it fits perfectly with the self-effacing bent of the show and/or its content. Created by standup comedian Tosh and Mike Gibbons, TOSH.0 features a few regular segments that almost give it structure:

TOSH.0 is the natural progression to JACKASS. Whereas JACKASS showed us Darwin Award contenders Johnny Knoxville and his braindead posse pulling their off-kilter gags, with the humor stemming from the blunt force of the gags themselves, TOSH.0 employs every nuance in the comedy arsenal to make it bearable – and actually enjoyable – watching Darwin’s Least doing jackass idiot moron things.

And puking. Forgot to mention the puking…