Toying with our emotions.

One of the best-reviewed sequels of all time, TOY STORY 2 continues the tale of the toys from Andy’s room, adding a few characters, upping the chase ante and breaking our hearts with animated toys that are better actors than people. 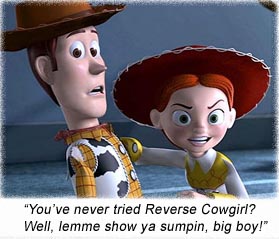 Cowboy Woody (voice of Tom Hanks) is stolen by Al the toy collector (Wayne Knight, still playing a blubbering fat guy – even as a cartoon!). Buzz Lightyear (Tim Allen) mounts a rescue mission with some of the other toys to get him back. But Woody may not want to return…

In their quest, the toys enter Al’s toy store and separate, searching for Woody. They meet Tour Guide Barbie, who joins their quest, while Buzz’s nemesis, the Evil Emperor Zurg, stalks them, and is involved in the funniest STAR WARS joke since George Lucas cast Hayden Christensen as Darth Vader.

It’s ironic that the TOY STORY movies are the best feature film work of Tim Allen’s career, as he imbues Buzz with such vibrant personality and imbues his human roles with the personality of a puppet.

Buzz runs across a whole aisle of Buzz Lightyear action figures and is entrapped by one inculcated with the Space Ranger/George W. Bush credo of Imprison First with no habeas corpus. The “fake” Buzz then joins our toy friends without their knowledge, thereafter calling each toy by their obvious design: “Lizard Man” for Rex and “Vegetable Man” for Mr. Potato Head; Hamm asks, “Where’d you get the cool belt, Buzz?” “Well, Slotted Pig, they’re standard issue.”

Meanwhile, Al calls in a Cleaner on Woody. This sequence is remarkable, accompanied by mind-bending mood music, as the old cleaner polishes, stitches and refurbishes Woody, which is a good thing, but which ultimately removes his identity as Andy’s plaything. The music is reminiscent of the best cute, magical, yet ominous themes from the Disney archives, before Disney Corp became too sanctimonious to bear. (The Cleaner is voiced by Jonathan Harris – Dr. Smith from 1965’s LOST IN SPACE!)

Like the original TOY STORY (1995), Pixar Studios and the genius writers-directors (John Lasseter, Ash Brannon, Lee Unkrich among others) somehow find a way to break off a piece of our hearts, as Jessie recounts the tale of her little girl owner growing up and abandoning her for interests in ponies and boys, all to the strains of Sarah McLoughlin‘s melancholy, nostalgic When She Loved Me. It takes us back to our own childhoods and forgotten toys and carefree feelings and young friends now grown old like ourselves. “You never forget kids like Emily or Andy, but they forget you.” Every 40-year-old man becomes a blubbering baby. It’s embarrassing.

The big question on all our minds: does Woody break off his namesake in Jessie the Cowgirl, who’s a loud, raucous, game lass when it comes to tickling him and enticing him to stay with the Roundup Gang (with Filthy Pete – I mean, Stinky Pete watching out of the corner of his box)? But no – Jessie actually makes puppet eyes at Buzz in the end, leaving Woody to oil his guns on Bo Peep’s bloomers.

When Woody faces the dilemma of choosing between being a star in Japan or returning to Andy who will one day forget him, Buzz turns the tables on him, and in a mirror image of TOY STORY, Buzz emphatically chides Woody, “You – are – a toy!”

Now tell that to us weeping 40-year-olds.