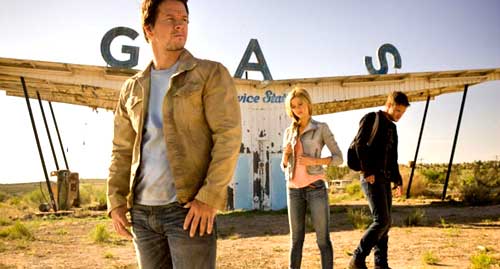 Extinction is just a Michael Bay away.

And we thought the last three TRANSFORMERS movies were stupid. Stupidity, meet TRANFORMERS: AGE OF EXTINCTION. Ironically, this movie has helped the franchise achieve its own extinction.

While a rogue Decepticon works with the American military to wipe out the last of the Autobots, an inventor reactivates a hibernating Optimus Prime – and all eyestrain breaks loose!

In this fourth TRANSFORMERS installment, director Michael Bay (veteran of all previous TRANSFORMER bombasts) takes a script from Ehren Kruger (who penned the last two) and once again tries to annoy us by being Michael Bay.

Movie’s opening shows that Transformers visited Earth back in the dinosaur epoch and even created some dinosaur-transformers (don’t call them “dino-bots” or I’ll puke on your shoes). These mecha-dinos are found frozen in ice at the South Pole in modern times. If only this plot point made any sense at all and wasn’t totally superfluous to everything in this movie…

Mark Wahlberg is single dad Cade Yeager (really? That’s a name?), an inventor struggling to provide for his Euro-model-hot daughter (Nicola Peltz, once just a bad actress in THE LAST AIRBENDER, now, at least, learned how to pose with cutoffs and pouty lips while being a bad actress) and pay his annoying friend (TJ Miller, the zenith of annoying-friend character actors). Cade is given an unwarranted Toby Keith country and western ethos (plucking guitar soundtrack when we meet him drah-vin his truuuuhk) and lives on a non-believable farm, with an unrealistic gigantic barn big enough to conduct mad scientist experiments or hold runway model shows.

And we are introduced to Cade and Annoying Friend – simple working class people – with inappropriate low-tilted action angles as they meet at a rundown movie theater to buy scrap metal. (Relax, Bay! Save it for the giant robots. Get up off the floor and direct like a normal person!) Cade buys a derelict truck and discovers it is the leader of the Transformers, Optimus Prime (as always, voiced by Peter Cullen).

Tucci is a corporate scum who has tapped into the substance that allows Transformers to transform. And he calls it… uh, “transformium.” Yeah, they said that word without laughing. Grammer is a CIA bigwig, an even bigger scum, working with Tucci to build an army of Transformium slaves under the guise of serving the country; he’s also in charge of the militarized spooks (led by Titus Welliver) that are seeking and destroying all Autobots.

IT’S OFFICIAL: It’s reached the point where I cannot stand that visual of military guys in a pack, walking or running with full gear, guns at the ready, someone shouting, “Go go go go go!” You know the visual – overused like Americans over-use torture. Yet these guys never actually achieve ANYTHING (even that imaginary fake kill of Osama bin Laden is under contention), unless it’s busting down a door to arrest some drunk guy in a wife-beater, i.e. an opponent so far below their level of threat it’s like swatting an ant with a bazooka. I cannot stand them, their penis-envy accoutrement, their overblown armaments, their black SUVs tailgating, their misguided ethos, their whole presence is just comical. They’ve become a running joke under America’s noses. The rest of the world laughs at these incompetent boobs and their provincial hubristic ignorant arrogance. Don’t let the high-end production values fool you – here (and in every TRANSFORMERS movie) they fulfill the exact role of the Japanese military against Godzilla – pointless insects.

Welliver wins stupidest line of dialogue. Cade yells at him, “You can’t search my property. You don’t have a warrant!” Welliver: “My face is my warrant!” Wake me when the laughing stops.

Other voice talent wasted as eye-strain: Frank Welker as Galvatron (who has voiced countless TRANSFORMER movies and games), Ken Watanabe as the Samurai Autobot, Drift (is that racist?), John DiMaggio as Crosshairs, Robert Foxworth as Ratchet, and John Goodman as Hound, a fat, cigar-chomping Autobot (why is he fat? And is he getting any edification or mechanical nutrition from that metal cigar? And what’s the utility of those metal shavings that make up his “beard”?).

A trend in movies: the bad guys used to be the good guys. Our heroes and good Transformers are being hunted by the CIA, the prescribed agency that used to supposedly take care of us (for their own selfish agendas, of course). Whereas they used to battle the Russkies, Nazis and North Koreans for “freedom,” now they blatantly attack their countrymen for their own personal gain. It’s like they’re not even “American” any more, but a parallel sovereign nation that resides within American crawlspace. And it’s acceptable to show that in movies now! All façade is dropped – they don’t even care that we know that they know that we know. Doesn’t that say something about the insidious way they’ve downtrodden us so completely?

So let’s get this straight, Movie Maniacs, because I can’t quite believe the plotline myself: The Decepticons, which are demonstrably evil, are working with the humans (notably, the CIA exclusively) to rid the planet of Autobots, the robots that originally helped humans get rid of Decepticons that were trying to destroy all life. And the CIA is willing to kill people who get in the way of them killing Autobots. Yeah, it all makes sense when you put in so much unnecessary slomo and fluttering American flags.

Cade’s annoying unappreciative ingrate daughter somehow ends up on the Decepticon spaceship and Cade must save her, with the help of her secret boyfriend, race car driver Shane (Jack Reynor), who was technically statutorily raping her, until the movie puts us at ease by citing a “Romeo and Juliet” clause that says he’s allowed to do so. (That’s Statute 2705-3, guys. Keep that number in your wallet, next to the number of your lawyer.) If there was any space left for humor, the writers try for it with this unique dynamic of the annoyed dad and discovered boyfriend working together for a common cause. Shane tells Cade: “I’m not here to help you get your daughter – you’re here to help me get my girlfriend!”

Then: pointless battle that gets everyone nowhere – no shrapnel hits anyone, no glass cuts anyone, no clothes get ripped, no hair gets mussed; everyone still looks runway-model-hot, and that’s all that matters – until Octopus Prime goes and gets some dinosaur robots. Then things get really stupid…

I guess that word “extinction” in the title allows the filmmakers to play fast and loose with the mecha-dinos. If this was the reason you came, you were short-changed, as they only appear in the last few minutes of eye-strain. They’re the cavalry that Omnibus Prime recruits near the end of the movie, riding a tyrannosaur robot into battle, leading the other dinos (a triceratops, a pteranodon and I think I saw Barney), like the Eagles from LORD OF THE RINGS. Why didn’t he do that in the first place?

But I must ask the alien creators of these mechanical dinosaurs: What exactly was their original purpose? Why don’t these dino robots communicate in English, like every other robot? Why do they seem to have the reasoning capacity of well-trained pets? Did you idiots create them with the same level of intelligence of the organisms they resembled? Because that was stupid! What kind of intelligent race would create these things with the reasoning level of actual dinosaurs?

Answer: the morons who made this movie.