I’m sure the budget of TRANSFORMERS: DARK OF THE MOON could wipe out Liberia’s deficit, so why can’t they afford passable look-alikes for Kennedy and Obama? And while they’re at it, how about a more adept graphic designer, so that when we see a picture of Obama and LeBeouf together, it DOESN’T look Photoshopped?! 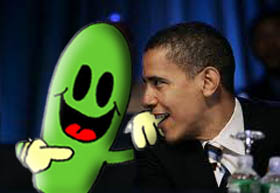 Poffy and Obama (not Photoshopped)

Director Michael Bay’s scrimping on the lookalike and Photoshop budget was probably due to spending it all on the CGI to render those big fat robots that keep jiggering my eyeballs into myasthenia when I try to focus on them changing into cars and planes and tiny annoying wise-ass machines.

In this sequel to the two TRANSFORMERS movies, Shia LeBeouf returns as jittery Sam, friend of the Autobots and their leader Optimus Prime (voiced by Peter Cullen), once again thrown into the thick of the galactic Autobot war against the Decepticons, led by Megatron (voiced by Hugo Weaving). Kevin Dunn and Julie White return as Sam’s kvetching parents. Sam’s inexplicable girlfriend this time is Rosie Huntington-Whiteley (who has had so much cosmetic beautification done to make her look pretty that she’s actually bordering on ugly – but with an ass so delectable that it guarantees she’s too dimwitted to realize that’s the only thing she’s good for). Patrick Dempsey shines his pretty face into the proceedings, and Frances McDormand tries to serious it up and fails. All the familiar players are here: Josh Duhamel and Tyrese Gibson are still army guys in denial that their pathetic guns are not even tickling the bad robots; keep firing, guys, maybe they’ll have pity on the cost of the ammo you’re expending for no reason and fall over. 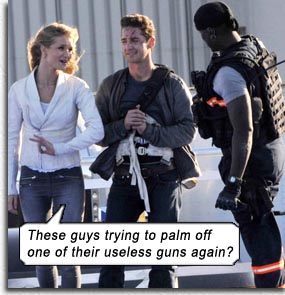 John Turturro again makes loud noises as the eccentric conspiracy expert, at such a mind-bending level of overacting, that Ken Jeong has to make his ass bleed to out-cheese him; and Alan Tudyk as Turturro’s aide has to drive it to ambiguously Euro proportions just to get on the credits. Not content with sucking up oxygen as his character, Turturro visits the Clown Prince of Stupid on The Bill O’Reilly Show and channels The Jesus.

Apparently, Apollo 11 landed on the Moon in 1969 due to a government conspiracy (the conspiracy theorists were right again!), seeking out a crashed Autobot spaceship. Suffice to say, the inhabitant of the spaceship – a giant Autobot called Leonard Nimoy (voiced by Spock) – comes to Earth to take it over, to the chagrin of drama queen Optimus Prime. The plot of creating a wormhole to the robots’ home planet of Cybertron and bringing the whole planet through to Earth-space is surprisingly cutting-edge science. (This plot device was also used in THOR, 2011.) If only I wasn’t blinded by that stage, I might have witnessed this exciting development.

I did witness one incredibly fun moment when Sam is inside his Transformer car named Bumblebee, and “Bee” must transform from a car shape to a robot shape to escape an obstacle, leaving Sam to fly through the air screaming for a few seconds until Bee re-transforms into a car and grabs Sam back into him.

That is undeniably the focus and focal point and high water mark of DARK SIDE OF THE MOON – the effects. Without them, this movie would not exist. Maybe Japan might have made a TRANSFORMERS movie with a guy in a rubber suit (Jet Jagaaar!!) but the art of computer graphics had to reach this state to do these mighty machines justice. This movie succeeds on its magnificent, majestic, dynamic visuals. And the razorwire Dune-sandworm robot is amazing to behold. The main story of the Manchurian robot plot is very workable (Spock even drops one of his legendary lines, “The needs of the many outweigh the needs of the few”), but the movie fails on so many lazy details. For instance, Bee has machine guns in his arms, so when he is taken prisoner, what’s the point in forcing him to hold his arms behind his head like a Holocaust prisoner? It’s like asking a fully armed man to hold his machine guns behind his head.

Optimus is the winner in this movie, in the final scenes channeling Clint Eastwood! He finishes his opponent with one arm (as Philo Beddoe did in ANY WHICH WAY YOU CAN) and guns down his enemy in cold blood (as Eastwood’s many avengers have done) – but does he have to end every TRANSFORMERS movie with a cheesy speech about the nobility of mankind? He’s starting to sound like Richard Crenna reminiscing about Rambo.

How do these humans come away from fighting these sharp and pointy robots without one scratch? After the hullabaloo, Sam and Pear-Ass have fallen off buildings, been blown up mid-air, have dodged tank-killing bullets, falling debris, explosions; when they share a final kiss, HE looks like he’s just returned from the Battle of Stirling in BRAVEHEART and SHE looks like she’s just stepped out of the shower: her dress is still intact and outlining those pear cheeks with no VPL, her hair is still fabulous, her skin is spotless marble. But that Botox makes her look like she’s got her lips on backwards.