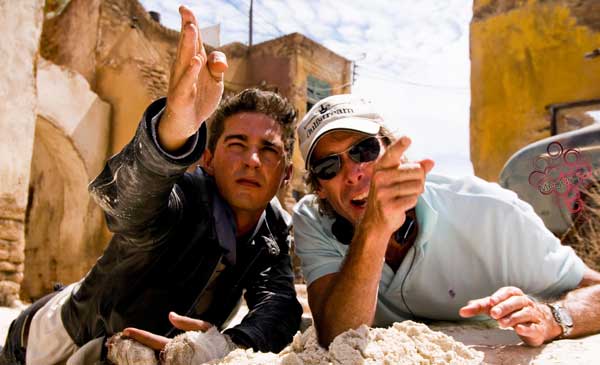 Michael Bay instructs Shia LeBeouf on what he’s not looking at.

Well, what did you expect? 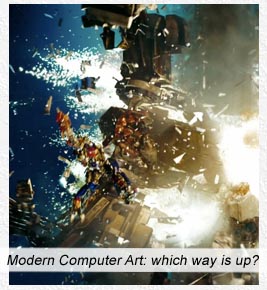 (By the way, how does Megan Fox feel, knowing that the girl who pursues Sam in college (Isabel Lucas) is hotter than her, with the same fluttering fuck-me eyes, the same pert breasts, the same cupid bow lips, red as a baboon vagina in estrus, arcing over nubile wet mouth? How does it make bighead Fox feel to know that spinners like her litter campuses across America? And without toe-thumbs!…)

A shred of the McGuffin from the last movie – the All-Spark crystal – becomes the McGuffin for this movie. But the writers cannily transfer the crystal’s mechanics into Sam’s brain (because as it is, we could hardly care less about the crystal, not that we care that much more about Sam), so HE can be the target of the Decepticons, led by a robot named The Fallen (Tony Todd). Made even scarier by his name being an adjective.

Story is structured along the same lines as a George Lucas tale (i.e. they make it up as they go along), and never have I seen a movie with so many explosions with nothing happening.

TRANSFORMERS 2 is enjoyable, in a “the-only-thing-more-constructive-than-watching-this-movie-is-wasting-time-playing-a-video-game” kinda way.

Suddenly – just like the last movie, in the midst of raping our optical lobe – John Turturro as paranoid Agent Simmons again! Raises the funny level. Mildly. Then, in a movie filled with unnecessary visuals – the John Turturro buffalo shot. And I’m not saying his thonged ass is not a beautiful thing, I’m just sayin’…

They’re robots – shouldn’t they be fighting with viruses online, rather than pushing each other? Why do they blink? How come none of them can aim? These technologically superior behemoths have Faster-Than-Light travel, targeting mechanisms and rocket launchers built into their forearms; I mean, how many rounds can they possibly fire without hitting a damn thing?

Starscream is a JET with ROCKET LAUNCHERS and he can’t shoot down Sam, because apparently Sam is such a good hider – amongst Egyptian huts so volatile, one bullet causes them to explode like gas stations. Guess Starscream can’t keep up with the editor’s lack of continuity jump cuts–

So why don’t the tigerbots scour the huts and find Sam?; what is the purpose of those tiny mini-me-bots except to annoy me?; then Simmons is climbing Khafre’s Pyramid near the giant Decepticon, calling a naval vessel to unleash a classified weapon on it – but why is he in the target area? Apparently so he could crack the 13-year-old mentality scrotum joke…

You lost me at ophthalmologist. 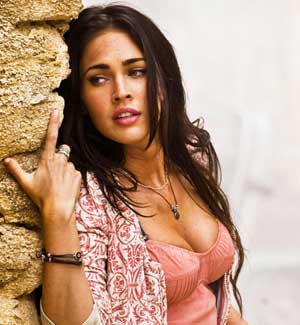 “No matter what happens, I’ve still got THESE.”

It is no secret this movie’s target demo is 13 year old boys. But the movie makes no attempt to hide the fact that the American military are also arrested development 13-year-olds. Such toughboy jargon: “Deploy the 2000 pound J-Dams!” Oh, kick out the J-Dams, dawg! Their probe is called Predator 01 – scary like John Turturro’s undies; their mission is Operation Firestorm – silent but deadly, like the fart of the same name; “We’re rolling strike packages” – oh, not the strike packages, Cecil! Not the strike packages! “Task Force Ripper – execute Lightning!” – that oughta scare the big things that are not harmed at all by our weapons.

Josh Duhamel and Tyrese Gibson reprise their roles as military guys in denial that their bullets are useless. They talk real tough to impress 13-year-old boys and keep firing.

If the Transformers were not so radically detailed, I wouldn’t be in so much pain. If they looked like the Hasbro toys they were inspired by, they would be cool, streamlined giant robots. Instead, the onscreen designers try to melt the vitreous gel in our eyeballs with more mechanical ganglion than the human eye could possibly digest.

A Blackbird jet transforms into an old geezer who insists on giving us more illogical backstory about the Original Gangstas – the Primes who came to Earth during caveman times who turned into rocks to protect a magical Spear of Destiny and then ate Little Red Riding Hood. Or something.

Optimus Prime is killed by the head Decepticon named Megatron (Hugo Weaving), but is resurrected with some magic dust that reconstitutes itself into the Spear of Destiny that Sam stabs into his chest. Just like Jesus, except more believable. Then he pimps his ride with some hardware from the Blackbird and conjugates the adjective robot.

Don’t you just love it when a deus ex machina comes together?

But we can’t see anything because it’s all just a mash of mechanical CGI. I hope the good guys won. Megan Fox’s boobies seem to be okay. That’s all that matters to 13-year-old boys.