Where Girlfriends Fear To Tread.

You need not watch TREKKIES (1997) to understand TREKKIES 2. No sense in hurting your intelligence lobe twice in the same area. 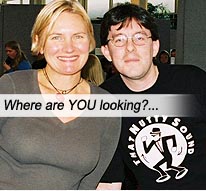 Where TREKKIES examined the extreme depths American Star Trek fanatics plumb in their quest to creep out their more sane human counterparts, TREKKIES 2 does the same thing abroad.

And what a broad. Denise Crosby, our docu-movie’s globe-trotting host and executive producer (and Tasha Yar from STAR TREK THE NEXT GENERATION) apparently only owns t-shirts two sizes too small for her straining bust – which is perfectly congruent with the effect she creates with her audience, as I discovered that in staring at her scientifically over-proportioned chest and its obvious anti-grav facility, my PANTS suddenly feel two sizes too small for my straining thighs.

Paying absolutely no attention to this film (for fear of finding sense in its senseless enterprise), I can only briefly outline its thrust: Crosby uncomfortably interviews TREK geeks from Euro nations – proving conclusively that even in Sweden, there is a Deep South – then catches up with many of the U.S. übergeeks from the original TREKKIES, ostensibly to see how they’ve, uh, progressed, but ultimately just to laugh at them again. 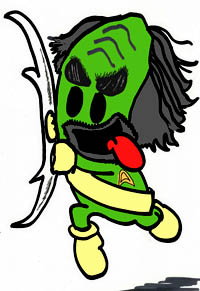 Bringing her breasts to bear on pathetic man-boys more enamored with their toy collection than her mountainous mammaries proffered like Trek-alicious casabas at a Hawaiian luau, Crosby’s barely-hidden contempt for her interviewees is what creates the uncomfortable air, as none of the uniformed Star Fleeters or Klingon undergraduates can perceive the irony or sarcasm in her demeanor. At times, the pedestrian guilelessness and witless naïveté is too painful to watch. They may author whole texts on Klingon vernacular or starship design, yet their grasp of human behavior has not developed past the third grade.

Take, for example, the silly shrike from TREKKIES (Barbara Adams) who arrived for jury duty wearing her Star Fleet uniform, insisting she was “a Federation officer 24 hours a day.” (One would imagine that Federation officers would receive adequate enough medical coverage to fix that overbite, honey…) TREKKIES 2 finds her even more ensconced in her deranged fantasy, with the gutless, politically-correct populace humoring her at her office job, then backing away slowly with fake smiles. In a more sensible era, she’d be either flinging herself against a padded wall in a straitjacket or smartly recanting her delusions when she saw the men in white approaching her with said jacket.

Then there’s young Gabriel Köerner, for whom we can summon a modicum of respect, as he has parlayed his obsessive fascination with Star Trek effects design (as seen in TREKKIES) into an actual career (at this date, having worked on THE DAY AFTER TOMORROW, ENTERPRISE, LOST and BATTLESTAR GALACTICA). His marriage (you heard me right: marriage – to a woman of the female gender, even), though not making him any less geeky, has nonetheless given hope to 35-year-old Trek-Virgins everywhere. 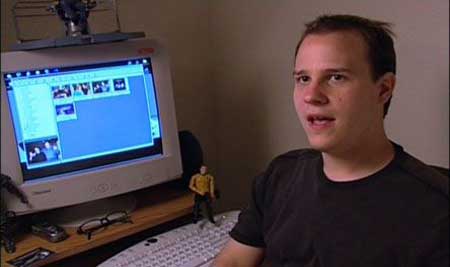 “I was once a STAR TREK fan. But I’m okay now.”
Gabriel Koerner on the road to real life….

Though the raison d’être of these films is ostensibly to pay homage to the Trek fan’s obsession, presenting such a glut of geek-cheese is actually detrimental to the cause. Hammering the viewer with doofus after doofus is no way to endear the cult to the general populace. A fan lets slip his inner dweeb at a smalltown Trek convention in TREKKIES, “It started off small and now younger people are coming. This year, we had a girl come and everything.” (Verbatim.) At least TREKKIES 2 actually sports some hot chicks! For this reason alone, it is miles above TREKKIES. Not that “hot chicks” are any kind of yardstick for intelligence, but their presence portends a more balanced lifestyle for the geeks and presents a more balanced perception for viewers.

But the sad fact is, these obsessive-compulsives do not simply flatter their heroes through imitation. Unlike Köerner, few of them ever parlay their talents into any of the professional fields associated with the TREK universe (entertainment, science, graphic design, catering, lighting, carpentry, aeronautics, etc.). Most of them are all-too-obviously addicts channeling their compulsions into this particular avocation, as opposed to drink, drugs, kleptomania or porn. And the truth is, when pastimes/diversions attain the level of addiction displayed by some of the more notorious fanatics that the TREKKIES movies highlight, it can only be detrimental to one’s physical and intellectual well-being.

As examples of physical detriment, take the cast of “filk” singers at Leslie Fish’s gathering; a busload of people whom we’d have a hard time convincing ourselves needed saving if teetering over a cliff. Not that being “ugly” or “undesirable” is a bad thing – it can’t be helped – but just as extremely beautiful people assume a certain mind-set, so too does the other end of the spectrum, ostracized in subtle and sometimes blatant ways by the good-looking contingent, their personality traits eventually reflecting their perceived segregation, skewing their self-esteem and self-image. This has nothing to do with political correctness – it is a Nature/Nurture issue. Yes, feel sorry for them. Like any anonymous alcoholic, they need our help…

This makes over-privileged, enabled Denise Crosby’s intrusion into this Trek culture even more obvious as an opportunity to exploit these nudniks for profit. How would this smoking-hot model (who is Bing Crosby’s granddaughter, no less) ever hope to get into the mind of this underprivileged caste she feels no affinity towards? It is a case of simply rolling camera – and out of the mouths of nerds the movie shapes itself. Hilarity ensues. Tenuously related to them by her small involvement in the series of their worship, Crosby does not and cannot attempt any in-depth comprehension of their psychoses. She can only look on with a smile as fake as her boobs. Which says something damaging about the psyche and ethics of over-privileged, enabled, superstar children – but that’s another documentary…

Intellectually, Trekkies are determined to illustrate their ignorance in lauding the “science” in TREK. Well, if there was any science at all utilized in the TREK canon, I’d have grounds to retort – since there is NONE, I’ll just back away slowly with a fake smile.

And the grandest idiocy of all, rationalizing the reasons behind the cult’s popularity: “Star Trek has great MESSAGES!” “We could all learn from the VALUES that TREK promotes.”

As I recall, there were valuable messages to be learned from THE BRADY BUNCH as well: “Mom always said don’t play ball in the house!” “Caveat Emptor: Let the Buyer Beware,” and especially noteworthy, when Mike Brady advised Greg, “You can’t fight City Hall,” and Greg replied, “Oh yes you can, Dad! Oh yes you can!” Power to the People – that was what Greg Brady was ALL ABOUT! He was Martin Luther King with a white-fro. Bring me my big-collared shirts and bellbottoms from the closet and let me show my two-fisted support of The Brady Messages. Because I’m a philanthropist, of course, not because I’m a loon with no life…