Don’t look for any historical resonance in this version of TRISTAN AND ISOLDE, reimagined yet again for a modern audience, with a blond babe sporting tresses slapping her backside and James Franco flexing his muscles as much as possible.

The Knights Who Say Poff 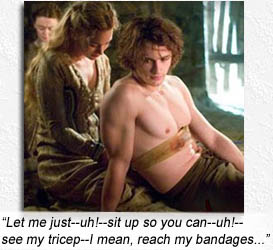 So no aspect of this Kevin Reynolds-directed romancer should be confused with the actual legend it was lifted from (various versions of the tale date back to 1160 A.D.); neither compare it to Richard Wagner’s opera, Tristan Und Isolde; neither be taken in by the audacity of the film-makers, who seem to be trying to insert this story sideways – like Danny Glover’s dentures – into actual history.

In medieval England, Isolde (Sophia Myles) is a spoiled Irish princess, betrothed against her will to a big lusty warrior, the type whose descendants would live in trailer parks and never be able to satisfy a woman. Isolde’s father, King Donnchadh (David O’Hara – eccentric Stephen in BRAVEHEART), is feuding with the British, led by Marke (Rufus Sewell), who has raised the young orphan Tristan (James Franco) as his son, now one of Britain’s best warriors.

At their first meeting, Isolde – so far a frigid prude around her warrior suitor – pulls an unconscious Tristan from the sea and immediately enters into a three-way with him and her handmaid; strips off her clothes and cuddles to “warm him.” Because he looks like James Franco (who doesn’t disappoint with his constant torso flexing).

Like a labyrinth, the plot brings the star-cross’d lovers, Tristan and Isolde, together time and again only through the most convoluted circumstances, never allowing them quality time together without looking over their shoulders or thinking the other is dead at one point or another; constant foreplay interruptus, secret trysts in hidden gardens and endless reenactments at Renaissance Festivals.

All medieval tales look slightly fake to begin with. TRISTAN + ISOLDE suffers from that quasi-medieval taint, when characters look too modern or do not speak Olde English oldely enoughe. Funnily enough, the most authentic medieval movies come from Monty Python.

Now there’s some historical resonance. Where would King Arthur – and by extension, the modern world – be without The Knights Who Say Ni?