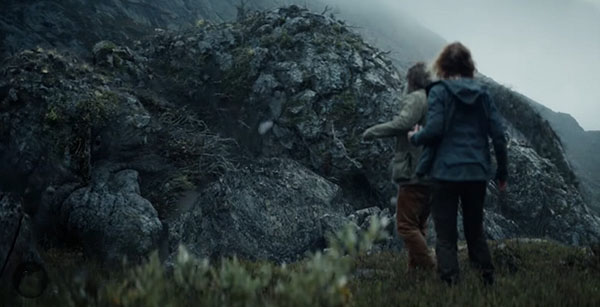 There was the Norwegian thriller TROLL HUNTER in 2010, an enjoyable modern take on the ancient fairy tale legends. Now Norway blasts out TROLL, an even more grounded, more thrilling, more gargantuan meshing of ancient legend with modern warfare…

So… Is Norway cornering the market on troll IP?

During an excavation through a mountain in Dovre, Norway, a gigantic humanoid creature awakens, wreaking destruction in its path, as it tramps toward the Royal Palace at Norway’s capital, Oslo. And a paleontologist must forego her scientific expertise and turn to her father’s old legends to stop it.

There are two major influences that I noted in TROLL, maybe innocuous, maybe plagiaristic, maybe unintentional…

Just a few minutes into the film, I notice how this Norwegian film has parroted American cultural moviemaking styles, especially in blockbuster tropes. (When I view foreign films, I look for the “strangeness” of aspects we take for granted in American movies: there is sometimes no strict 3-Act structure, no redemption arc, no “western” character traits… foreign films regularly throw conventions out the window, and shock our Western sensibilities just by being crafted by filmmakers who don’t need to bow to the Gutless MPAA.)

TROLL’s makers have studiously copied Hollywood filmmaking vernacular, following all those beats that make us feel safe: young woman with father issues, reconciles with father on an adventure; we see the same comedy beats and facial expressions; we see the reticence in imperiling children (the monster destroys helicopters willy-nilly, but then stops one from falling on a child); we see an impact tremor in a teacup (stealing from the best – Spielberg!); there is the father’s journal – the Font of Exposition and world-building; we see the soldier give the BRAVEHEART Inspirational Speech (and even though they are modern soldiers with helmet comms, he gives it ambiently into the night while they stand at their weapons… Then there are the insufferable metaphysical nods: “Don’t look with your eyes, look with your heart,” “It just shows that if you have a little faith…” and many other American platitudes that mean NOTHING… even the tragic death comes at a point where it would in Hollywood movies – just after the redemption…

Norwegian filmmakers have realized that to make tentpole money, you emulate the tentpoles.

One trope TROLL does not follow is the leading woman (Ine Marie Willmann as Nora) being paired with the obvious hunk (Mads Pettersen as Captain Kris, the Sean William Scott of Norway). We know she’s not gonna do the egghead politician (Kim Falck as Andreas), even though he supports her at the cost of his job – so it’s gotta be the chisel-jawed soldier (right?), whom we feel is getting chummy when he tells her, “Call me Kris,” instead of Captain. But NO! See? Now that’s the mark of a foreign film.

As with any American tentpole, there is the conceptual goof: If Nora is the first paleontologist on the list to be called by the prime minister’s office, how could she be scrounging for funding? We meet her during a failing dig, arbitrarily searching for fossils seemingly on “faith” rather than on evidence as to why there might be potential fossils in the area (it’s another typical “Americanized” motivation). But if she is that respected by the government, shouldn’t she be demanding her own budgets? 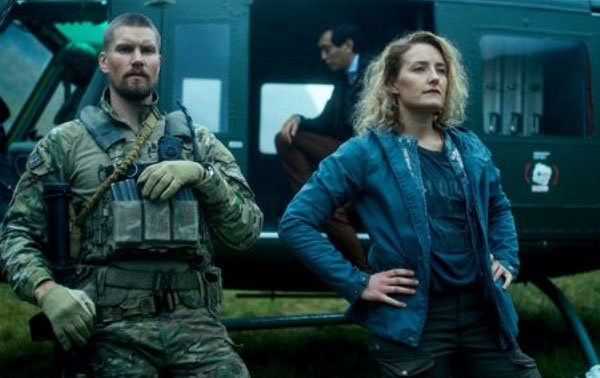 Norway: where Blondes rule, and dark-haired people must sulk in the background.

Ishiro Honda and the makers of the original 1954 GOJIRA have a lot to answer for; I’m not exactly sure if Honda created the trope of the big malicious beast that we could yet feel sympathy for (amongst the rash of ‘50’s and 60’s American releases that pooped out big malicious one-dimensional beasts that we could annihilate in good conscience), but they sure popularized that trope with GOJIRA – a powerful beast at odds with humans who have encroached on its environment, thereby precipitating its confusion and rage, as it lashes out not in anger but in alienation and sorrow.

Every Godzilla movie follows the protagonist convention – Scientist, Soldier, Politician and Annoying Kid (you know, the kid whom the army would take orders from, because that’s okay in times of Godzilla). TROLL has the scientist (Nora), the soldier (Kris), the politician (Andreas), with the Annoying Kid role played by Nora’s dad Tobias (Gard B. Eidsvold), not because he’s annoying – he is actually the heart of the movie, bringing the comedy and empathy – but because he’s the civilian whom the army takes orders from, because that’s okay in times of troll).

Like GOJIRA, they walk in the monster’s footprint; like Godzilla, this “monster” is, in fact, the victim, and the audience is manipulated into rooting for it, or at least, rooting for it not to die. Like Godzilla, it weathers a military attack, and, like Godzilla, it smashes its way across the country in search of something, in this case, its ancestral home. (The trailers and the outro use Grieg’s In The Hall of The Mountain King motif. It’s not just cutesy – it holds deep meaning to this story.)

And in World News, we see the Japanese broadcast, with the anchor asking, “Could it be the Norwegian Godzilla?”… Of course the filmmakers know…

Co-written by Espen Aukan, and co-written and directed by appropriately-named Roar Uthaug, TROLL is a wonder to behold, thrilling action and seamless efx; the skin texture on the beast made to look like grass and rocks for camouflage, and sporting a long clubbed tail for maximum non-human vibe.

These super-natural legends originated in European nations, so who better to pull off such a mythic tale with such respect and empathy than Norway? I tried to contact the fairies and wood sprites that lurk in the deep European forests for comment, but they never return my calls.