As gut-wrenching as APOCALYPSE, as heartfelt as RYAN, and as filthy as fuck, TROPIC THUNDER is another in the small oeuvre of Ben Stiller writer-director-actor comedies where Stiller goes “full retard” for maximum satirical jungle juice.

Action movie juggernaut, Tugg Speedman (Stiller) and a platoon of spoiled-rotten actors (Jack Black, Robert Downey Jr., Brandon T. Jackson, Jay Baruchel), are having spoiled-rotten-actor issues while filming a cheddar-cheesy Viet Nam war movie with their frazzled director (Steve Coogan) – until their military consultant (grizzled Nick Nolte – that’s kinda tautologous nowadays) suggests they be air-lifted into real jungle in Southeast Asia to man them up, whereupon Tugg is captured by real guerillas (whom he thinks are actors), with his platoon forced to use their cheese chops and fake props to save him.

Plucking references from APOCALYPSE NOW, SAVING PRIVATE RYAN, PLATOON, the RAMBO series, THE DEER HUNTER, BRIDGE ON THE RIVER KWAI, the cinematography sometimes brushes up so close to those classics it is eerie.

We sometimes mistake Stiller for a mediocre talent when we see him as Actor Only in drab dishrags like MEET THE FOCKERS and ALONG CAME POLLY, or mediocre milestones like MYSTERY MEN and DODGEBALL – but we need to separate those acting-only jobs from his personalized writer-director-actor projects.

This is the same man who brought us the brilliant – yet too-quickly-canceled – THE BEN STILLER SHOW (1992) and after getting his directorial feet wet with the GenX throwaway REALITY BITES, his subsequent writer-director-actor output is from stellar left field: THE CABLE GUY (1996), ZOOLANDER (2001), and now TROPIC THUNDER.

THUNDER is a tribute to the shit-kicking industry of movie-making; self-effacement, narcissism and irony girds the script and fuels the characters: Stiller’s Speedman is everything that Arnold and Stallone were, with ten times the hyperbole; Jack Black is heroin junkie Portnoy, with the fart-driven comedy franchise THE FATTIES; Brandon T. Jackson is hip-hop superstar Alpa Chino, with a soft drink line called Booty Juice; Jay Baruchel is the naive youngster starstruck just to be around legends; and under-used Steve Coogan is the flustered director who cannot control his movie stars.Tom Cruise IS super agent Les Grossman. He owns Les Grossman the way Les Grossman owns the quivering humanity lapping at his feet like surf on sand. This far into his career, somehow Cruise manages to slamdunk an iconic new character into the entertainment melange; unthinkably capitalistic, unapologetically inhumane and goddamn nut-drainingly hilarious. But you won’t know him when you see him… You’ll be loving the vitriol issuing like molten excrement from the fat, bald exec with the acid tongue (he keeps reminding his assistant (Bill Hader), “A nutless monkey could do your job!”) and at some point his mannerism or voice will sound familiar and you will suddenly see through the prosthetics to the Scientologist beneath!

Matthew McConaughey is Tugg’s agent, and still playing that same drawly surfer dude he has claimed as his own well into middle age. Danny McBride is the itchy-trigger-fingered explosives “expert.” 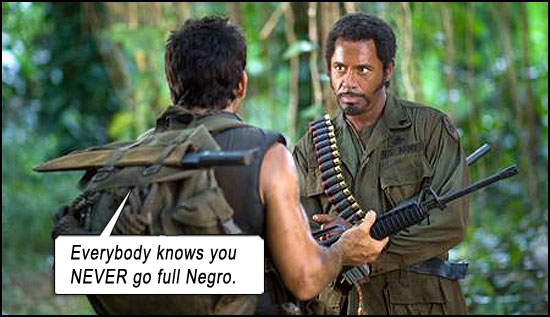 But TROPIC THUNDER belongs to Robert Downey Jr. For once that comedic force of nature known as Jack Black does not steal the show. Downey claims that award for, ironically, playing a black. He is simply astonishing as an Australian, Kirk Lazarus, an actor so immersed in Method that he undergoes “skin pigmentation” to play the role of an African-American, in a nod to that Hollywood idiocy of placing white movie stars in non-white roles.

At first it seems like a joke – but Downey goes deep. And never lapses. He IS The Black Man. He inhabits the skin of Lazarus so fully that most of his lines are ad-libbed – and sound authentically black! He lives the black vernacular, the black swagger, the black inflection… I’m sure African-Americans would pick his slipups (as I pick his fake Australiana), as the actual black guy on set does (Alpa Chino continually lambastes Lazarus for racism), but it’s so damn close to perfect, a troop of white policemen clubbing him would be hard pressed to tell.

In an inspired piece of screenwriting, the SIMPLE JACK subplot, the classic war films and this film’s opening scene itself all come together to create a satirical yet somehow tear-jerking climactic scene.