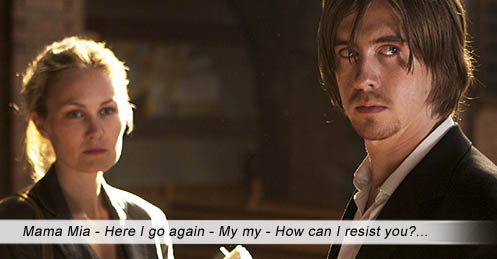 Puts the “troubled” back in teen.

When “troubled teens” are embroiled in gangs (ONCE UPON A TIME IN AMERICA) or drugs (TRAINSPOTTING, REQUIEM FOR A DREAM), it is a life decision, a commitment to those lifestyles that drives their drama.

In the Norwegian film, TROUBLED WATER, it’s different: a teen commits one thoughtless act that has life-shaking consequences long after he tries to atone for it. He was not driven to it by desire for money, addiction, or broken family, just one lapse in judgment.

Pål Sverre Valheim Hagen won a Norwegian film award for this breakout role as Jan Thomas, who, as a teen, kidnaps a 5-year-old boy. We catch up with Jan in his early 20s, as he completes his sentence in a juvenile jail. We learn he is a principled, sensible guy and a talented organist. He still has flashbacks of that fateful day (that reveal ever more harrowing details) but he wants to put it behind him as he starts a job as a church organist.

Jan seems to find his feet, the church job including an apartment, a bike, welcoming staff (like Terje Strømdahl, who asserts “if he can’t get a second chance here, then where?”) – and a female priest hot enough to be in ABBA (Ellen Dorrie Petersen as Anna, in her second film role). And Jan gets to rock out with his stops out.

Until the mother of the kidnapped boy recognizes him.

Poffy playing with his massive organ

Agnes (veteran Norwegian actress Trine Dyrholm), still mourning her son, mother to two other daughters and a husband who looks like Bjorn Borg (Trond Espen Seim) realizes who Jan is as he performs a stirring version of Simon And Garfunkel’s Bridge Over Troubled Water.

Erik Poppe (Scandanavian Director of the Year 1994) unveils this tale (written by Harald Rosenløw-Eeg) not in chronological order. As details of Jan’s crime are revealed, so too is Agnes’s life of subsuming pain for the sake of her family, now opening scabs that will seemingly never heal.

Our allegiances keep flipping from Jan to Agnes and we end up wondering if there is any right resolution to this horrible escalating drama. We are shown every nuanced side of human reaction, from both sides: anger, denial, emptiness, vengeance, warmth, fear, loss of innocence.

As Jan’s life coalesces into couplehood with the hot priest and her own 5-year-old Jens (Fredrik Grøndahl), Agnes is resolute in destroying that relationship completely, to make him feel the loss that he made her feel.

Outside the American system, TROUBLED WATER doesn’t need to conform to any arc of redemption. The sun almost shines for Jan, then the waters get dark and cloudy. Wade in…