All bronzed bicep, leonine mane and CG soldiery, TROY is a glut-fest of regal posturing and battle-flavored man-stench. 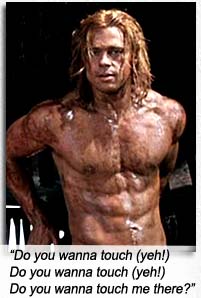 Coax golden-skinned, Bally-gymed Brad Pitt into a taut-buttocked mini-skirt for your movie, and Homer’s Iliad be damned. Compressing the backstory of the ten-year siege of Troy into one week, all deities, dogma and details are eschewed for ant-battles between computer warriors and camera-caressing of Pitt’s Achilles.

Hardly-shaving Orlando Bloom is Prince Paris, who steals away a plain-ish Helen of Troy née Sparta (Diane Kruger), giving King Agamemnon (Brian Cox, elocuting like a serpent) excuse to hurl Greece’s full might against the battlements of Troy, the last bastion of the Known World left to conquer.

Still wondering why actors in Greek or Roman movies – in an attempt to sound more “authentic” – adopt a British accent… Guess Richard Burton has a lot to answer for.