A brazen thug-fest, played like an adventure story for boys. 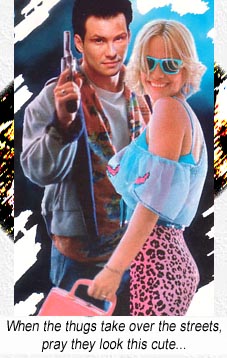 Tony Scott (TOP GUN, DAYS OF THUNDER) directs TRUE ROMANCE, but it’s got Quentin Tarantino‘s stank all over it – delicious dialogue juggled with vicious gun play. Though Tarantino is listed only as “writer,” TRUE ROMANCE seems to be the middle child of what could be construed his breakout trilogy, bookended by RESERVOIR DOGS (1992) and PULP FICTION (1994). A middle child just as misfit and misbehaved as its two outer siblings.

Comics/kung fu geek Clarence Worley (Christian Slater) marries naif hooker Alabama (Patricia Arquette) after just one night of molesting her mungus ta-tas, and resolves to rescue her from debauchery and bad people (which is somewhat ironic, considering he uses a big shiny gun to do so.) Cross country to The City of Angels they flee, with $5 million in cocaine that Clarence unwittingly steals from Alabama’s pimp after a Very Serious Shootout.

So begins a series of vicious vignettes, featuring a smorgasboard of delicious cameos. Dreadlocked Gary Oldman is Alabama’s pimp Drexl, more nigga than wigga (“He musta thought it was White Boy Day!”); diabolical Christopher Walken is unstoppable mob boss, Mr. Coccotti, who slams up against the immovable force of Clarence’s working class father (Dennis Hopper) in the most intense genealogical examination of “the nigger gene” this side of a Klan rally; James Gandolfini is – what else? – a hitman, which would inform his own breakout role soon enough in THE SOPRANOS; Brad Pitt, hilarious in a tiny stoner role; Michael Rappaport is Clarence’s bad actor buddy who just landed a role on T.J. HOOKER (Clarence: “You get to meet Captain Kirk!”); Val Kilmer as Clarence’s inner Elvis monologue.

If ever there was a dialogue-driven scene for aspiring young actors to hone your emotive palette, grab the few pages of Hopper and Walken. If you can pull off the galaxy of nuance between those two acting leviathans seemingly jovially discussing telltale signs of lying and eggplants, yet with the undercurrent of lives in the balance, you’re ready. Call William Morris.

Honorable mentions to Bronson Pinchot (with sweater tied around neck, like he is part of a Country Club who is embarrassed to admit he is a member) as a director’s go-fer, misrepresenting himself as only those whom Country Clubs repudiate can; and Saul Rubinek as the esteemed Hollywood director so egotistic he believes he can have someone killed if they cut him off on the highway.

With the uplifting music of Hans Zimmer sparkling the savage storyline, TRUE ROMANCE is a paean to youth and freedom and impulsiveness and righteous wrongdoing, oozing that insouciant hipness that Tarantino does so effortlessly. And yes, it all leads to that Tarantino trademark of everyone pointing a gun at everyone else.

True love is so much more romantic when hookers and drugs and guns are involved.