No Truth in CATS AND DOGS.

Re-telling of the age-old Cyrano tale with Janeane Garofalo as The Nose and Uma Thurman as The Bod. 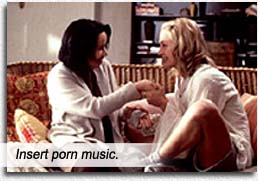 Written by first-timer Audrey Wells and directed by Michael Lehmann (AIRHEADS 1994, HUDSON HAWK 1991- now there’s a powerful pedigree), THE TRUTH ABOUT CATS AND DOGS shares the same contradictions as SHALLOW HAL; pretending a pretty girl is unattractive until she needs to be portrayed as attractive, at which point suddenly the lighting will be numinous and the filter will be soft-focus. At which point I rip the arms off a droid like a Wookiee.

Ben Chaplin is the British love interest who autonomously falls in LUST with Thurman, until he is brought round to realizing that he can “intellectually” fall in LOVE with Janeane. Yes, after 4 billion years, let’s subvert evolution in one afternoon.

Jamie Foxx provides two good laughs – or maybe one – and there are pets and other annoying organisms taking up valuable breathing space onscreen.