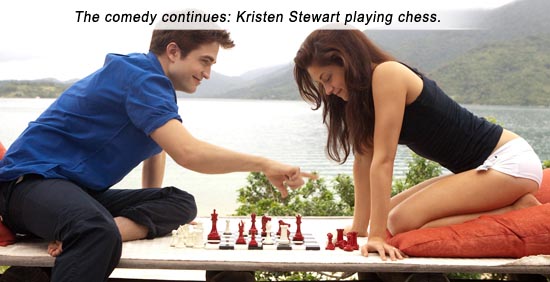 The two-part laborious conclusion to the most trivial love story ever told, TWILIGHT: BREAKING DAWN PART 1, opens with a wedding sequence, exactly like the one in THE GODFATHER, with two small differences: it’s not about New York Crime Families, and it’s not good.

Edward the Vampire (Hayden Christensen doppelganger Robert Pattinson) and Bella Swan the Human (mind-numbingly unwatchable Kristen Stewart) marry. So why is Jacob the Werewolf (Taylor Lautner) still doing his third wheel impression like a fart that won’t dissipate? Hey dude, why are you hanging around? It ain’t romantic, it ain’t manly, and it sure as hell ain’t “imprinting” – that pathetic rationalization you’ve given to your doe-eyed whining. I won’t stoop to stating the obvious here, because everyone over 15 knows what Jacob wants – and it’s not to be Bella’s “friend.” What he wants starts with ‘f’ and rhymes with fuck.

Edward and Bella travel to an exotic location where they proceed to have pretend sex in the surf by the light of the silvery moon. Oh yes, here we go– CUT TO: The Next Morning. Whaaaaat?– After young boys and dumb girls have been waiting 3 whole years to find out How To Have Tween Sex, director Bill Condon and writers Stephanie Meyer and Melissa Rosenberg deny them this small favor? Sucks to be virgins, don’t it, kids?

The bed is shattered, which means they either had:
a) a violent lay,
b) a bad carpenter,
c) a sharknado,
d) Ikea,
e) termites.

She proudly shows him her bruises from coitus, which means he’s doing something right, yet every time she reveals a bruise (like the juvenile practice of showing off your hickeys at school), his meager acting skills register some kind of remorse. The next day, she is with child. Because that’s how babies are made, kids. You see, when a man loves a woman, he puts his…

… and then a monstrous baby grows within two weeks, threatening Bella’s life because she’s still only a human. Though she begged Edward to “change her” during their dry-humping courtship and though he should have transformed her into a vampire before impregnating her, I guess logic has nothing to do with anything by this time in the film.

Proven by the fact that the werewolf clan speak of being “threatened” by the birth of Bella’s hybrid-spawn, the likes of which would apparently topple empires and crack planets. How? Dunno. But “the tribe must be protected.” Uh, okay, guy, run through the forests naked some more and that’ll fix everything. The werewolves discuss the birth conundrum by mind-talking amongst themselves while growling. The meaning of Stupid just went up three notches.

In one of the best comedies of the year, Bella becomes emaciated and lies dying in the vampire clan’s cottage, a basketball shoved up under her dress to make it look like she’s pregnant, while the vampire clan stand around like teen models blowing a lot of hot air, while Edward mopes about with his Tragic Acting Face No.7 and Jacob hangs around like a wet dog smell.

At one point, the vamps give Bella human blood to drink because they discern that “the baby is thirsty.” Jacob, in the room, though as usual with no reason to be, wisecracks, “I think I’m going to be sick.” This, from the guy who mauls intestines and bowels while on all fours covered in fur.

Bella eventually gives birth to a bouncing baby demon. Jacob, as usual, is at the birth with no reason to be, looking up her dress. Bella starts dying in a rush. And the primary thing on both Jacob’s and Edward’s minds is the promise that Edward made to Jacob – that if Bella dies, Jacob can maul Edward’s intestines on all fours. Right, the woman you both “love” is dying in front of you, and the only thing you can think of is each other. The Native Americans have a word for that: fagalas. Surprisingly, Jacob is the first to give Bella mouth-to-mouth. Well, not so surprisingly: three years he’s been waiting to blow in her mouth – while Edward looks on wondering whether to act like a man and beat the shit out of him, or just act.

Insufferable Kristen Stewart lost a lot of weight for this role, and by movie’s end, on her death bier, she looks skeletal (which means she must have missed at least two meals) – but don’t go counting Oscars yet. Losing incredible amounts of weight doesn’t make you RAGING BULL. She’s still insufferable, just skinny and insufferable.

It’s a cliffhanger folks, so you’ll just have to wait and see whether Summit Entertainment sues Bella for breach of contract by dying in this film even though she was contracted for one more TWILIGHT movie. (Oh, I guess it’s not such a cliffhanger after all…)