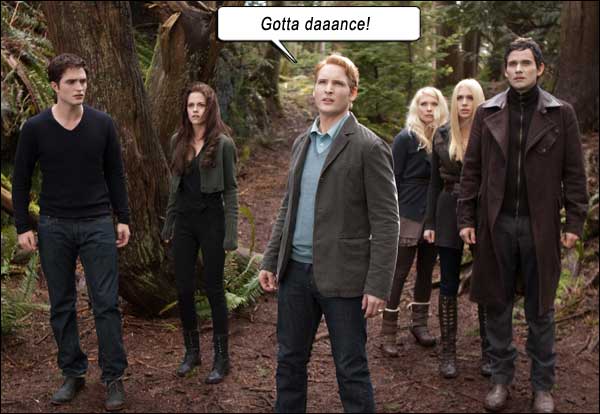 Somewhere along the way, the tween girlie movie series TWILIGHT transmorphed into the painfully overwrought “THE TWILIGHT SAGA,” like there was something extremely important happening between all these vampire models standing around doing nothing and all these werewolf models standing around doing nothing with their shirts off.

So we arrive at the conclusion of author Stephanie Meyers’ series, fully titled, THE TWILIGHT SAGA: BREAKING DAWN PART 2. There’s no real import or meaning to the title, but it takes up a lot of syllables, which in the minds of tweenies and weenies who haven’t yet read any real authors, makes it sooo grown up, like, totallyyyyy.

Bella (Kristen Stewart) is now a newly-created vampire (a newborn) and she and vampire hubbie Edward Cullen (Robert Pattinson) have birthed a bouncing baby CGI monstrosity, which they name Renesmee (played by a real life Mackenzie Foy after she grows out of  computer diapers). Jacob (Taylor Lautner) is still hanging around the Cullen vampire residence like a dog fart after lasagna.

The usual crepuscular cast of Cullen vampires stand around and share line-reads (Peter Facinelli, Elizabeth Reaser, Ashley Greene, Kellan Lutz). Meanwhile, vampire Maggie Grace (known for being TAKEN a lot) sees Bella’s child from afar, and thinks it is a human child that has been bitten and turned into a vampire (which is a sin, as the King James Bible tells us in St. Paul’s Letters To Dracula). She reports to Senior Vamp Dude, Aro (Michael Sheen, leader of the Volturi, which in Latin means “heavy mullet”), who is just waiting for a reason to kill something so that the movie can allow everyone to stop standing around and doing nothing.

This non-issue is what the movie turns on. All it takes is for someone to say to Aro, “Bella is the mother, and Edward is the father, even though we know he looks kinda gay, but trust us, he had The Sex with that brunette chick.” But a battle brews, and so the Cullen clan spend the better half of the movie “recruiting” sympathetic vamps from around the world who will “stand witness” for them, and say what I just said above. Torturous scenes of vampire models standing around pledging their allegiance to not making the movie interesting in the least. I swear, if these people didn’t have super-speed and occasionally run in fast-motion, there wouldn’t be ANY action in this movie at all! (And when they stand around, I find it hilarious that they always stand in pairs, coupled-off and each couple facing each other, like 14-year-olds at a house party scared that someone is gonna move on their boo. Hmm, I guess, exactly like their demographic!) 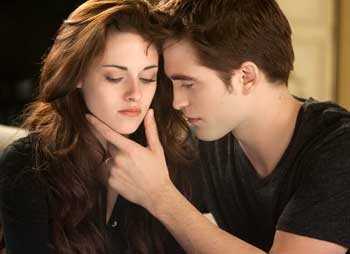 “You wanna have more of that Pretend Sex?”

Speaking of sex, again the movie goes to great lengths to tease youths with slow motion shots of Bella’s naked elbow and Edward’s nude hip bone, before cutting away to them covered in a bed together or in a field of flowers wearing clothes, implying that they did something that only your bigger brother does with cheerleaders. What it is, you’ll never know…

Which raises the whole “baby” question: Since when can vampires have children?! So their sperm and ovum still work like living tissue even though they’re undead? Which means vampires can theoretically overrun the world. Because they’re immortal. The TWILIGHT-heads are gonna counter with, “But she got pregnant as a human, and he ‘turned’ her (bit her on the bum) as she was giving birth, so the baby wouldn’t kill her on the way out.” Sound medical procedure. Which still means his seed is living tissue that carries genetic code; which means that vampires can still take over the world if they used this method on thousands of women.

You lost me at vampire sperm.

Movie opens with a montage of Bella discovering her powers, keeping her thirst for human blood and her acting in check. Instead of a nearby human, she kills a puma about to pounce on a deer, to slake her blood lust – oh, good decision! The predator-to-prey ratio is so low in these parts precisely because of numbskulls like you, who think that killing the puma is noble due to being raised on nature documentaries that paint the predators as “evil.” The millions of expendable deer deforesting the vegetation around here thank you, vampire maiden!

She arm-wrestles Kellan Lutz and wins because – woman empowerment. She can generate a mental shield that protects her loved ones from harm, while another vampiress generates shocks like Electro, while others just make up powers as they go along, because – vampires, yeh. She stands glistening in the sun: “I was born to be a vampire.” Sure, honey.

The art of Looking Menacing While Standing With Your Boo.

I must say, though, Stewart looks absolutely gorgeous here. No more the winsome pouty lass with the irritating pause-acting, she has lost her baby-fat and blossomed, with lush eyelashes, luscious waterfall tresses, desire-brown contact lenses, full cupid-blood lips, her straining A-cups propped up by a B-bra creating an hourglass figure, and even her acting has improved vastly, maybe up to the level of Shatner-adjacent.

But narration was a bridge too far. During the recruitment montage, Stewart narrates like she’s about to hiccup, with a passion reserved for GPS directions, expositing every character’s backstory and special power. Are we watching a movie, or listening to the audiobook?

Jacob, who is still somehow hanging around due to his insipid excuse of “imprinting” on both Bella and Renesmee, reveals his hairy ass to Bella’s father Charlie (Billy Burke), who was unaware he was in a movie series about vampires and werewolves until now. He comes to visit Bella at the Cullen residence, sees their freaky CGI baby, asks her what’s wrong, to which she answers ‘nothing,’ then drives out of the movie forever. 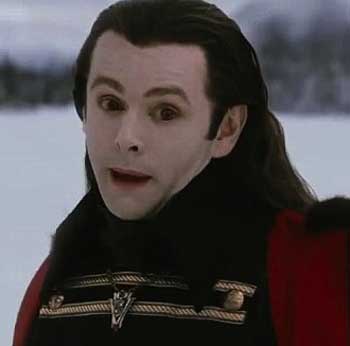 After nothing continues to happen quite a lot, the Volturi, led by pale-faced Aro, march to battle, all dressed like Michael Jackson. The Cullens and their allies are ready, all standing in the snow in couple-pairs, so that Aro won’t make a move on their boo.

Remember, these people are empaths and psychics and are endowed with other powers far beyond human reasoning and imagination, which means they all didn’t have to put on their sports bras and come tramping out here in the snow in the first place; Aro could have sent a trusted aide to mind-meld the relevant info and bring it back to him. But no. Here we are. The conclusion to the most anticipated Young Adult series in history. And it ends with – nothing happening.

Alice Cullen (stunning Ashley Greene) holds Aro’s hand – and there is a massive, pitched, badly-staged skirmish, where legends die and heroes fall. This is it, folks! It doesn’t get any more exciting! The final grand battle of Twilight! Destiny bellows and fates collide, and—-

Alice releases Aro’s hand. Oh, it was just a vision. “After what happened here today, they’ll never forget.” Uh, but nothing happened. In the distance, we see the breaking dawn… Oh, I get it! It all makes sense now—wait—