So it has come to this. After the vampire wars and the werewolf killings, after the tempest of accepting a human unto the clan of the undead, after the dark skies of Forks presage death raining  rivers of blood, TWILIGHT ECLIPSE has come to this, the most chilling decision mankind has ever faced: 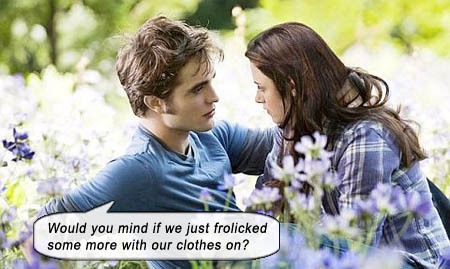 Edward’s abs are pasty and soft from snacking on Bambi. Jacob’s abs are washboard from all that doggy styling.
WINNER: Team Jacob.

Edward and Jacob both love Bella (Kristen Stewart).
BOTH LOSERS.

Edward gets to go on innumerable talk-dates with Bella and her insufferable pause-acting; Jacob gets to pout that Bella never goes on talk-dates with him.
WINNER: Team Jacob.

Due to never meeting Kendrick, Jacob also never meets the douchebags that hang around her and Bella like a wet dog smell.
WINNER: Team Jacob.

Bryce Dallas Howard appears as a vampire, and the same thing happens to me as when Jacob takes his shirt off for chicks.
WINNER: Team Poffy.

Team Edward and Team Jacob team up to battle a clan of vampires that wants to kill them because of their hotness or something, in a CG battle so spectacular I almost woke up.
BOTH WINNERS.